Lurg Mhor is another competitor for the most remote Munro. I think this was perhaps my longest ever Munro day. I seem to remember it was well over 12 hours and although it included an unpleasant start and finish the rest of it was a magnificent walk with the knowledge of being a long way from civilisation.

Looking at the map I decided that I could save about two and a half kilometres each way (five kilometres in all) by starting from a lay-by on the road well to the west of the official start, and going directly south to join the path leading to the territory of the two Munros. I reckoned the only problem would be crossing the river and I decided to take some trainers thereby keeping my boots dry. All this turned out to be a monumental error of judgement.

First of all, from the road I had to climb a fence, cross the railway (illegally I suppose) then climb another fence. It was now several hundred yards to the river and this turned out to be an area of total swamp so my feet were wet before I even got to the river, but in denial I donned the trainers and waded across the river and hid the trainers for my return. Looking back on the event I don’t think anybody else would have been coming that way to find the trainers! What the map did not tell me was that an impenetrable gorse thicket about thirty yards in width bordered the riverbank on the other side. There was no option but to force my way through which was excruciating. Believing the worst to be over I now found myself faced with a deer fence – these fences are about nine feet high and quite demanding to climb, especially with a rucksack. Overcoming this obstacle I was now in a mature wood where a large number of trees had fallen horizontally against my desired route, and with everything overgrown it was impossible to avoid descending into holes and dead branches and climbing over the fallen trunks. This was the most difficult three hundred yards I have ever negotiated, and of course to get out of the wood I had to climb another deer fence. 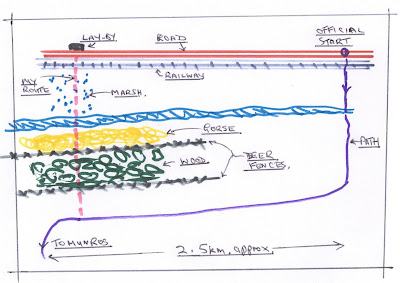 I had now joined the path and the correct route leading into wild country, crossing a high bealach followed by a long descent then crossing a sort of river delta. From here there was a steep ascent to the first Munro. The second Munro, Lurg Mhor, was a continuation of the same massif, but with a substantial loss of height in between. Somewhere along this stretch I met a fellow Munroist who was surprised at how quickly I had got to this point from my start. We carried on to the summit of Lurg Mhor where the sense of isolation was quite marked. We returned together as far as the col between the two summits (my return was by the same route as the outward journey), and I remember seeing my acquaintance disappearing far below as a small speck in the distance along his own route as I neared the summit of Munro number one for the second time.

On arriving at a point on the path within a few hundred yards from where I had joined it after my river crossing I felt the most violent pain in my knee, and I think this was the start of the whole of my knee problems – I could hardly walk. By some inexplicable prescience, the day before, I had bought a single walking pole from an outdoor shop (now defunct) in Kinlochewe. I had never used these aids before and I can’t remember why I bought this one, except that I had seen a picture of Alan Hinkes using poles during his unbelievable feet of conquering all the fourteen peaks over 8,000m which reversed my previous opinion of poles from one of disdain to one of undoubted macho connotation. The pole was indispensable. I managed to reverse all the horrors of the outward journey in much pain. I think that fortunately that was the last planned day of this trip to Scotland.

However good we think our 1:50000 OS maps are they do not tell the whole story and even the shortest distance can turn into a nightmare. Cameron McNeish says in his guide to the Munros “By the time you have completed the round you will be well prepared for almost every eventuality you can encounter in the British hills”. I’m not so sure about that.
Posted by Sir Hugh at Tuesday, July 14, 2009

Glanced quickly at the map and was impressed to discover you'd passed through The Void. Closer scrutiny revealed this to be merely The Wood but I think mine's better. Apart from the physical travails you passed through there was perhaps a psychological aspect too. You had opted for a short-cut and yet the horrors were reducing its justification. Another mental trial was that all this was happening so early on; on such occasions you find yourself wondering whether your experiences are a sampling of what's to come.