On Saturday, with Jill, and dog Jake, we ascended The Calf in The Howgills.


This was my second ascent, the first was on 26th March 2004 whilst visiting and photographing all forty seven trig points on sheet 98 of the OS 1:50000 map (not all on the same day). The view west from The Calf is exceptional looking over the coastal plain to Morecambe Bay and then The Lake District. Arnside Knott is prominent over eighteen miles away and I reckon with a telescope you could pick out my house nestling under its eastern flanks. I vowed that if I visited The Calf again it would be on a bright day to get the best of this view, and the forecast seemed in favour, but cloud and a dull haze persisted, and although views were reasonable they were not sharp enough to pick out detail.

On the previous visit I commented on the number of people about and it was the same again, even more so with rambling parties of “greys” and mountain bikers. Although I admit I am old and grey and also prone to rambling, I can’t admit to being a “grey” or a rambler. 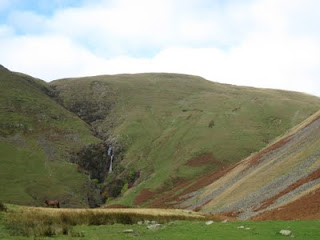 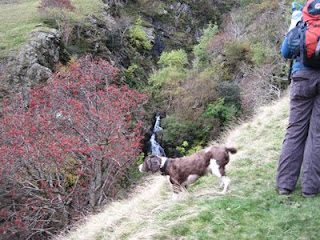 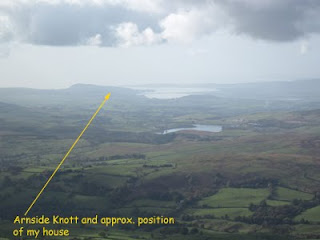 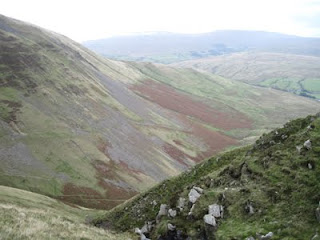 I prefer to climb new hills, and this should now be the aim. Having visited all the trigs on sheets 98 and 97 delineating the area within modest driving distance of home, I have covered all the main tops and it is getting difficult to find something new within reasonable distance.

An area a bit further afield that looks wild, and I would guess not much visited, and worth exploration is The Tweedsmuir Hills south-east of Glasgow. Now that The Munros are out of the way a few days there with the caravan in early spring sounds like a good idea.
Posted by Sir Hugh at Wednesday, October 21, 2009

Some Lake District names end with s, as if they were a plural form. Is there more than one Howgill?

Like you I have been pondering a new digicam. I did some research on this three or four months ago and added my preferred choice to Website Favourites. Just recently the subject has resurrected itself via your blog and Lucy's. Curious to find out what my earlier choice was I clicked on "Favourites" and lo, I discovered I had picked the Canon PowerShot A1100 IS. This must surely be an augury.

BB - The Howgills are actually named as The Howgill Fells on the OS map but common usage refers to them as The Howgills. They are a fairly complex range of hills to the east of the M6 and north of Sedbergh of public school fame. They cover an area of approximately 10km x 10km and are well outside The Lake District National Park. These hills have their own character being more rounded and almost entirely grass covered compared with the more rugged and rocky appearance of Lake District hills. There is no hill called Howgill, but there is a hamlet of that name.

I believe these hills are well used by the physical education part of Sedbergh School.

Are those lavender and deep pink patches on the hill in the last photo heather, or some other flower?

You are traversing some beautiful countryside.

The Crow - The "lavender" in real life is more of a grey and is limestone scree, that is steep slopes of broken up rock.When these are an average size of tennis balls, although they have a much more irregular shape, they provide a very rapid means of descent. You just dig your heels in and off you go and as the stuff slides you are taking steps of perhaps ten feet or more - very exhilarating.

The "deep pink" again, in real life, is a russet brown, and this is dead bracken and in good sunlight it has a stunning glowing quality which epitomises autumn (fall), although not quite as impressive as the colours in Pennsylvania where I visited many years ago at the same time of year.