In Glen Etive, last year, I was crossing a mountain stream raging steeply down a mountain side. It was in spate. I slipped and shot off at speed down a polished rock slab water slide for about fifty feet. I was heading for a thirty foot vertical thunderous waterfall I had seen on my way up. The waterfall terminated in a heaving pulsating pool of wild yellow foam with steep rock walls all the way round and the outlet leading to rapids and further minor waterfalls.

The only thought I can remember was saying to myself “well, I suppose this is it”. The force of water had created a deep rock bowl just before the waterfall and I found myself looking over the rim of this bowl and straight down the waterfall. This would have made a good photo from an angle not many people could have achieved, but unfortunately my camera had not taken kindly to this adventure. 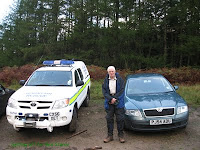 The photo was taken as I set off for this Munro by a fellow Munroist who then went off into the hills. It seems somewhat prescient that

I elected to make this pose next to the mountain rescue vehicle. It was the last photo taken by the inundated camera; furtunately the memory card survived.

I have posted this story because there is a sequel to the bit about the camera so watch this space.
Posted by Sir Hugh at Friday, October 16, 2009

Redhead – There was no great difficulty in climbing out of the river. I was obviously wet through and had lost one of my walking poles. I was on my way to climb three Munros: Ben Starav, Glas Bheinn Mhor and Beinn nan Aighenan. The incident happened only about thirty minutes after the blog photo was taken. Although wet I was not cold and it was quite a mild day for October and I decided to carry on. By the time I reached the first summit I had more or less dried out.

Red Head - Just read your comment more carefully and in answer to your question - no I didn't go down the waterfall. The deep pool before the lip stopped me.

What an adventure! Thank goodness you landed in the bowl.