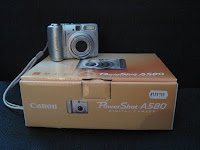 Following the waterfall adventure I went to Fort William and was only able to replace the superior Cannon A590 IS with a Cannon Powershot A580. The replacement had no image stabiliser, which has niggled me ever since.

Last Sunday I was taking pictures locally when the camera demanded new batteries. Cannon Powershots use AA batteries which means that if spare batteries are carried recharging problems are overcome and I have found I can take over 500 photos at highest quality on one set, albeit using the more expensive lithium batteries.

I replaced the batteries, but not with lithium and the camera still demanded new batteries. I tried two other sets without success. I assumed the camera was faulty then discovered the guarantee was out by about a week. I searched the internet and identified the Cannon Powershot A 1100 IS which is an update of the previous two models having 12 instead of 8 mega pixels and including the image stabiliser together with a redesigned slim line body, and other additional features. I decided to buy.

On Monday I rang the original supplier in Fort William and was told the camera really needs lithium or high performance alkaline AA batteries. I tried with lithium and found it worked perfectly. I am sure that had I persisted I would have found this out before buying another camera, but I think the subconscious was at work knowing I had never been satisfied with accepting the inferior specification of the A 580.

I acknowledge your concern with camera batteries since I share it. But a larger obstacle has raised its head. Composing pictures via the pitiful LED screen is so hit-and-miss; even the simple matter of checking the camera's verticality is made more difficult. I decided my next digicam must have a conventional (as opposed to SLR) viewfinder but this jacks the prices up considerably. More evidence of the conspiracy by which manufacturers make money through familiarity with my own needs.

BB - I omitted to mention that the Cannon Powershot range of cameras does have a normal viewfinder as well as the advantage of two AA batteries rather than the rechargeable kind. As far as I know these are the only compact digital cameras incorporating both these features on the market at the moment, and I do not think that the viewfinder has added to the cost which is only around the £130 mark. There is a slight disadvantage in that the resulting photo always takes in a slightly larger area than that seen through the viewfinder, but I find I can make allowance for this, and it is easy enough to do a bit of modest cropping afterwards with modern photo software.