Halfway round my Thursday walk with Pete we are on a roll finding geocaches - I have just found my 300th, but pride comes before...

... I have only been doing this stuff for 60 years and once again I have navigated us onto the wrong footpath.

We are in rocky, wooded limestone country in  Latterbarrow Nature Reserve which is all sheer delight. My shaky interpretation of the OS map tells me there is a  public footpath that will shortcut us back onto our correct route.

We climb steeply on an identifiable path, Pete being thirty yards behind me. As I crest the climb the path ceases abruptly. I am looking ahead and fifty yards away I get a rear view of a large black animal, perhaps a bit bigger than a Great Dane slinking and weaving through the trees - it disappears within about seven seconds (not long enough to deploy the camera of course). The animal is totally deep black and seems to have a sheen more than you would expect on a woolly black sheep.

I tell Pete and we retrace our steps speculating about telling the Westmorland Gazette who regularly publish black cat stories but that is just a joke and the subject is dropped, but a nagging continues in my mind.

The next geocache is dramatic and soon  grabs our attention when I ascend a magnificent oak tree thinking of England, Bucklers Hard, Trafalgar, and Victory.

The precision of weather forecasting is well demonstrated as rain starts at 1:30 precisely, just as predicted the evening before on North West Tonight

We find another couple of geocaches, have a chat with a farmer, and snap some unusual fungus. In the field of our last geocache the existence of black panthers in Cumbria is now undoubted. 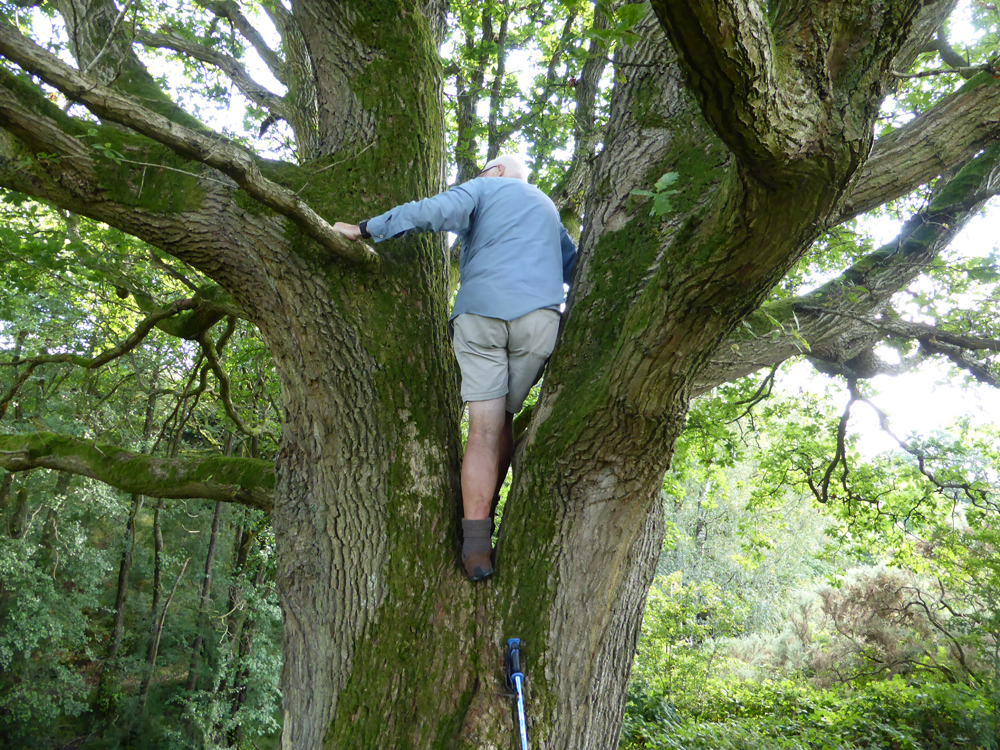 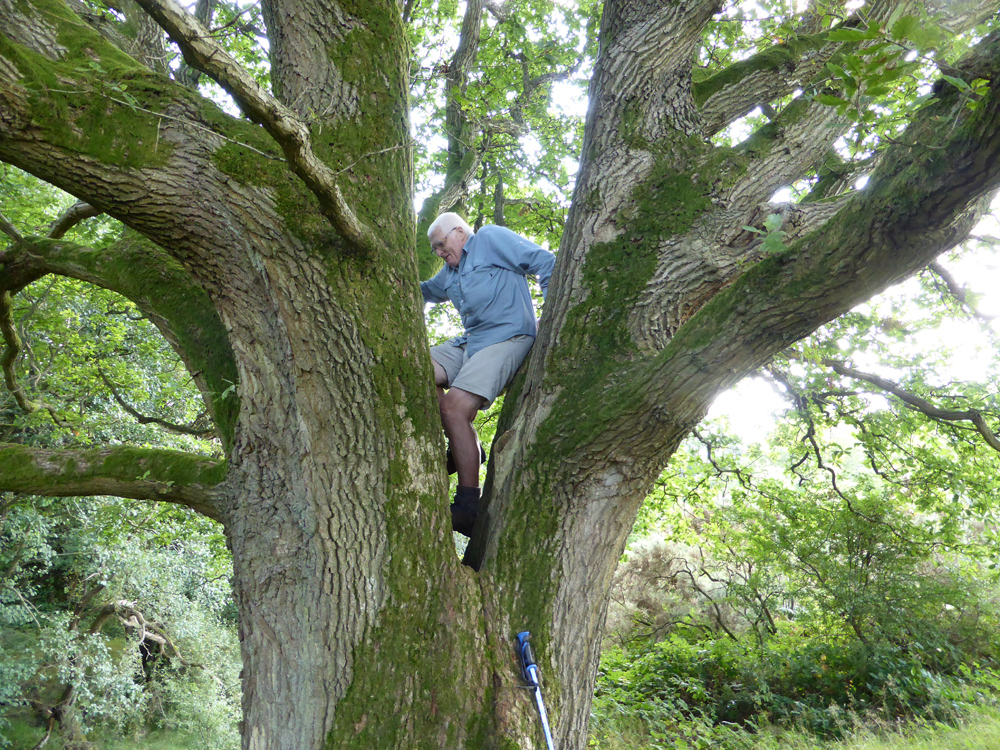 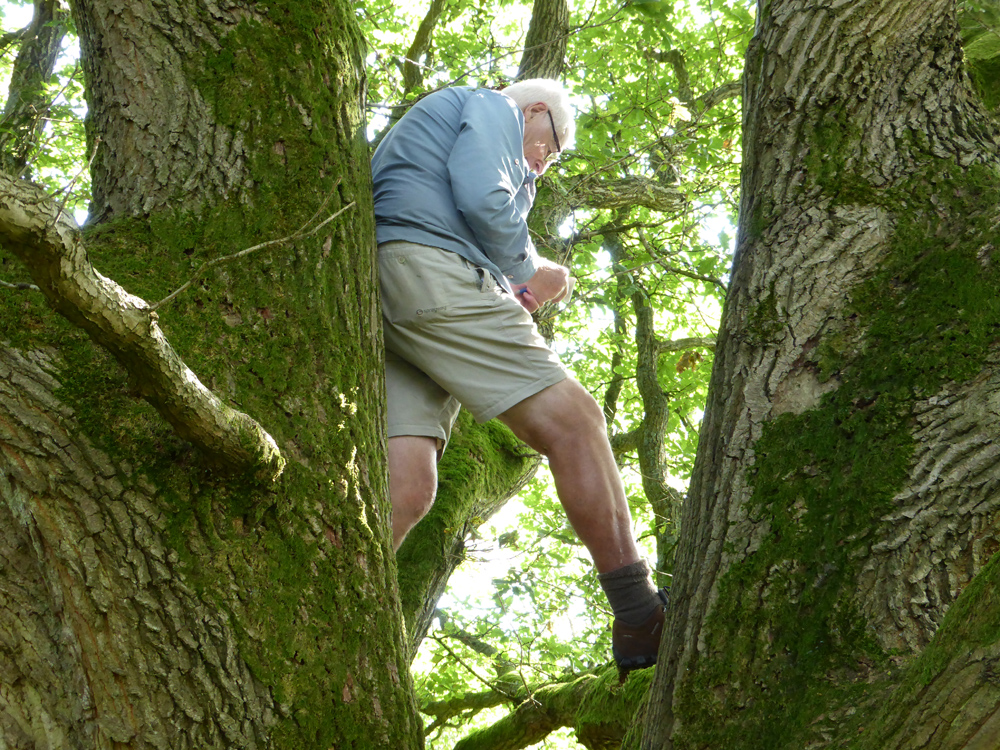 Hi Tarzan, Your Fungi is Macrolepiota procera, Field Parasol.
There are so many types of Fungi you would be looking at an App for ages to get the right species.

Damn, one of the few fungi I know and someone beats me to it. Conrad, buy your edible fungi from a shop!

Alan R. - You are correct. I downloaded one but it is not straightforward like birds which fall into fairly easily recognisable groups for amateurs. With flowers and other flora you really need scientific knowledge to understand the groups.

welshpaddler - You're one jump ahead of me (which isn't good for Tarzan), I don't know any of them except for our field mushroom.

You can't help feeling Hearts Of Oak could do with a little updating. I wonder what the Argies were singing when one of their Super Etandard aircraft released an Exocet missile causing HMS Sheffield not to sink but to "founder" (the RN always comes up with persuasive jargon). The men and women of Sheffield were no less heroes yet song-writers. or, more particularly, Redtop headline writers, are usually disinclined to hymn heroism of that sort. Making the "foundering" of Sheffield doubly hard to bear for her shipmates. Who talks of Sheffield these days? All we remember is "Gotcha" and the Belgrano.

Barrett Bonden, my earlier alter ago, knew how these things were done. Having tucked the colours of some defeated warship under his arm, with his sabre, he urged Jack to leave forthwith "because this barky is going straight to..." I think that last word may jave been Hell, but can't be sure. Heaven when you win, Hell when you don't.

Perhaps they were singing Land of the Free? That turns out to be the national anthem of Belize - the strange last line of the first verse goes:


"No longer shall we be hewers of wood."

Superb punchline Conrad. You had me going there for a moment.