Previous posts have praised the Dalesway, (Ilkley to Bowness-on-Windermere - 84 miles). This must contend for the best long distance path in the country. It follows attractive rivers, Yorkshire Dales limestone country, and higher moorland in a sequence of ever varying scenery, nearly always on good paths and tracks and almost no Tarmac

I reckon I have now walked maybe three quarters of the route in sections, and last Thursday with two Petes this time, I filled in another gap, following the River Rawthey from Milthrop, south of Sedbergh, four kilometres to the west to where the Rawthey joins the Lune. The Rawthey is surprisingly large to say it only sources a few kilometres north of Sedbergh, but it does drain the whole of the eastern side of the Howgills, and forges vigorously through interesting, contorted limestone outcrops in its riverbed. Just before joining the Lune the Rawthey is supplemented by the River Dee which the Dalesway has already encountered further upstream as river and footpath travel downstream in Dentdale. 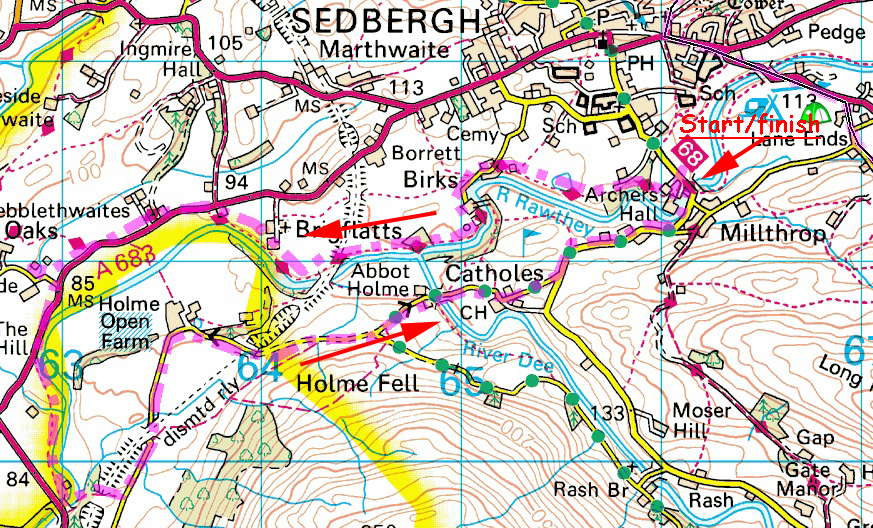 My last post enthused about Marilyn bagging associated with a true, highly rated hill walking day, but ticking the Ms list is not always like that.

Yesterday (Friday) I climbed another three of the 55 Lake District (Area 34) Marilyns leaving me a further 7 to climb for completion of that area.


The difference was that I drove between the three making for a more fragmented day without the enjoyment of a prolonged period at height. The new spoiler, after all the wetness is now fog or mist or whatever it is, and this persisted for most of the day, but the photos were better than I expected. Despite the different format it was an enjoyable and satisfying day, but I had had my fill of driving by the time I arrived back home.

I agree with you, the Dales Way is very nice. In fact I am on part of it right now. In my opinion it would be a fitting end to carry on walking and finish at Ravenglass.

"Surveying" forsooth. Where's the theodolite? Or is strapped to your forehead like the torch?

"They don't make 'em like that these days." But alas the poverty-stricken-cliché mill grinds on unhimdered.

"Purply" - preferred spelling with an e. But don't ask me why. In fact I may even be wrong.

Rawthey/Lune. If it's only 100 m away shouldn't we be able to see the junction? Again I question the apparent absence of the theodolite.

AlanR - You would have endless choices plotting that route. You may also consider extending to St. Bee's Head being a furthest west point.

RR - I concede on surveying.

Isn't one allowed a tongue in cheek (oops! Another cliché) cliché?

The river junction was off our route. I reckon if you had looked carefully through the hole in the wall in the previous photo you should have been able to see it. The photo with the caption is looking upstream in the opposite direction.

Hi Conrad. I have done both onward routes. Ravenglass and St Bees and I much prefer the Ravenglass option. Of course it is all personal preference.

Impressive steepness noted. The picture of the Low Fell summit appears to have been taken from an elevation unaffordable by your stature alone. Optical illusion? The blues of the cart metal echo the hues of the bridge. Rust and ruination everywhere, erosion, corrosion, collapse, and here arrives exploding spring.

Mike M - I think the cairn marks the highest point, so it must be an illusion. I am 6ft when I stand up straight.

The colours of decay are often complex and interesting. I have always been taken with rusting iron.

Best LDP is surely a personal thing, and maybe even weather dependent. Personally, mine would have to include some summits, so 'variants' to the official dumbed down cross-country routes are always likely to improve them in good weather. I was impressed with the Dales High Way from Saltaire to Appleby. The SWCP is also a fine route, and unlike a route like the Cumbria Way doesn't really need tweaking.

Phreerunner - I agree with you about the summits, and perhaps we should have different categories.

I too thought highly of the Dales Highway.

I have only done the part of the SWCP from Land's End to Barnstaple when I did my LEJOG, and that was magnificent. I have always thought the southern part may be a bit crowded, so it would probably be best to do it as early in the season as possible.

You might recall from my blog that we walked the SWCP route over a number of years at the Whit Bank Holiday (or in October if we missed that trip). May is a good time for daylight, flowers, and it wasn't crowded even during the Bank Holiday. Not so many people stray far from their cars, as you know...