Many circumstances have prevented me from walking for weeks. Any leisure time has been filled with my model making. The De Havilland Mosquito was finished and I am now embarked on a Mk1 Spitfire, but at last a decent weather forecast coincided with a blank calendar and the opportunity to leave WW2 and The Battle of Britain for a while.

On 19th August I walked the second part of The Lune Valley Ramble. Since then I bought an E-bike at vast expense with the idea of using it to combine car and bike for linear sections of such walks. I have never really had my heart in cycling, although its benefits were much enjoyed when I was using a mountain bike for Munro bagging. After a couple of outings locally on the bike it languished in the garage until I was honest enough with myself to ignore the cost. which kind of forces one to  pretend it was a good idea, and admit that I just didn't enjoy its company. Particularly on busy roads I was apprehensive and nervy. A couple of weeks before Christmas the bike was advertised and I was thankful to get back £100 less than I had paid for it.

Linear multi-day walks will now have to be tackled using circular routes only with half the distance contributing to the main objective. I have now realised that this is of no consequence: a walk is a walk  and a being in its own right and if half happens to be part of an objective that is a bonus.

The car was iced up. I started up and adopted the security risk of leaving it running with all the defrosting heater thing blasting away. The last time I did this I went back inside and left the keys there only to find when I arrived at my destination to meet BC for a day's walk I could not re-start the car without the keys and I was brought back home by Green Flag on the back of their recovery vehicle hoping that the neighbours would not be looking. Great care was taken today to avoid a repeat.

I was able to use a car park opposite the church in upper Aughton. A steep road descent into the lower part of the village needed care with patches of non-visible black Ice here and there. There is a cottage and outbuildings down by the river where I finished last time and I looked with mixed thoughts at the open ended barn I had earmarked as a good place to conceal a bike when I next resumed, and here I was now with the revised plan.

Although there was a heavy frost fields were still gloopy and hard going. It took perhaps quarter of a mile to get back to the river - it really is a big beast at this stage and the views upstream exemplified the  now spectacular scale.

I was soon into wooded sections with steep rough muddy mini switchback paths,  often intimidatingly above the river and with treacherous tree routes and numerous crossings of deeply gouged tributary streams - all generally arduous going. Hardly a pleasant "Lune Valley Ramble." This continued with odd sections of muddy fields. At one point there is a little cottage called The Snab. I had of course to Google this back home but although it is mentioned by other walkers  derivation is not mentioned. Googling "snab" alone came up with:

I don't think I'll be signing up for that anytime soon even though it may be more palatable using "real life concepts."

My "furthest north" was the familiar Loyn Bridge passed on our Wainwright's Way with BC and on many other occasions but not from this direction. I italicised being reminded of what I thought was a fantastic bargain - a grand first edition of "Nearest the Pole" by Peary (1907) found in a secondhand bookshop for thirty shillings. Gloating on this coup I examined further back at home -  looking at the list of illustrations I noted: "Frontispiece, colour, Peary planting the US flag at the "the furthest north." Excited I realised that this must have been a very rare colour photo at the time thus potentially increasing the value of my find - the frontispiece had been removed.

The return by roads and paths was enjoyable climbing back to  higher ground with extensive views of the Lune valley. I think I will need two more of these circular trips to finish off this project; return paths are not so evident but I have not yet planned properly. 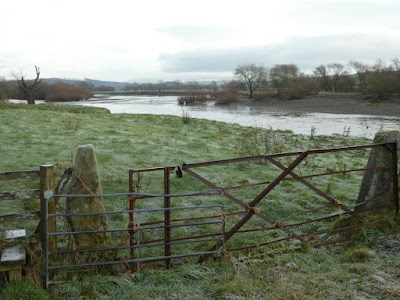 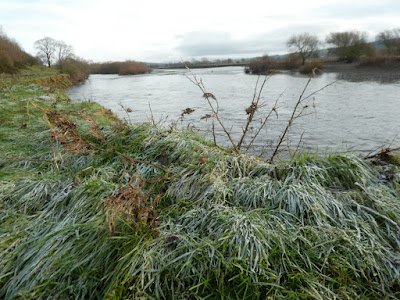 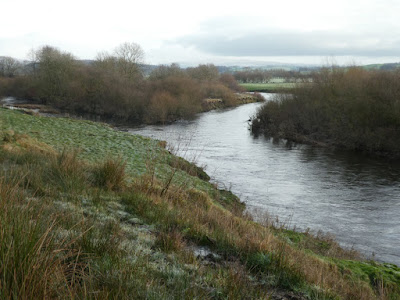 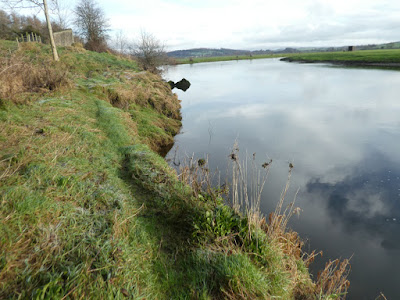 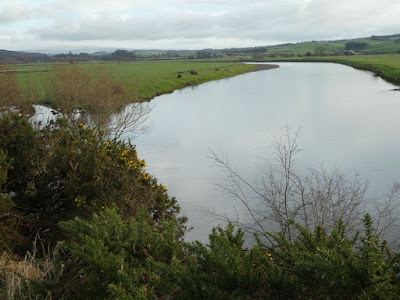 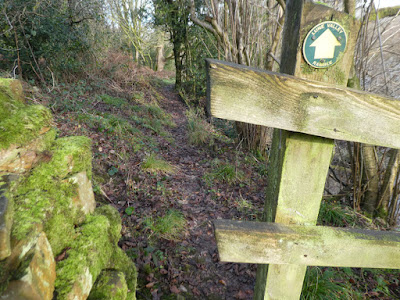 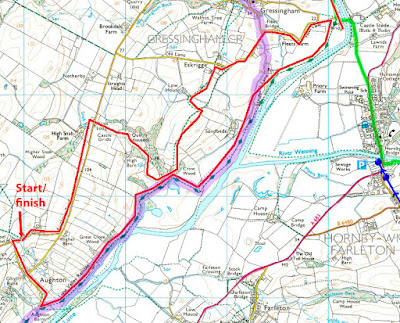 FOR DAVE: "THIS IS THE WAY" formerly "THE OSS ROAD"

Wishing all an enjoyable Christmas and a better New Year. 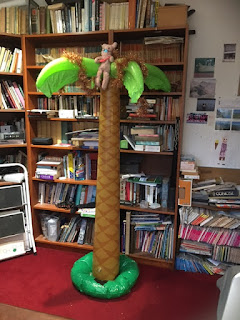 Our alternative Christmas tree. Pink Teddy on the top goes back two generations - I think he could do with some attention from The Repair Shop The conventional tree is in the other room.
I will be apart from daughter and granddaughter this time, just me and son W. 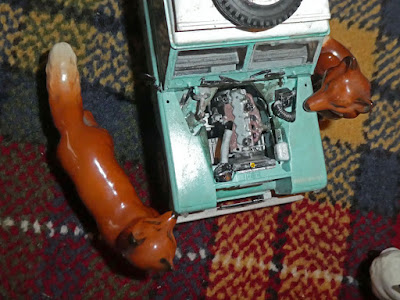 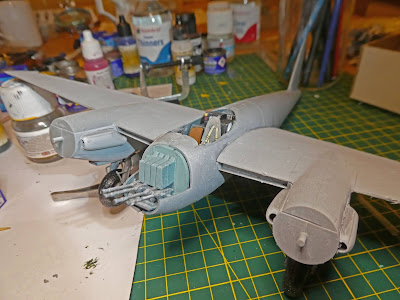 Various circumstances have conspired recently against forays into the outdoors.

Meanwhile I have had a revolution on my hands.

I have a collection of Beswick dogs on my mantelpiece and granddaughter Katie has always enjoyed seeing them. Katie presented me with Bonzo the bulldog on my birthday, a powerful guy with a strong will. He immediately took over as leader of the pack and appointed Quacker the duck as his second-in-command.Yesterday I learned there had been an attempted overthrow by Floppy the springer. I think it happened in the night, but fortunately Bonzo and Quacker were able to  quell the rebellion but only with the help of their special agents, The Red Foxes.

I await the outcome - it may be that Floppy goes on trial but I hope he doesn't have a mysterious and unexplained fall off the mantlepiece.