Cycling  presents new approaches to photography. I am only a snapshot taker, but I do like to try and compose some interest.
Instead of a pair of spindly walking poles, or a rucksack, the bike can be used as a foreground prop, that is, if one can overcome laziness by dismounting and parking the bike prior to taking a pic. Remaining on the bike can give you some extra height, and the picture here of Aysgarth Falls was taken sitting on the bike with elbows solidly placed on top of a wall. I anticipate other dodges will come to light as I continue with cycling. My heart is still wedded to walking, and if the long drawn out job of sorting my knees is successful I would hope to return to that activity, but in the meantime cycling is not a bad substitute.
These pictures were taken yesterday on a ride from Hawes to Bainbridge, Askrigg and Aysgarth, and back again. The outward route was on the south side of Wensleydale, and the return on the north side, both on minor roads, splendidly elevated above the valley giving none stop nostalgic views all the way - back in the 60s I spent a lot of time with friends fishing the river Ure, and hobnobbing with locals over many pints of beer, in unspoilt (at that time) country inns in this dale.

A 21 mile cycle ride from home today took me on a number of tiny, grass-in-the-middle roads that I have never traversed before despite living here for 12 years, and using many minor bye-ways for walking during the foot and mouth outbreak. A couple of these with only modest elevation gave me inspiring distant views of the Lake District. 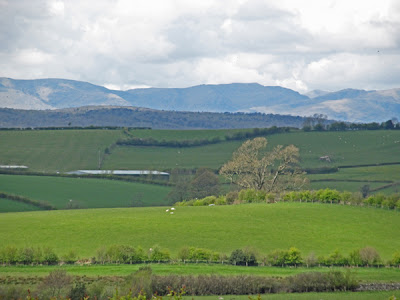 I have a sort of love hate thing with farmers, and I have often noticed their dry and economic communication. I stopped on an old hump back bridge to look down into the pretty, bubbling and tree lined River Bela, then looked up to see I was being observed by a farmer just emerging from his domain across the road,
“A chap drowned in there yesterday” was his opening announcement.

He went on to explain about a not so elderly local known to him, who had been fishing and had been found drowned. I suppose there will be more detail of this in the Westmorland Gazette next Friday.
I happened to mention my forthcoming knee operation (now scheduled for 4th May), and he had to tell me about his hip replacement which he cheerfully informed me keeps popping out. More chat raised the subject of otters which he seemed to have something against, but he did not elaborate,
“...they’re alright as long as they stay in the river”.
After this anti wildlife stance he then eulogised about recently seeing a dipper on the river, and enthusiastically told me about the abundance of kingfishers.
I left Mr. Farmer going off for his lunch, and I cycled on feeling a little confused, and welcomed a stop at the Farleton View Tea Shop for a pot of tea and a chocolate brownie.
Posted by Sir Hugh at Sunday, April 22, 2012 No comments:

One of my commenters has been having problems with Blogger not recognising his id, and rendering him unable to comment.

I would be grateful if anybody else out there  having that problem would send me an email conrob@me.com

Yesterday I pedalled 36 miles from Wigton round the Solway coast, a route I have cycled before at the same season, the attraction being five miles with abundant bushes of gorse in full vibrant yellow bloom on both sides of the road.
At a point where there was a choice to take the 18 mile option weather threatened. I was tempted, but it had been a long drive to get there and I would have missed the gorse so I battled on into a swirling hailstorm. The additional speed compared with walking makes hail lethal and my face was stinging to a point where I thought I would have to stop, but there was no place to shelter so I pressed on, and then the sun returned and I was able to enjoy the yellow splendour which has the added benefit of a fragrant and satisfying perfume.

On Thursday I took the Claude Butler Voyager on her/his/its maiden voyage. I put the bike on the train at Arnside, there was just one coach - only two cycles are permitted. There was already one on board. My journey was one stop, across Arnside Viaduct to Grange-over-Sands - six minutes and £2.50 (I think the bike went free).
Cycling back round the bay the sun was shining.The 28 inch wheels promote that sense of superiority gained riding in a 4 x 4, and the Voyager rolled along so much more freely than the old mountain bike which set me thinking about its recent sale.
I had Googled the Ebay purchaser, revealing him as a “systems developer” at Lancaster University. Some of his research had related to emotions transmitted by the skin with connotations for marketing. This sounded interesting. Various scenarios flitted through my mind: a car salesman having a gismo telling him your true feelings about the car being viewed when you touched it, or when you shook hands with him, and other potential applications too intimate to articulate here. I tried to promote conversation when I delivered the bike, but I was cut short, and the guy just wanted to be off somewhere else. 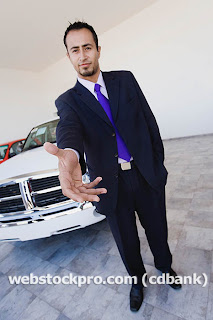 I suffered some nostalgia parting with the Terrago. It had been a part of my Munro endeavours over the last few years. One troublesome memory of derring-do occurred on my ascent of An Sgarsoch and Carn an Fhidhleir, remote Munros southwest of Linn of Dee. I met two guys on the first summit, and they beat me to the second by taking a shorter route. I was nettled.
Back at the bikes I saw the young duo some distance down the track. I was determined to restore pride by beating them back to Linn of Dee, a ride of about 10km.  I was inspired, and at one with the bike, born along by the gods. I passed the junior-hards at great speed in a whirlwind of rattling stones and dust, heightening my senses yet again, and I pressed on.  Three kilometres out from Linn of Dee I was abruptly stopped by a loud cracking sound. My rear wheel had submitted, but with clamorous protest, to a large stone, and it now looked like something out of a Salvador Dali painting - all bent and droopy.
The two Munro usurpers arrived, and were able to interpret the scene instantly. There was no conversation between us, they just passed by. I squirmed as I imagined their conversation, and pushed on with my wounded mount back to the car, a sadder and hopefully wiser egoist.
Posted by Sir Hugh at Monday, April 09, 2012 2 comments:

Retirement (not on a budget)

The cow pics in my last post were taken at Low Sizergh Barn Farm Shop not far from my abode. At LSBFS well-to-do, elderly middle class frequenters, whose main pleasure in life is reviewing overpriced quality shops and eatng places, can satiate their hunger for retail therapy by paying four times as much for chicken breast, or cauliflower than they would at Tesco.
This is the ultimate place for people-watching within the narrow band described above. As you mingle you are close enough to catch snatches of conversation between long married, expensively dressed couples:
“shall we have the smoked salmon (from an obscure smokehouse in Inverkirksomethingorother run by the fourth generation of the McMurdysomethingorother clan), or the sea bass? (line caught off the coast of Greenland)
Even the ladies behind the counter seem as though they might have “come out” thirty years ago, and they are either so well groomed, or so well trained that their considered pleasantries can help assuage any guilty conscience one may have for having paid £4.50 for a lettuce that would have cost 70p at Tesco, where the sixteen year old checkout girl greets you with the automated:
“do you want help with your packing?”
Upstairs there is  a posh café with a gallery looking down into the cow byres, suitably screened by glass to avoid any undesirable olfactory connection with agriculture. Here the cows are treated like guests at the Lord Mayors Banquet. The milking parlour is as clean as Ferrari’s production line, and the animals themselves have an aristocratic demeanour.  In summer the cows come in for milking. What a gift for our doting well-to-doers who bring their grandchildren to observe, and to be educated.


In winter the cows are housed in this, their version of a country house, on a free range basis with plenty of straw and fodder, and room to amble about and hobnob as though they were in the bar of a gentleman’s club (albeit, of course that they are ladies). There is a final piece de resistance - the cows have a huge water powered brush like one part of a car wash mounted on a pole and oscillating at bum height, and they queue up in turns to wash their bums - fascinating!
Posted by Sir Hugh at Monday, April 02, 2012 2 comments: