After the calamitous results on Friday I felt physically sick and had little motivation to do anything.

Following reflection over the next twenty four hours and a call from BC now returned from France I realised life must go on, and so we found ourselves setting off on Saturday for the next-to-last section of our witches walk.

It wasn't long before we came across this sign -  a reminder of the folly that has been perpetrated:

Shortly after setting off we became aware of a party of fifteen or so following us and because we were stopping to take photos and survey rock climbing crags across the valley with our binoculars these people caught us up. They were a mixed group doing a walk for charity, but as I was taking this in I realised I was looking at individuals and saying to myself "I wonder which way he (or she) voted". So, overnight, it was forcibly brought home to me that we are a nation divided and given to suspicion and mistrust of our fellow countrymen. OK, the divide was there before under the surface, but it has arisen largely from the impositions of austerity making many lives miserable and difficult, and in the end something had to give.
The majority of this ten mile walk was on the unsurfaced old road of Salter Fell from Slaidburn to connect through to the Lune valley, and the finish of the Witches Walk at Lancaster. Although there is no problem with navigation once halfway across this old Roman road you are just about as isolated as is possible anywhere in England. 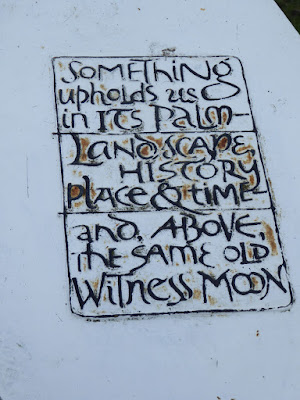 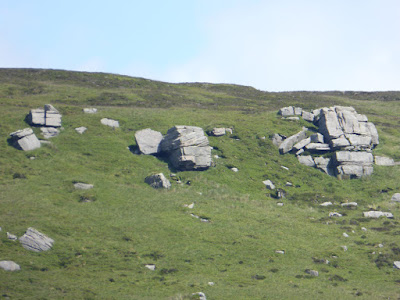 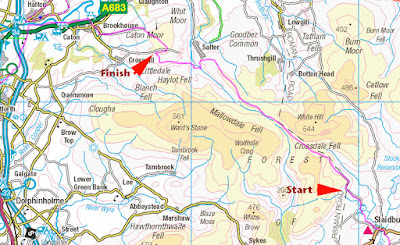 SINCE POSTING THIS I HAVE REPLIED TO RR IN A COMMENT AND WOULD URGE EVERYBODY TO READ IT - BETTER STILL I WILL COPY AND PASTE IT HERE:


RR - Ok. Here are a few. Much of the red tape complained about is for everybody's good: protection from fraud, bad banking practice, human rights, important health and safety, cleaner rivers etc., etc., but nobody seems to mention this, preferring to concentrate on bendy cucumbers. Without the protection from Europe on these points ruthless Tory type governments would be allowed to rule without hindrance. We would only have the House of Lords to fall back on, and that may well be soon abolished.

OK the Union has its faults AND SO HAS EVERY OTHER ORGANISATION IN THE WORLD, but it has existed and done more good than harm over the longest period of peace Europe has ever known. It has introduced beneficial legislation, (as well as some fatuous stuff I know, but how much does that really matter?) and will continue to do so with good intentions. If we go independent the emphasis will be on money grabbing, bigger fortunes for the rich and general cynicism with no thoughts for humanity and environmental issues, and we will most likely become one of the world's most hated countries. All that is fairly certain, and enough to underline a decision to remain rather than embark on a risky strategy which will almost certainly create economic difficulty for the next few years at the best, and no guarantee whatsoever that we would improve on that in the fiercely competitive international trading climate.
There are many other points but in the interests of replying to you as suggested asap in view the time left there you are.
*************************************************************************************************************************


What a difference between walking on a popular well established LDP (The Dalesway) and other nondescript public footpaths marked on the map.

Today, in order to devise a circular route to avoid a there and back one, I set off on minor paths so I could leave my section of Dalesway to enjoy as a finale. All to the north of my starting point on the A684 was off -Dalesway - see the map below. To be fair those paths were  just evident on the ground and they were way-marked, but they had no apparent purposeful direction traversing fairly boring livestock fields, although the surroundings of the southern edge of the Howgills to the north and the more distant northern edge of the Bowland hills to the south provided a splendid background.

Towards the end of that section I was confronted by an immovable metal gate, impossible to lift and covered in barbed wire along the top, and I had to retreat back on to the main road. I have reported this to Cumbria County Council.

Once back on the Dalesway I was following the river Rawthey on a good path mostly high above the river but shrouded by mature trees, so I was only getting tantalising glimpses of the river which, far below was tumbling, gushing and surging over its limestone bed with much vigour appealing to an innate connection with this staple ingredient allowing us to exist on this planet.

Several dog walkers were encountered and a couple of serious backpackers, again carrying far too much weight. It was all pure pleasure and this short six mile section was over too soon. 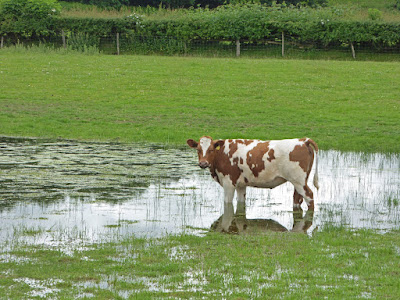 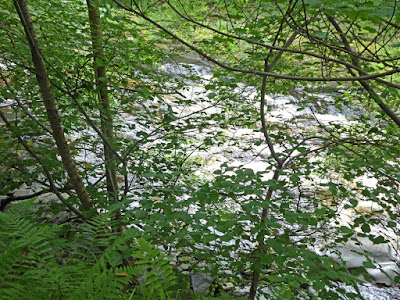 After making some statement indicating difficulty to overcome it is followed up by the phrase, "no pressure then?"

I DO NOT NORMALLY DO POLITICS HERE. THIS REFERENDUM IS BIGGER THAN POLITICS AND THE RISK OF OPTING OUT IS FAR TOO SERIOUS, AND FOR MANY OTHER REASONS,
I AM VOTING IN

Dalesway - Sedbergh to north of Dent

Things are piling up.

There are two more sections of the Lancashire Witches Walk remaining, but BC is away in France so I must await his return.

I still have two unclimbed English Marilyns to do.

There are some sections left of my Dalesway campaign: filling in previously unwalked sections.

I have a stack of books to read.

All this and I am off backpacking again on 6th July - I have bought my rail ticket to Penzance.

Anyway I did another short section of Dalesway yesterday.

My last section finished where the Dalesway coincides with the Dales High Way which I have previously walked, and the overlap continues north beyond Dent, to Barth Bridge so that was my target today starting from the north this time, near Sedbergh.

This excellent LDP continued to uphold my high rating, following ancient tracks and bye-ways. One constantly has that connection with the medieval picturing people travelling with donkeys and horses, and even on a short section of Tarmac I was imagining this as it would have been, unsurfaced as a rutted track as I was passing farmhouses and buildings that haven't changed since the 1600s and earlier.

This kind of walking is ever changing with much to see and with the feel of following a purposeful route established over the centuries, compared with walks that pass through crop fields outside any national parks or AONBs and only connect you with modern day intensive farming and ankle twisting field edges on pseudo paths that have no pedigree.

On such a popular route I met various others approaching from the south, mainly having started that morning from Dent, so once those morning starters passed things quietened down.

There were two guys in their late twenties from Leeds backpacking the whole route - enormous rucksacks towering above their heads, tin mugs dangling, straps flailing, and wearing enough clothing for winter in Scotland whilst I was wearing only shorts and a shirt and even so perspiring profusely.

A party of young girls from Boston USA provided pleasant chat - they were doing the through route, but with baggage transfer.

A disillusioned fly fisherman appeared moaning about the lack of trout. He was wearing shirt, sweater and a stifling bulky Barbour jacket, again in contrast to my own hot sunshine attire.

Nearing my outward destination a mixed party of retirees approached, "does the Dales High Way branch off from further on up here?" They appeared to have no map or other directions and one woman was working up to assassinating the male leader when I told them they would have to retrace their steps a kilometre to Barth Bridge. I tried to console her by suggesting that an extra kilometre on such a delightful path was a bonus, but she still kept ranting at her leader, so I tuned up and sang a bit of Look on the Bright Side of Life as I followed on behind.

Meeting so many people had proved entertaining and my return by the same route rounded off a very pleasant little outing. 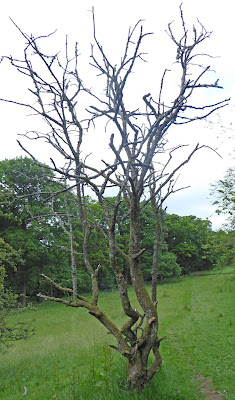 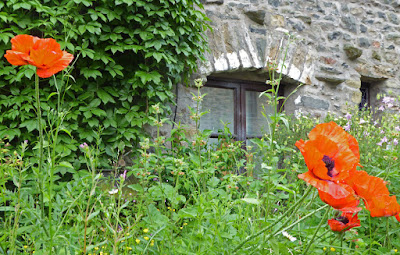 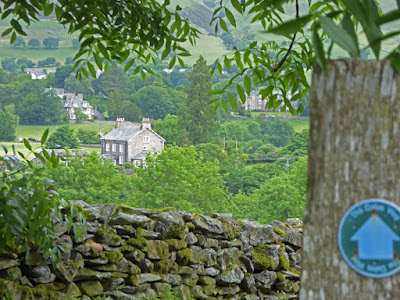 A continuation to fill in sections of this LDP I have not previously walked.

Doing these alone I have to devise circular walks, or in this case returning mainly by the same route. That means I can only cover half the distance of each walk actually on the Dalesway. 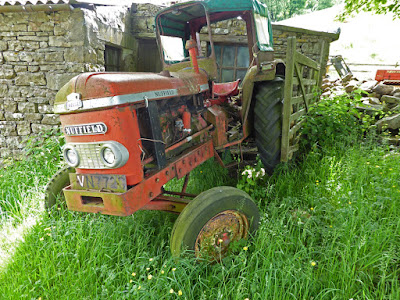 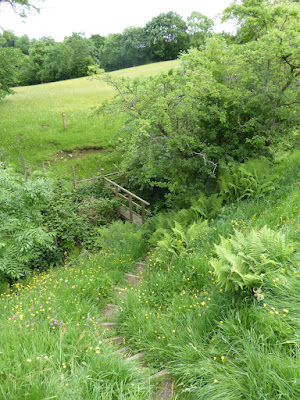