I have now had a reply from the Ordnance Survey about the object attached to one of their trig points (see my posts 57 & 58).

Thank you for your email

I have had confirmation that this is an orienteering punch.
However this 'addition' is nothing to do with Ordnance Survey and it is
likely we would have to remove it should we (or any other surveyor) wish
to set equipment on the Trig Pillar.
Thank you for informing us however there is no further information we
can give.

Lesley Flood
Customer Service Adviser
Customer Service Centre, Ordnance Survey
Room C454, Romsey Road, SOUTHAMPTON, United Kingdom, SO16 4GU
Phone: +44 (0) 8456 05 05 05
Fax: +44 (0) 23 8079 2615
I wouldn't want to carry many of those things around in my rucksack if I was an orienteering marshall.
*************************************
GEOCACHING
This  pursuit is becoming  addictive. You may notice the  logo on my blog which  automatically records the number of caches I have visited  after I have recorded them on the Geocache site. So far I have found sixteen, one of which required two visits due to my ignorance of the affairs of the band called Oasis and something to do with "Wunderwall", knowledge of which was required to interpret the clue about the location. The solution was gleaned from my daughter Jill who was appalled and amused at this gap in my education, and I was forced to listen to the song! Looking at profiles of other geocachers I see some who have found several thousand caches!

Here are some Geocache pics: 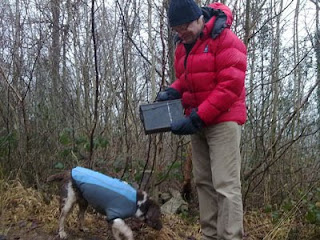 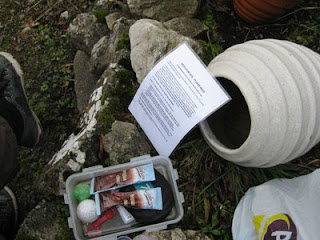 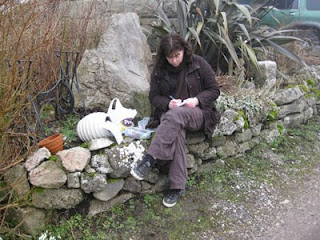 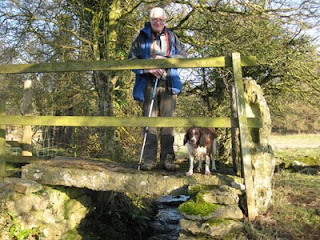 ***********************************
PROPER WALKING
In the last couple of days I  printed off sheets from Memory Map with the route marked  for my proposed walk from Lowestoft to St Bees Head which I intend to do after walking in France during May and June. The print off runs to fifty three pages of A4, and this gives some enlargement of the 1:50000 map. I will probably post half of these ahead to save weight, although they are not too heavy, and certainly much better than carrying all the maps.
Posted by Sir Hugh at Sunday, February 21, 2010 2 comments:

I went off Geocaching with my daughter this afternoon. I am sure everybody will be amused to follow our video on YouTube:  http://www.youtube.com/watch?v=BdhhGmDi7Ek
Posted by Sir Hugh at Saturday, February 13, 2010 2 comments:

A very cold clear blue sky day. I was accompanied by Pete and Jake the dog.
1. Nettle Hill (Crosby Garrett Fell) 382m - NY 716 078
The ascent was from the road north of Newbiggin-on-Lune - NY 693 065. A very agreeable walk over cropped turf and approximately a six kilometer round trip. Great views of the northern Pennines with lots of snow on Cross Fell. 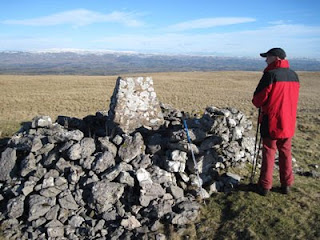 Above and below:  Nettle Hill  and distant Cross Fell with snow 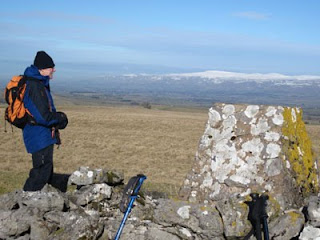 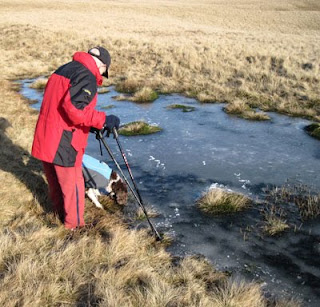 This trig was off the public footpath which leads to Soulby and involved negotiating two barbed wire fences - all a bit naughty, but there was no nearby farm where we could have asked permission. 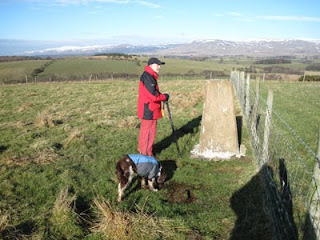 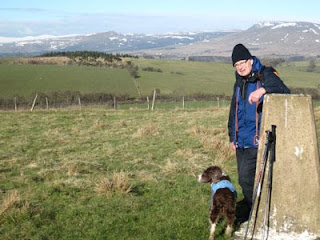 Ascent was from Brow Foot up a track leading to a house. The map shows an interconnecting public footpath between this house and another to the south east, but a gate was barring the way and there was no indication of right of way. A man was working there on a felled tree and we spoke to him. At first he was very prickly, but after a certain amount of diplomacy, and no mention of our rights to the public footpath by us, he came round and then seemed to want to talk for the rest of the afternoon. He advised us to call at the adjacent house to ask for permission to go to the trig which we did.
On approaching the trig in the corner of a field we noticed that muck spreading activity had been carried out close to the trig, then we realised we could hear the tractor coming back with another full load. Pete urged me to hurry and get my photos before the tractor returned with the threat of us being covered with you know what. 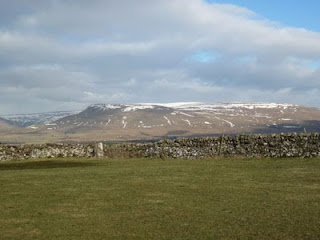 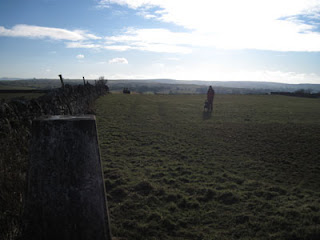 You can just see the tractor approaching down the side of the wall and a worried Pete hoping I am going to complete the mission in time.
Posted by Sir Hugh at Friday, February 12, 2010 No comments:

I emailed  British Orienteering about the trig point object - here is the reply:

I have been in touch with the local orienteering club and regional development officer. Neither have any knowledge as to why an orienteering punch is attached to the trig point. One suggestion is that it may be linked to fell races (3 peaks?)or some LDWA challenge.
Regards

I have now sent a query to Ordnance Survey. I will post the result as and when I receive a reply. The last time I tried to get some information from the OS I did not get a reply.

I've just got onto Geocaching, but more of that later.
Posted by Sir Hugh at Tuesday, February 09, 2010 No comments: