On Sunday I breakfasted around 7:30 am with no sign of snow. By 10:30 there was a covering of three inches.

It is now Tuesday and more snow has fallen on and off and travel has been difficult, but with my daughter Jill we have managed so far. When Jill arrived at Arnside on Sunday afternoon she could not get up the hill to my house and had to park here car several hundred yards away. We then made several trips from car to house using the wheelybin to ferry all her Christmas impedimenta. We plan one more shopping trip tomorrow and there is till doubt depending on what happens during the night.

The following pictures, which were all taken within half a mile of my house tell the story. 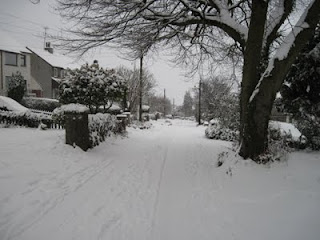 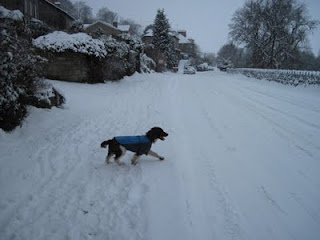 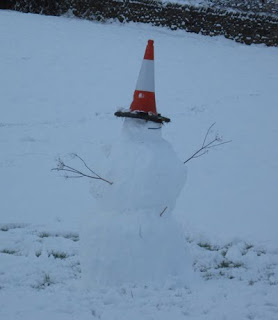 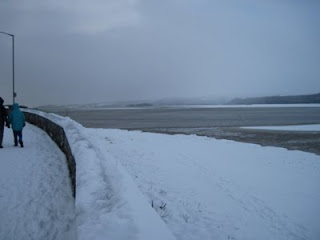 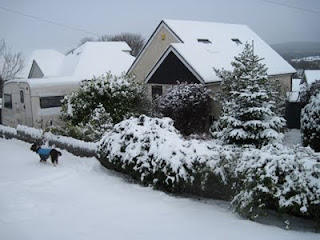 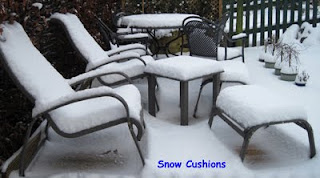 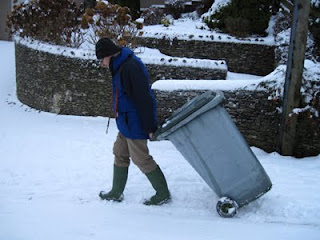 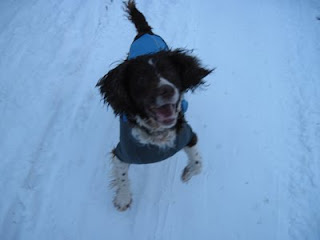 I replied to Crow’s comment by email, but thought some details may be of interest elsewhere

I suppose I was influenced by my elder rock climbing brother when I was about thirteen. My mother took me and my younger brother on youth hostel cycling trips around the same time, and I joined the Boy Scouts leading to camping and meeting others interested in rock climbing. Rock climbing remained as my main interest until I was married in 1970 then family matters took over. I returned to rock climbing in my fifties. My wife died from Motor Neurone disease in 1997. I was still climbing and continued to do so for another five years or so with a good friend with whom I shared other interests. Tony died from cancer about five years ago. I did not want to climb with anyone else after that and returned to more walking mainly on my own, resulting in most of the achievements listed in my profile.

Crow asked “what do you take with you?”

On a day walk I take my mobile, map, compass, whistle, GPS and camera. A spare item of warm clothing, gloves in winter, and if it is a walk of more than six miles or so probably a couple of energy bars and a flask of coffee. 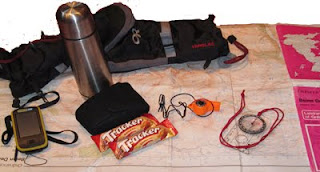 On Grande Randonnée walks I have usually stayed in mountain refuges and gîtes d’étape and therefore not carried camping equipment. See below the kit list from my GR5 trip.

My Lands End to John o’Groats walk included carrying a lightweight tent, inflateable mat and sleeping bag, and cooking equipment. That rucksack weighs about eighteen pounds, not including water and food which often takes the weight to 20 pounds plus.

Next summer I plan to walk in France traversing The Languedoc and The Cevennes and because of the depreciated exchange rate between the Euro and the Pound I will take the tent and camp wherever possible.

The three trigs visited are situated to the north and south of the A66 between Penrith and Scotch Corner. 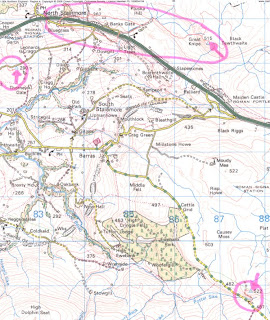 At last some decent weather but still a bit broody. Great Knipe is north of A66 on a dual carrigeway and I was unsure where to set off from. In retropsect the B road to Banks Gate would have been better, or the transport cafe car park. As it was I took a shortcut across some fields from North Stainmore to pick up the lane from Banks Gate, and I was accosted by the farmer. Of course I was very humble, and eventually he became friendly and gave me good instructions for the ascent. There was an unpleasant section of reedy marsh and Jake the dog was not happy; he seems to be having some breathing problems when the going is strenuous, but he is thirteen years old.

The views of the A66 and the transport cafe below were impressive. I was able to get back to the south side of the A66 on my return at Banks Gate and then back to the road on a farm track. 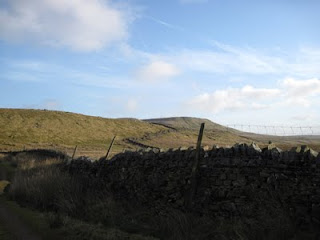 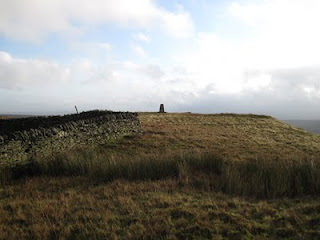 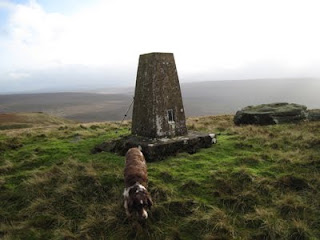 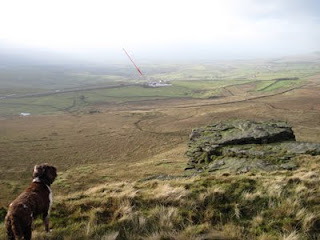 Arrow shows transport cafe on A66

The second trig south of North Stainmore was visible from the road and only about fifty yards away, nevertheless I had to climb walls twice to get there and back.

The main interest was the plaque stating that this trig point was the final one used in the 1962 triangulation epic. 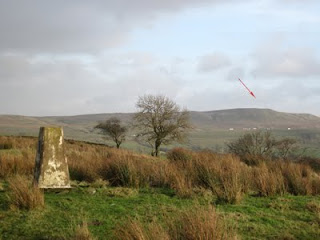 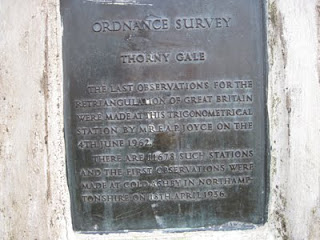 By the time I got to the third trig the light was going and although very close to the road it is a wild and isolated spot - quite atmospheric. 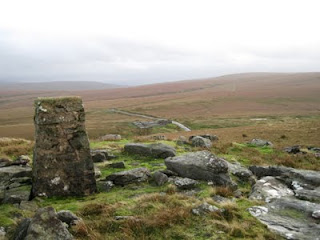 Here it is - Jake's slightly in advance Christmas present. 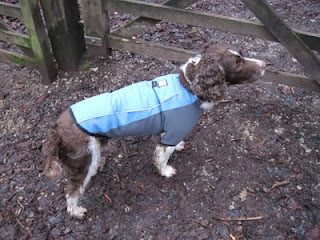 It has been suggested that I describe my meaning of a “quality walk”. Well I see no alternative but to provide lists of desirable and undesirable features. The parameters below would apply to a day walk – long distance multi-day walks may be another subject.

Varied scenery
Circular or linear route
Distant views and cameo views
A good section of ridge walking and maybe some rock scrambling
Tarns, lochs, lakes, streams, burns and rivers
Some sort of shelter around the midpoint, if only the ubiquitous dry stone construction found on many summits, or perhaps a café
A feeling of remoteness with only the odd chance of meeting others
New territory not previously explored

Good weather is welcome, but I have no objection to bad weather when I have appropriate apparel. I enjoy the challenge of trekking across wild pathless terrain.

I relish winter mornings with cloudless deep blue sky and a touch of frost and total stillness - in the appropriate environment there is mostly uncanny silence, but any sound, hopefully of nature, seems to carry and ring more brightly then usual, even one’s footsteps produce a kind of echo.

Offhand I can’t think of a walk that satisfies all the criteria and if I could I would probably want to keep it secret.

One section of my Lands End/John o’Groats walk that was especially enjoyable considering that it was not in classic mountain country was the long ridge walk from Pandy to Hay-on-Wye. I had not been on that ridge before and it really took me by surprise.
Posted by Sir Hugh at Tuesday, December 08, 2009 7 comments: