We alight  at Kendal Auction Mart, a new, purpose built, multi function Mecca for Cumbrian livestock farmers, and addicted household auction devotees. This is our Thursday post walk venue. Our target, Café Ambio, they have a concession within.

Entering through automatic doors, we see fittings, floor coverings and interior design,  smart and modern, hinting at the head office of, perhaps a posh software company, but is this fit for purpose?

Our visits rarely coincide with livestock auction days,  the café is usually quiet. Today we can’t help noticing we are following a trail of mixed sawdust, cow dung and sheep droppings on the clinical floor which increases as we coincide with the corridor from the livestock auction ring to the café, and furthermore, an overpowering bucolic stench prevails - fortunately that seems to dissipate as we enter the café.

The ambiance is cacophonous with farmers badinage and gossip. We see a range of ages, but mostly with gnarly Cumbrian weather-beaten faces, wearing flat hats, woefully worn and ingrained tweed three piece suits, or layers of moth eaten jumpers or cardigans, all wearing muck shedding wellies, and most carrying home made knobbly sticks for prodding their livestock into spriteliness to impress prospective buyers in the ring, which all tends to belie some of the expensive transport parked outside. This gathering  looks like it has been transported from the stone flagged floors of a Cumbrian pub shepherds' meet, and appears incongruous here where well intentioned designers have failed to marry the Cumbrian farmyard and its attendant livestock with modern architecture.

Our walk was uphill and down dale from Crosthwaite where we parked, (with permission), at the expensive Punch Bowl, (sample starter - seared Loch Fyne scallops, white chocolate and truffle risotto £9.95). 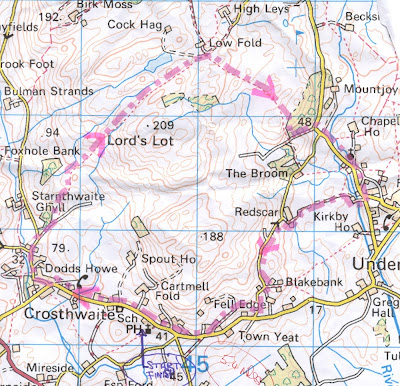 The Unicorn in the Garden

Anybody watching me ponderously too-ing and fro-ing across the remote little bridge and poking amongst the trees on the bank may have concluded I was deranged and in need of help. I may have suffered the same fate as the man's wife in Thurber's story.

Twenty minutes passed trying to find the Geocache - the clue: “under a mossy tree stump”. GPS told me I was on the spot, but I failed. Geocaching website said it was last found in August so I assume it is still there.

My daughter, High Horse,  and others, often try to persuade me to collect Geocaches or view places of interest on my walks. Satisfactory walking for me means covering a comfortable distance to arrive at a targeted destination to leave time for more comfort at the end of the day.

“You should visit the doll museum at Ugglethorlby”.  The museum, or the Geocache, may be three miles there and back off the route, plus a modest hour to look round. A seven hour day becomes nine.

Yesterday I strategically planned a short walk to allow time to bag the only Geocache close to Brunt Knott, a local, previously unclimbed, trig-pointed peak that has long been on my to do list, and also for fellow blogger Mark,  http://beatingthebounds.wordpress.com . Some time ago, we exchanged comments about not having climbed Brunt Knott, and I had fantasised about the unlikely coincidence of us meeting on the top having independently decided to tick off this pimple on the same date.

As I approached the summit I was perhaps deranged even before the Geocache fiasco. I was convinced Mark would jump out from behind the trig pillar, but such are the dreams of a blogger short of material.

Elvis and The Beatles were rubbish!

In the 60s musicians’ unions allowed American jazz performers to visit the UK. In Bradford we saw most of the celebrated American jazz bands and performers at St George’s Hall, and we had the Students’ Club in an atmospheric cellar where individuals from the American groups came afterwards playing with local jazz guys into the early hours.
We mixed those enthusiasms with rock climbing at weekends, and for some, earnest and voracious discovering of “good books”. We all had collections of jazz LPs, which were lent and swopped. Jack, not one of the readers, was a wool-sorter riving apart sheeps’ fleeces by hand and his fingers were like forty grit sandpaper - that combined with a lack of any feeling for the delicate vinyl was a death sentence by scratching, to any treasured LP lent to him -  that was if you were “lucky” enough to have it returned.

My walking friend Pete was part of all this. Recently we reminisced and Pete lamented the non-return of a treasured LP.

I  bought the remastered cd version of Pete’s favourite: Sonny Side Up, featuring Sonny Rollins, Dizzy Gillespie, Sonny Stitt, and Ray Bryant.  We now wallow in nostalgia playing this driving to and from our walks.

There are fiercely competitive solos between Rollins and Stitt and in the fourteen minute track, After Hours, a long piano solo from Ray Bryant invoking visions of an empty jazz cellar and an old guy sweeping up as the lone pianist and bass player indulge in a haunting exploration.

Sonny Side Up, along with, Kind of Blue (Miles Davis), are two of the all time greats of jazz recordings. 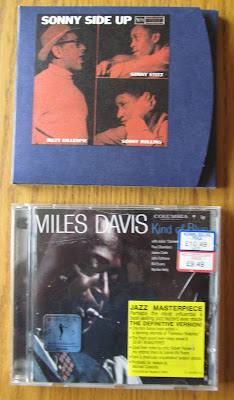 The Dragon's Back Race


Five days, 300km, 17,000 metres of ascent following the mountain spine of Wales from north to south - perhaps the toughest fell race ever in the UK.

The video of the 2012 event, being the first repeat of the race since 1992, should be watched by all sports commentators. There are no silly “how did it feel” interviews. Competitors speak for themselves on the soundtrack as you see them running, and also at the end of each day’s racing.

The fell running fraternity are articulate and you get more insight into the whys and wherefores than I have ever gleaned on any other sporting production.

The sparse commentary avoids patronising information or ill informed hype. The film has been made by people who are wholly involved in the sport. Where necessary useful information is displayed separately in text format with enough time to read it properly, and that is carefully selected. Some music is used, but it is sympathetic and never intrusive.

Above all the scenery is superbly filmed and the performance of the competitors is inspirational.

The video is expensive at £21.45 including postage, but it is worth every penny, especially as I feel it is one I could watch several times over. Here is the link to the website if you want to purchase. 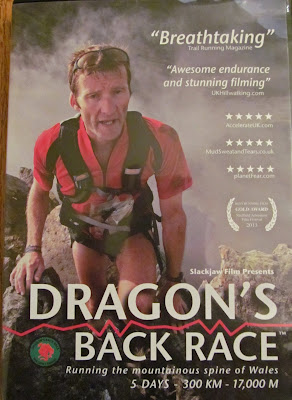 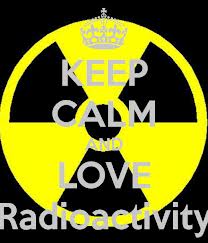 Yesterday Grumpy Knee went to hospital, like a doggy to the vet.

At a private Preston hospital used by the NHS, at 8:30 am precisely, GK had an x-ray, and at 9:00am precisely, a blood test was taken. Here we were treated with the deference accorded to those who can pay. GK was impressed. Our surgeon had specified the right knee. GK is on the left. The staff were worried. I thought GK was going to speak up, but his scar and absence of such on the right finally allayed fear of litigation for the radiologist.

At Preston NHS hospital appointments for the scan were at 10:00 am and 12:00 am, the location being the alarmingly named Nuclear Medicine Department.

The hospital is massive. The Nuclear Medicine Department involved a nerve-wracking journey along corridors too long to see the end of, descent to the lowest level in a lift, right and left turns, and a feeling of increasing isolation. GK thought he was off potholing.

Thoughts questioned the reason for Nuclear Medicine’s location in such a remote part of that labyrinthal building. Concern notched up more on learning I was to be injected with radioactive juice - so that’s how they get rid of all that nuclear waste, eh?

Scan number one took about five minutes, and we were on our way instructed to return at 12:00, “when the radio-active juice has adhered itself to your bones!” GK said nothing.

We returned at 12:00 for scan number two, then we were sent off with instructions to drink plenty of water to wash away the nuclear stuff, not to get close to young children, and not to sleep with pregnant women - I think GK was a bit disappointed about that last instruction.