Sorry folks. After yesterday's post I realised I hadn't referred to the original symptom of my ailment which was constipation.  When my son W. heard sbout this he wanted to bring me the guaranteed solution in the form of a kebab from a place he knows of in Morecambe.

The medics were baffled - nothing showed up on an x-ray, but then appendicitis did on a ct. scan, much to everybody's surprise. And, dare I say, the main thrust of the original problem is now solved,and I am back at home, but virtually immobile, just enough to keep myself fed: I am heeding seriously all the advice to take things easy.

The Evacuation took place this morning (not of Dunkirk), but of something much more personal and it was a three part exercise.

I saw the doc. about 11:00 and she says I can go home. That is the theory anyway, but from what I have observed of others, waiting for paperwork to be completed amongst other procedures can involve delays akin to crossing a communist border during the Cold War, but suffice to say, and to continue the military metaphor, I am looking forward to getting back to civvy street.

An evening at the theatre

All sorts is happening here. This an open ward where curtains are drawn round each bed during visits by medics, but every word can still be heard. One guy is having something shoved up his nose down into his stomach to induce vomiting I think. They've had several attempts accompanied by awful tear jerking- splutter-wretching-choking and I think on one occasion he threatened to bale out and go home.

There is another guy who I think may be homeless who has hurt his elbow. He is quite articulate and intelligent but with some kind of mental problem. He has had a long mobile conversation with somebody from the Mafia who seems to be chasing him for money and he is cursing and shouting expletives in a loud and vicious tirade. Homeless tries to challenge everything with a strange false logic, even trying to re-negotiate the composition of the sandwich offered at great length, and the exact specification for his tea.

"Do you want us to give you an enema"

Another 80 odd year old is a professional Yorkshireman addressing the ward staff in a series of commands with a loud rude irritable military style, "...get this emptied ", do this this do that and then occasionally breaking into a little song - all questions are challenged, "do you want to get up?" In a loud and narky reply, "in what way?"

This kind of thing is going on non-stop at the moment from the two odd-balls. One often hears the cliché "like a pantomime" and I elect to use it here because it is such an accurate description - the more rational of us are commenting on the unbelievable entertainment, and the ward staff seem to be seeing the humorous side of things whilst skilfully retaining their professionalism.

Homeless has now decided to discharge himself against the very strong advice from the senior ward nurse. I had decided to make my first walk to the lavatory, but to my consternation I saw Homeless advancing in that direction, so had a longer walk to the one at the other end of the ward. There was no way I was going in there straight after him.

The ward staff have been exemplary with their tact and patience in dealing with these difficult people. The job is hard enough without all this, full marks to them.

A strange aspect is that during the long afternoon visiting period everybody behaved themselves.

Just heard, "your glasses have lost a lens, did you know that?"

Feel a bit rough for the moment, 9:49 -am so updates later

I've lived in Arnside for nearly fifteen years now and I went to Kendal on the bus for the first time - quite an adventure.

Five minutes walk from home took me to the bus stop for the 9:35 and a chat with a neighbour  who lives not far from me but we have never previously spoken. The bus arrived on time empty. I had to be instructed by the driver on the ritual of using my bus pass  - he seemed quite resigned to dealing with yet another geriatric befuddled pensioner.

By the time we got to Milnthorpe (about three miles) the bus was full - full of greys, and there was a strong whiff of Vick camphor rub and mint humbugs, and a cacophony of chattery-chatter. I never saw a single person who paid. I got the impression that many of the passengers just came for the ride and the social occasion - it was all very period, like a scene from Dr. Finlay's Casebook. I felt a bit guilty, and possibly anachronistic sneaking a quick photo down the bus with my iPhone.

From Milnthorpe a left turn took us on a network of country roads only about a foot wider than the bus, and through tiny villages. The driver seemed to be up against a tight schedule scything along much faster than I do in the car, and the closeness to hedges, lampposts and walls on the lefthand side demonstrated astonishing skill; I wondered at our avoidance of major contact with anything other than twigs and branches. There were occasions when cars were met coming the other way, and it was invariably our driver who did the backing up showing another facet of his mastery of bus handling.

We landed in Kendal on time at 10.21 after 56 minutes exhilarating travelling time that would have been much longer due to caution if I had been driving my car. My direct route to Kendal would normally take about twenty minutes. I returned on the 12.45 docking back at 13:40, so it doesn't have to be an all day event as I had anticipated.

Would I do it again? Oh yes! 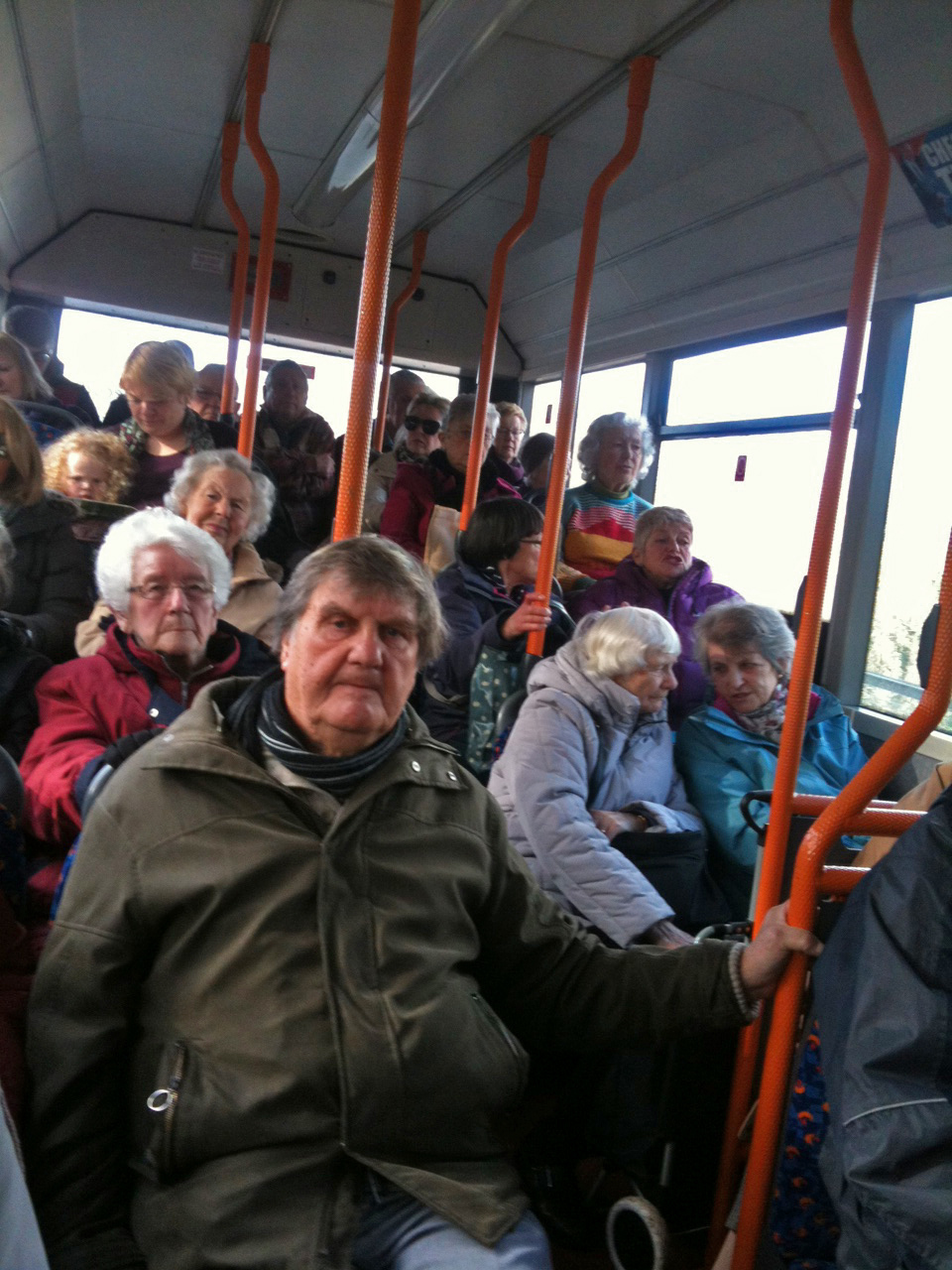 
Thursday - 8:50 am
5th March 2015
I pay my weekly visit (on-going since last September) to the nurse at my gp's since I inflicted a wound on my shin on 19th September last year - that is almost six months ago. Today the wound has healed over and stopped discharging for the first time. Wow! That's been a long haul.

The problem was complicated by cellulitis in the same shin area, and also by discovery of a blood clot. I have lost count of the medical people I have seen (mostly with differing opinions),  self injections, swabs taken, hospital car parking problems, and doses of antibiotics consumed. Recently the cellulitis re-emerged after being more or less banished, and after another course of double-dose (risky according to one gp) antibiotic it has retreated again, and I feel now that Leg and I are nearly there.

Readers will see that I have been active in the outdoors during most of this period with day walks, and providing I don't wear boots to chafe my ankle I am doing ok with trail shoes, but left untreated the problem could have been very serious.

I am feeling stir-crazy and straining to be off on a caravan Marilyn expedition and then another backpacking trip after Easter when weather has warmed. The daily routine at home is becoming tedious, and conversations with people seem to revolve round old age, illnesses, and recent deaths and I want to be off for new encounters, and to let the wind blow, the sun shine, and the rain to cleanse.

I have walked on the last two Thursdays, first with both Petes and yesterday with regular Pete. Regular Pete, at the age of 80 is combatting rheumatoid arthritis, and responding quite well to treatment now, but we are restricting our walks to maximum five miles and wherever possible on Tarmac.

Here are a few photos: 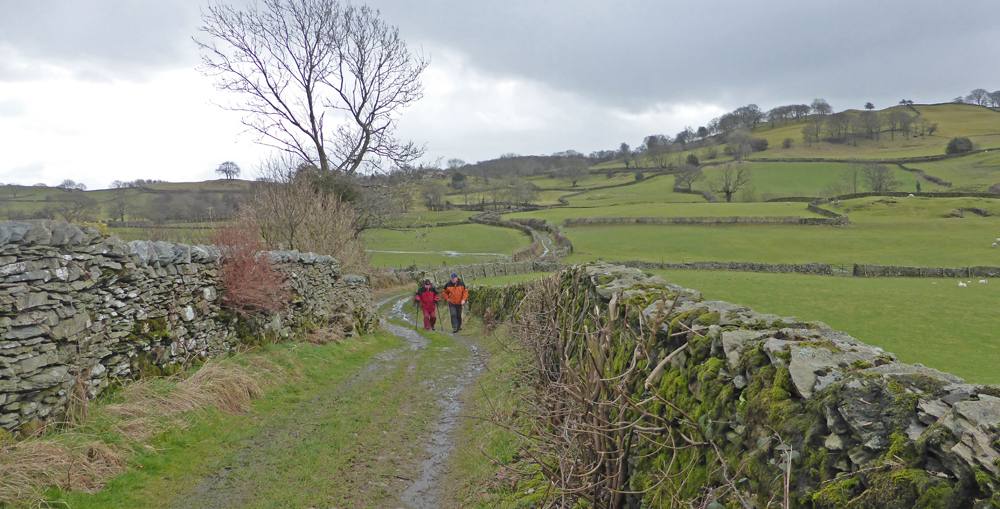 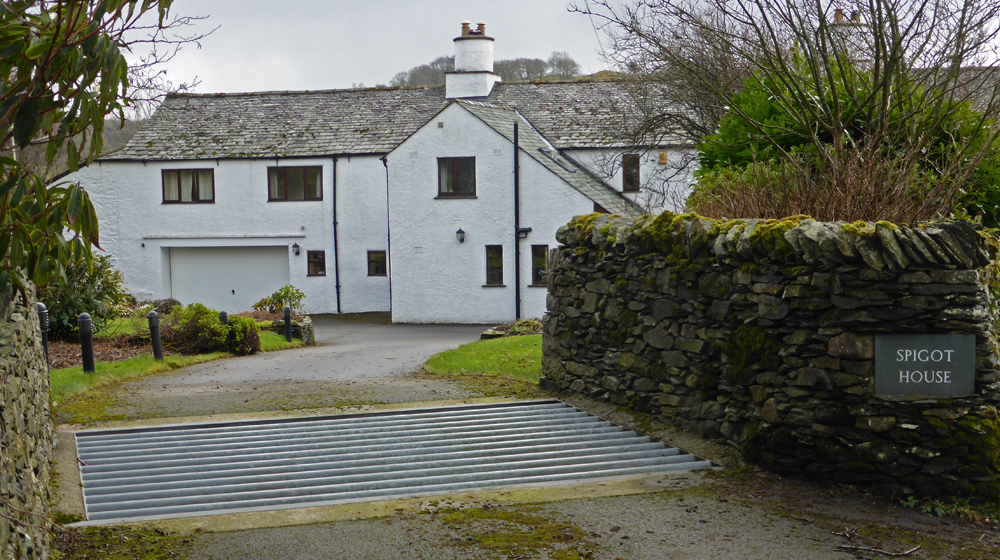 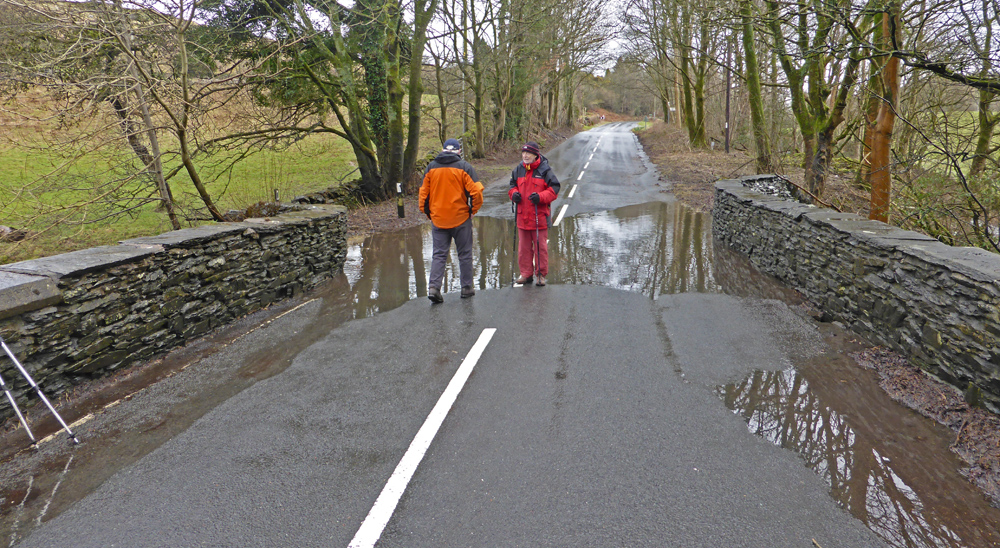 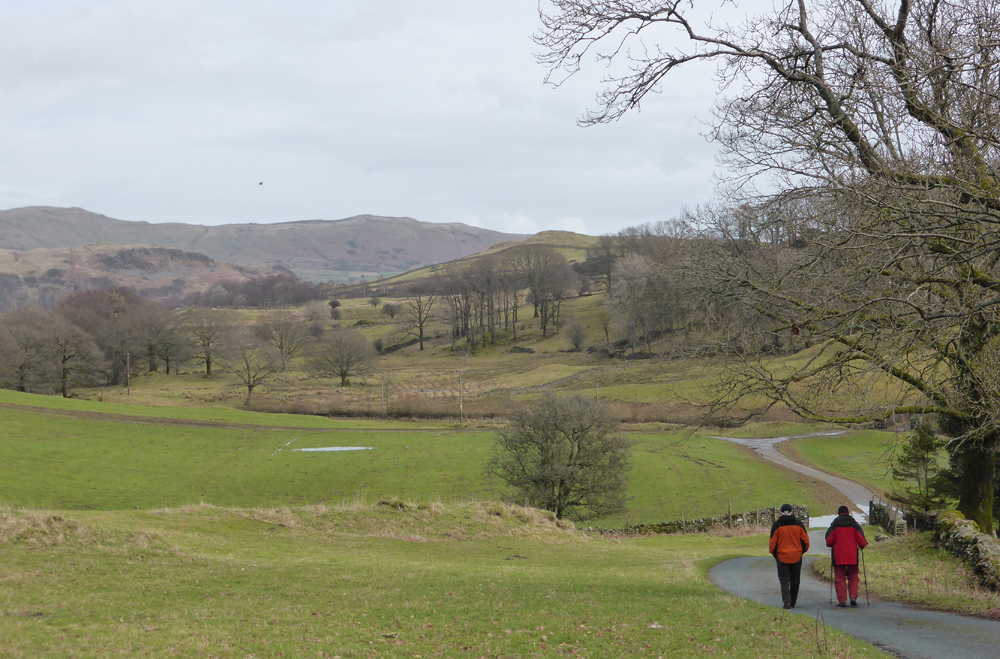 Thursday 5th March - to the east of previous photos, between Windermere and Staveley 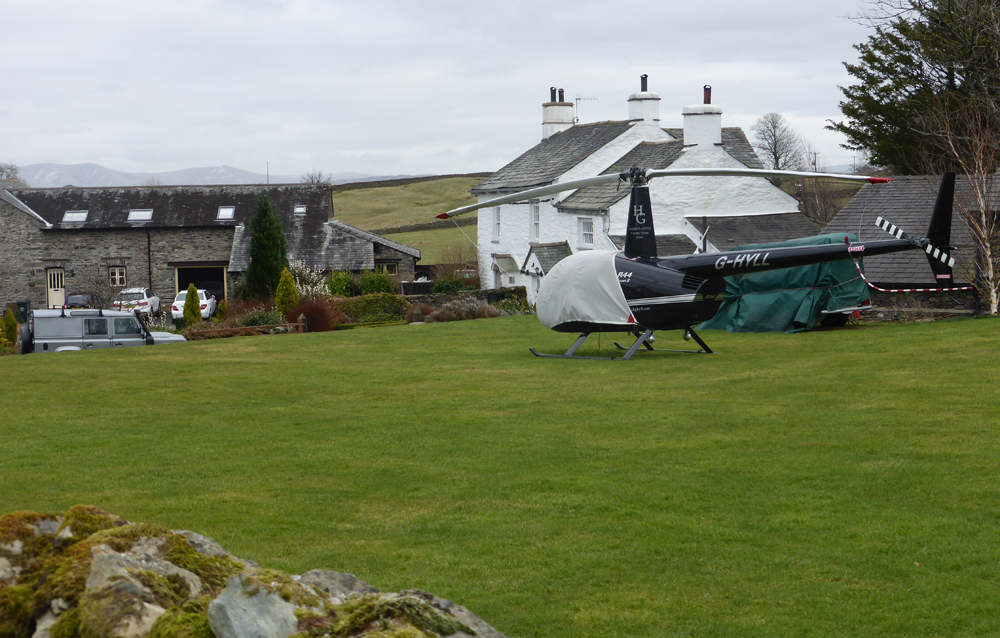