Thursday walks with Pete are becoming ever more difficult to plot without repetition. We have covered most permutations of circular walks combining footpaths and minor roads within a large radius from Arnside. Until a few months ago all these routes still appeared on Memory Map on my computer so that I could see where we had previously been. All those disappeared when I experienced problems and  had to uninstall and reinstall loosing all the overlays, so I am now relying on my memory. It may be that the software problem arose from "overload of overlays" !

I found this walk on a walking website by chance. Normally I would spurn such a source being sufficiently conceited to opine that I am capable of devising my own routes, but then I realised such information is worth considering because the route went through the middle of the town of Lancaster, but seeking out interest and pedestrian ways which are not obvious just from the map.


In my last post I mentioned "my orange tent".

As an impecunious employee I had to resort to hire-purchase incurring charges of 8s.6d. and six monthly payments of £2.18s.0d.

Our motley crew of climbers would go off to The Lakes, or the Sheffield edges and other venues at weekends and mine was the biggest tent. In bad weather there would be half a dozen of us crammed in there.

Other memorable trips amongst many saw that cherished tent on Sky, Arran, Rum and various other Scottish locations, Wales, the Ring of Kerry, and a motoring trip through France to Spain and back through France to Amsterdam, and later used as a play-tent in the garden by son and daughter and their friends; it certainly had a lot of use.

I was interested to see how the old friend had fared after years of storage so it came on the Liverpool trip. I was surprised to find out how big, and heavy its packed size was, and also pleasantly reminded that it is possible to stand up in the middle. I felt as though I was sleeping on the floor of St. Paul's Cathedral.

The material is cotton and still holding out fairly well, but I don't think it would stand much of a storm.


Click to enlarge to see deatals of printed documents. 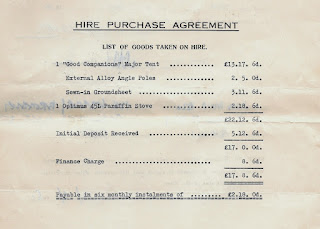 Details of cost from the multi-page hire-purchase agreement which was signed over a sixpenny stamp. All typed - no word processors in those days 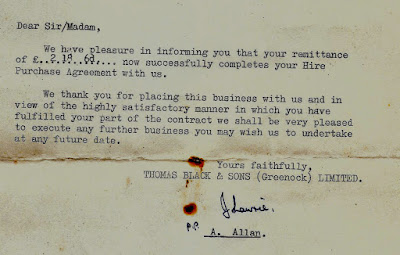 Last Tuesday and Wednesday I had a trip to Liverpool with daughter (High Horse) and granddaughter Katie. I have plans for a walking trip abroad and my passport had expired.

We  tented near Formby arriving mid afternoon, and then drove down the coast to see the "Another Place" Antony Gormley statues. The tide was going out, and ever more statues changed from heads poking above waves to full figures which were able to approach and examine, and we played games with them for Katie. Oddly Katie, now three and a half has rarely visited the seaside and she was like a captive animal being  returned to the wild running, leaping, dancing, shouting, waving and dashing in and out of the waves. I have seen detailed film of the statues on TV but the real life version combined with a happy family outing is much more rewarding.

On Wednesday morning we drove into Liverpool early for my 10:00 am passport appointment (advised to be there ten minutes before). With the car parked we had a good value breakfast at a café in the Capital Centre and arrived at the passport office at 9:40 and I was seen at 9:50, ten minutes early! Well, it costs £128 for this fast-track service so one would hope it works efficiently.

A walk to the splendidly developed docks waterfront took us to the main museum. We then had a longer trek to  see the new library and the adjacent Walker Art Gallery. The new library has been cleverly built inside the old 1860s building with a stunning spiral central theme going through the floors to a roof-light, and impressive integrated staircase.  This is one of the most imaginative architectural venues I have visited and definitely a must see - worth a special trip.

Upstairs parts of the building have been left as original 1860s with beautiful wood panelling and glass fronted bookcases containing the most eclectic collection of rare books, some of huge proportions and others superbly bound - a few titles at random: German Incendiary Bombs, Flowers of the Brazilian Forest, An Account of Indian Serpents (two volumes), Fine Bird Books, 1790 to 1900, Chiaroscuro Prints by John Skippe. I could have spent hours browsing at this lot, unfortunately, and wisely their glass fronted cases were locked.

By this time we were flagging resulting in a lightning tour of the well worth a visit Walker Art Gallery which would certainly be worth returning to. We caught a bus back into the centre to pick up my new passport.

Liverpool has magnificent old buildings and lots of modern architecture which seems to combine well with the old, and with the added attraction of a now superbly developed waterfront There is a distinctive ambience about this characterful city, and for my money I would prefer to see it win the  battle for the supposed, unofficial Capital of the North against its rival Manchester. 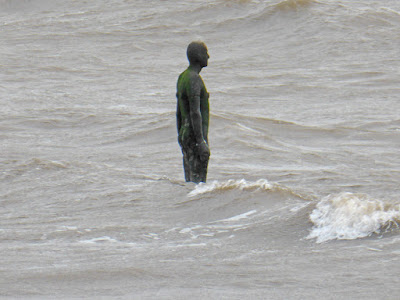 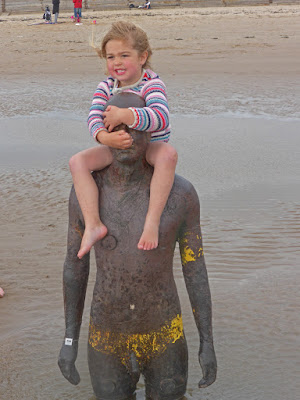 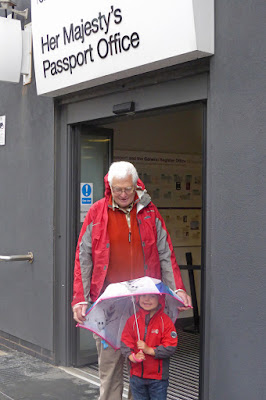 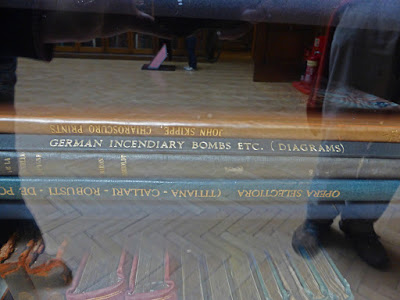 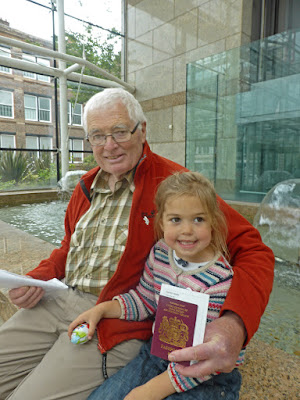 Yesterday was my Thursday walk Pete and also this time with Pete Two We  had another addition to the party with grandaughter Katie who is now 3yrs and 10 months.

Well, I could do with a similar soothing walk at the moment. A few days ago I negotiated a Vodafone update. I received the wrong phone and today that should have been picked up and the correct one delivered. Not having received the customary confirmation email I have spent all morning on the phone to Vodafone. I lost count but reckon I spoke to six different people, had three seperate long phone calls, and been on hold for several periods in excess of 20 minutes (actually timed by my phone) listening to the same pop song over and over, and over and over. As far as I understand there has been a mess up - the order has now been re-established and I will, supposedly, receive notification of the new delivery/pick-up time within the next 48 hours.

I can't help but be annoyed and frustrated at this service, but putting it in context with the wretched existence humans have in underdeveloped countries, and countries with catastrophic political upheaval I shouldn't really be complaining, but the way things are going I reckon we should not be complacent about our privileged way of life.

We walked up the Lancaster Canal from Crooklands picking up two geocaches and failing on two others. Geocaching is great for young children. The round trip was just over four miles. Normally I think children get bored rather than tired, the symptoms being similar, but geocaching provides interest and diversion. Katie walked well until the last quarter mile on the return when I lifted her onto my shoulders - that took two attempts. I don't think it will be long before I could not physically lift her like that having to fully extend my arms holding her above my head - how fast they seem to grow. 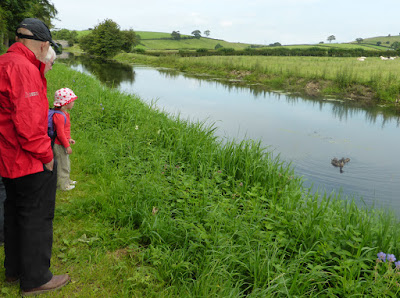 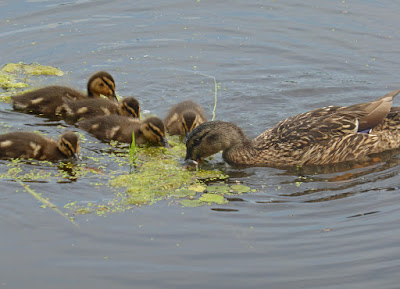 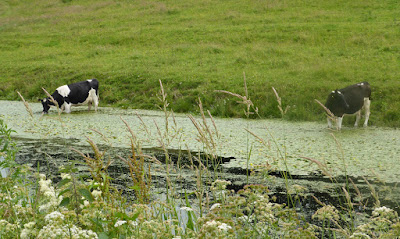 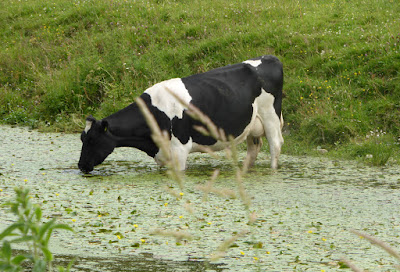 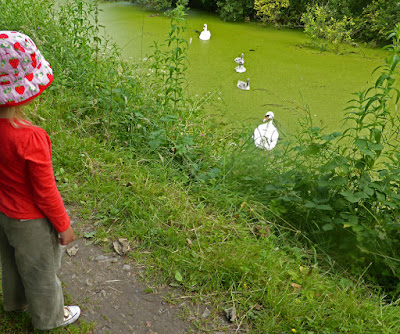 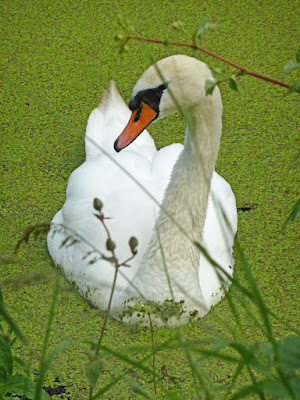 They came to make off with Charlotte's ice cream. 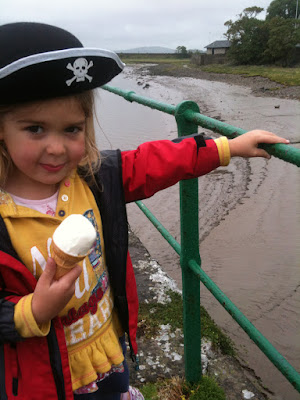 I now rank with Mr Fleming and his accidental discovery of penicillin.

Thursday walks with Pete have been erratic with absences on other sorties, but we were back this Thursday.

Pete is punctilious and attaches importance to reliability in friends. When I arrange to collect him at 10:15 it means 10:15 precisely. I am similarly inclined, so when concentration on a difficult game of Freecell found me overrunning I panicked and rushed off to keep lateness to a minimum.

At Arkholme, an attractive village upstream from Lancaster on the River Lune, I found I had forgotten my now famous Mountain Warehouse trail shoes. I was still wearing my Crocs.

Tarmac was followed by the footpath following the river Lune, over stiles and through long grass, and sections of rugged cow-trodden pasture. and then more Tarmac. Even though I had previously removed the heel strap  from the Crocs for packing and lightness when backpacking they remained comfortable and fit for purpose over more than five miles.

Since my shin wound last September, which took six months to heal, I have had problems on that ankle resulting in consultant's diagnosis of venous eczema which is uncomfortable, and not a pretty sight. I have to daub the affected part with emollient and wear knee length compression stockings permanently. Boots cover part of the ankle so for some time I have been wearing trail shoes. but my Fleming moment came on Thursday when I realised the Crocs' performance across off-road terrain, combined with their low sides may provide a practical aid to my problem.

I hope to do another twenty day backpack before the end of summer, and subject to awaited medical advice on the ankle I intend to wear the Crocs on Tarmac and dry paths and tracks, but also taking the trail shoes to use in the wet or in case the experiment fails. I think there is some tunnel-vision about walking footwear. I agree boots are advisable for Munro type mountain territory, although I understand Chris Townsend generally only uses trail shoes, but for benign country backpacking I don't think stomping stout footwear is necessarily essential. Comfort is the most important factor. 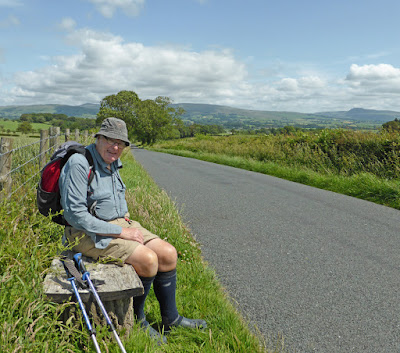