Here is an exchange of emails with Plumb Center (note the spelling). A customer complaint is a great opportunity to transform negative into positive for an accomplished public relations person, which is what you would expect a "Customer Services Executive" to be, but this one has turned it into a double negative. It continues to surprise how so called qualified people hold down their jobs.
Yesterday I went to your Kendal branch to buy a standard bath waste and overflow. They did not have one in stock. This is a basic plumbing item and I just do not understand how a specialised business like yours could fail in such an elementary fashion.
Good morning,

I have had a look on our system and Kendal plumbcenter are showing a standard bath waste and overflow in stock.
The one I have found can be used on any bath. The plumbcenter catalogue number is C50004 or if you would like the
Pop up version the code for this is C50070. The branch are showing both of these in stock. Both of these codes are
Chrome. If you wanted white or gold we would have to order these in for you but the standard chrome ones are stocked.
Leanne Bowles
Customer Service Executive
Whether you had it in stock or not is irrelevant. From my side of the fence the only thing that mattered was that you were unable to supply it, and your reply gives no hint of regret for your failing.

Hi There
Would you like me to process this as a customer complaint to the area manager for the Kendal branch?
Regards
Leanne Bowles
Customer Service Executive
Do whatever you think, but I will be reluctant to shop with Plumb Center again. It is like going to the seaside and finding no sea.
__________________________________
I have a telephone that was presumably "designed" by a qualified designer - it stands vertically on its base obscuring the light that blinks behind it informing you of a recorded message. Many is the time I have missed seeing the blinking light because I cannot see it without a conscious effort. I wonder how much the "designer" was paid? 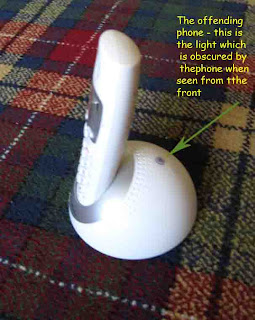 The demise of Tom Tom, a good friend

In November 2006, after installing sliding doors for my brother, on returning home I received a Tom Tom car navigation GPS: an unexpected gift.
Although I do not travel extensively around the country I have used TomTom more than I anticipated, and now regard it (her) with affection.Yesterday I  fired up my friend to navigate to an address in Barrow-in-Furness (don’t go there unless you have to). Tom Tom remained dormant.
After searching the Internet I guessed a new battery may restore life, but also learned that a special tool is required to open her up.
At Sunday opening time (10:00am), I was at Halfords in Kendal. The  sales chap asked me how long I had owned Tom Tom. When I said “three or four years” he said he had learned from the manufacturer, to his own surprise, that this was, disappointingly, the predicted lifespan. He said, apologetically, I may send it back for repair but the cost would be high.
I ended up buying a new” Garmin nüvi 1300”. I recently commented on the name Neutrino given to my new RAB sleeping bag, so what about this one -”nüvi” I mean? Google informs me that Garmin is, drearily, a composite of parts of the two surnames of the company’s founders, but Google fails on”nüvi”; I suspect it is a made up name, but if so what are the connotations, or what is it saying?
Selling a gadget like this for around £100 without informing buyers that its expected lifespan is so short seems like criminal deception to me.
Posted by Sir Hugh at Sunday, January 16, 2011 1 comment:

Here is the promised graph of my jogging progress with Wii. Because I missed two days the line on the graph does not link up - I suppose if I put nominal 8.08 values in it would. 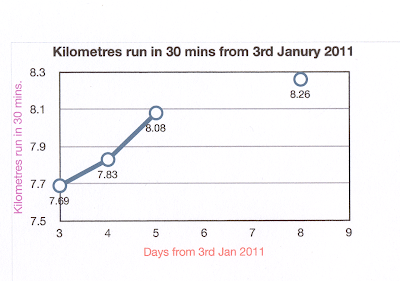 So far I have had four sessions of 30 minutes each. On my last post I mentioned an average speed of 5.4mph - this was wrongly calculated.

My average speeds so far have been:

I have just ordered a RAB Neutrino 200 sleeping bag for my forthcoming circuit of Wales - where do they get these names from? I thought the main feature of a neutrino was smallness, whereas the sleeping bag's main attribute is lightness whilst maintaining adequate warming properties.
Posted by Sir Hugh at Saturday, January 08, 2011 2 comments:

My daughter found a website which automatically entered one for competitions. Surprisingly she won Wii Fit Plus which retails at around £200.  For the uninitiated Wii, is a unit holding a DVD plugged into your television. Games appear on your screen and you can play. Holding a remote controller your movements are translated into tennis or golf shots or whatever enabling you to physically compete. There is also a “balance board” that you stand on enabling cycling simulation, and most interestingly, slalom skiing - as you bend knees and lean your replica on the screen negotiates, or fails to negotiate  slalom gates.
Wii has been heavily advertised on tv. People playing with this virtuality appear as wallies because they are miming the real thing, but in fairness meaningful amounts of energy can be expended using the equipment seriously.
Jogging on the spot, holding the remote, can be undertaken without the board. Cartoon scenery is shown on the screen as you move through at realistic pace. Other runners appear, some you catch up, and some,  annoyingly, overtake you, and others, rather masochistically,  trip and fall.
Initially I was skeptical about Wii, but I have found the jogging option addictive, convenient, and a seriously useful means of keeping fit without having to venture into the miserable winter weather.
I have now done three thirty minute sessions the first one averaging just over 5mph and the third 5.4 mph.
Influenced by Gayle (a fellow blogger, backpacker and statistics devotee - "Gayle and Mick" under the links on my blog), I  intend to create a graph showing progress, or otherwise,  but I need to get back to the stats which will show up on my next session.
Posted by Sir Hugh at Wednesday, January 05, 2011 1 comment: