A gem of a walk from Sedbergh

For reasons I'm not prepared to divulge I walked this route in the opposite direction indicated in the guide - my direction is shown on the map below.

The authors suggest starting from the centre of Sedbergh which necessitates half a mile each way on the main road to Dent, the only attraction being a view of what I presume is Sedbergh's public school cricket pitch immaculately  mown right out to its boundaries by some OCD groundsman.

The obvious place to start the walk, in my opinion, would be at the lay-by parking by the bridge over the river Rawthey. The bridge provides a good view of the more than usually attractive river, even for the Yorkshire Dales. Here I took a zoom shot of a grey wagtail.

My little grumble is somewhat unworthy for this fine walk which incorporates parts of The Dalesway and the Dales High Way, two of the best long distance paths in the country. If one had to recommend a walk in the Dales for a newcomer this would be a strong candidate.

A short road to the left takes one into the tiny and pretty village of Millthrop from where I was soon onto ancient drove-ways and lush terraced paths on soft green grass interspersed with old woodland and views down Dentdale enticing one to  explore further than this day would allow. The skyline of Holme Knott on the other side of Dentdale dominates and must provide good ridge walking. I have done part of that in the past when visiting the trig.

I knew I was back in Yorkshire at Leases Farm. An elderly gent was sat chatting to a local visitor with her nwely acquired electric bike. I had stopped to look at my map to see which side of the farmhouse the path followed.

In supposedly jocular fashion the old guy addressed me.

"No I'm not, I'm just checking which way the path goes"

This went on for a while before we settled down to more mundane conversation about my intended route and the merits and downsides of electric bikes. I do hate it when you are looking at your map and passers by assume you are lost. In the worst cases they then start trying to impose on you some alternative route  based on what they consider to be their superior local knowledge.

A stretch of country road followed but with  interest and still the overall ambience of just being in a good part of the Dales.

The route now climbed on paths to higher ground. At one point a fascinating gate designed for quad bikes with a system of counterweight had me puzzled for a while before I worked out how it operated. See the photos below.

After this I levelled out following a good moorland path running parallel with the Dales High Way and a few hundred yards to its south-west. At the high point of the undulations a ladder stile crossed the boundary wall and a welcome large flat through stone provided a comfortable seat for my sandwich and coffee break.  I lingered there for over half an hour in the warm sunshine with deep blue sky and rolling white clouds. At one point i listened intently. A long way off there was the sound of a hard pressed motor bike exploring its rev limits in each gear, and then nothing but the odd cry from a lapwing and the trill of a skylark.

As I popped over the stile I was startled by a friendly barking collie and a local couple  who had this walk as far as the wall as  a regular for them. They told me they had never seen anybody coming over that stile before. The moorland on that side of the wall was strewn with abundant bog-cotton and I took an arty photo using that as foreground with the Howgill's southern flanks in the backdrop.

A steady descent and bit more tarmac had me back to the bridge over the river Rawthey and the minor anti-climax of the half mile up the main road to my car.

That was the best walk I have done for some time.

Worth clicking photos to enlarge. 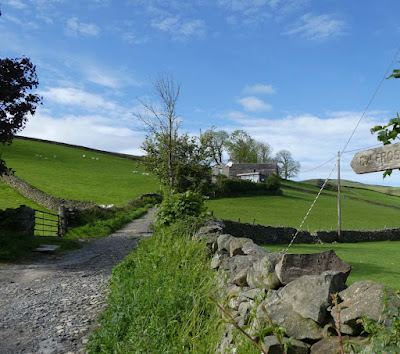 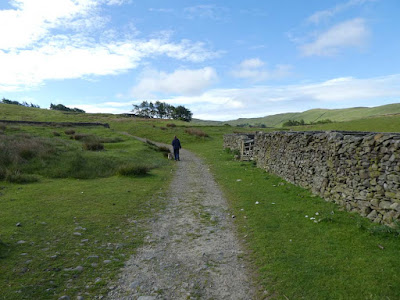 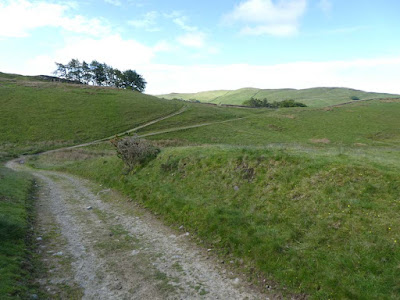 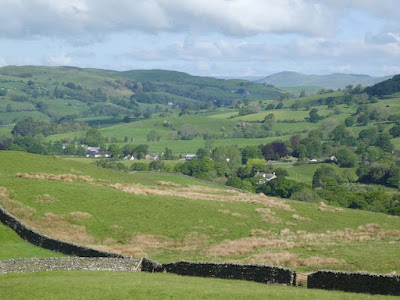 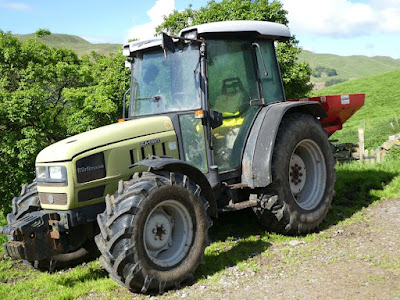 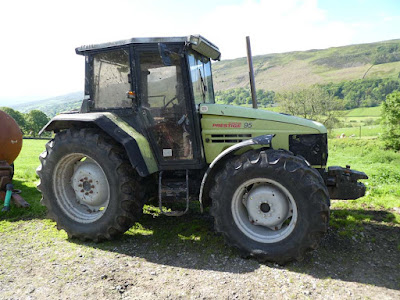 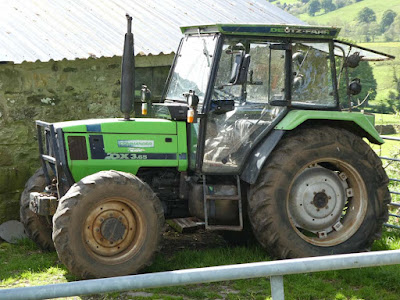 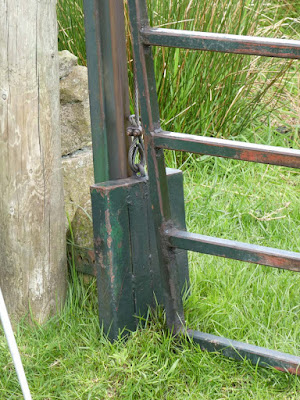 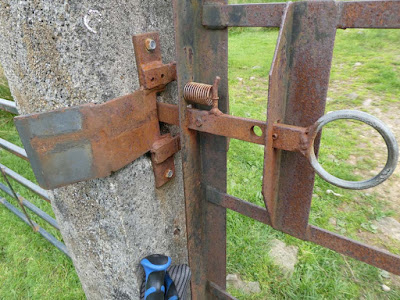 A large part of my attraction for walking comes from exploring new ground. But today I had no reservations about including part of the M6/A6 Borrowdale.  I discovered this Borrowdale years ago and fondly imagined it as my own secret valley and so it became one of my all-time favourite locations.
Amongst many visits over the years I have walked the southern ridge of this horseshoe but not the northern and I was pleased to find the secret to its access to Jeffrey's Mount from the north.
It is noticeable the change in scenery between the Howgills to the east and the now Lake District hills to the west separated by the M6. The Howgills for me have a kind of lonely sameness overall whereas back in Borrowdale and beyond we are in the true friendly and incomparable Lake District territory..
After parking at Lune Bridge a bit of tarmac leads to the climb up to Jeffrey's Mount which proved to be relatively easy, the sun was shining and I felt fit. However  as I climbed the wind increased.  The undulating ridge from that first summit was perfect walking on a broad grassy track but the wind was ceaseless the whole way and very strong. I was tempted to continue to the end of the ridge where Borrowdale arrives at the A6  Shap road but decided to leave that for another day and I reluctantly descended to  Low Borrowdale Farm As I passed through a gate just before arriving at the farm I was greeted by two friendly horses who were pleased to have a tickle and a scratch. It is good to see two together like that, I often feel sorry when I see them alone in a field especially when the weather is less than perfect. These two had enormous feet which seemed to give them an endearing quality,.
Now walking back down my enchanted Borrowdale the wind had dropped.  the sun was warm, asd all was delight. I walked slowly and kept stopping to look up at the steep  sides of the valley and the blue sky above the line of the ridge. I dallied to prolong this part of the walk.
Just past the farm  a tent had been erected by the Fell Runners Association for a forthcoming or past event. I tall looked a bit messy and out of character for these guys who I much respect and  who usually do everything to a high standard.
Where the track crosses onto the other side of Borrow Beck  a lone guy was repairing the bridge but he was not very communicative and we didn't get past  comments about the weather. Where the track emerges onto the Lune Bridge/Tebay road  the route went straight across on tarmac to Salterwath Bridge, From here a path heads north through old woods and then pasture following the River Lune which rattles and flows in lively fashion down this Lune gorge where Lune, railway and M6 are crammed side by side. That sounds a bit grim but I have found it a surprisingly attractive locale. Bird life was abundant and seemed undisturbed by the occasional high speed train passing through.
That was a good walk with individually defined sections giving variety and interest all the way.
Please click photos to enlarge 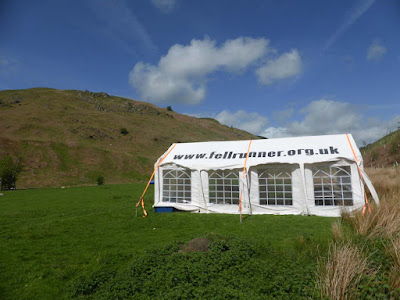 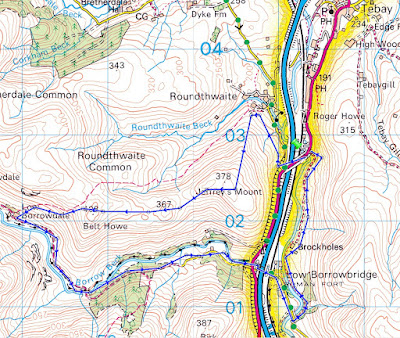 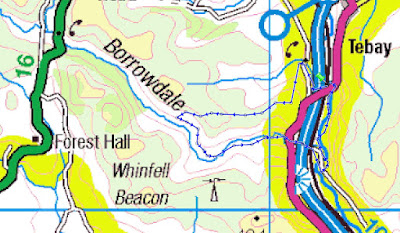 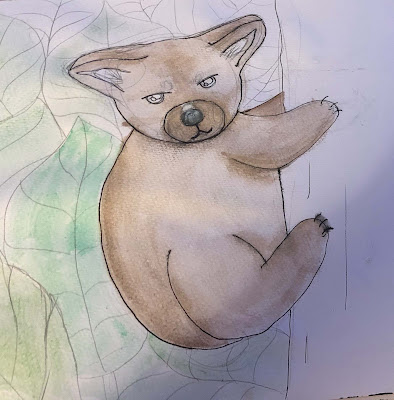 This iconic Japanese fighter attracted me with its design and colour scheme, an interesting change from the camouflage of the British RAF planes I have modelled so far.

I hope to place a fairly detailed record of this one model of my efforts in a series of posts to show those  interested more idea of what is involved. This will be mainly  pictorial description.