"Have a nice day"

Some years ago, with my sadly, late good friend, and climbing partner Tony, I climbed in Spain along with local Spanish climbers. Tradition observed an accepted programme: starting with morning coffee, then climbing together during the day, and finishing off with a communal evening meal. Providing that programme was fulfilled they referred to it as El día completo. I liked this appreciation of the sport which demonstrates that its attraction derives from more than a narrow minded nerdish attention to achievements on the crag.


El día completo is of course appropriate to rock climbing because it is a multi-person pursuit (unless you are a nerveless devotee of E-grade soloing). Whilst I do enjoy the company of perhaps one or two others on the hills I also have my own version of El día completo.

At 8:45 am today, inspired by Blonde Two's daily post (The Two Blondes) which I regularly devour along with my breakfast, I decided, on a whim to make use of a clear-blue-sky-frosty-morning and depart for the Howgills.

My day-walk rucksack is by habit in the car, and a flask of coffee and some biscuits was all I needed. The car was fuelled, so no need for an irritating pit stop. At The Cross Keys, the setting off point for the eastern Howgills, I bagged the last parking spot in the small lay-by, and I was off following one or two people on the well trodden path to The Calf, the Howgill's highest peak, but before the steep climb started I left the herd and peeled off north ascending steeply on my own on pathless fellside aiming for the col between Ben End and Yarlside, the latter peak being my objective - it is one of my remaining unclimbed Marilyns in Area 35 of Dawson's Relative Hills of Britain which provided the original Marilyn listing. Whilst a chance meeting with fellow fellwalkers is fine it does add to the feeling of remoteness and adventure if you have the terrain to yourself, which I did today, but once above the col I was walking in fresh snow and saw that someone else had been ahead of me, although I saw nobody for the rest of the walk. From Yarlside summit I made an exciting steep descent on snow, and then down to the valley and back on a farm track and a short section of road to make a satisfying circuit. Walking along the road I looked up at the hills from the valley still sunlit, but the tops were wearing clouds  with intense blue sky above - it was like an upside down inversion.

I was back home by mid afternoon wallowing in a hot bath and finishing the evening with some half decent tele, a good meal and a glass or two of red.


WORTH CLICKING TO ENLARGE 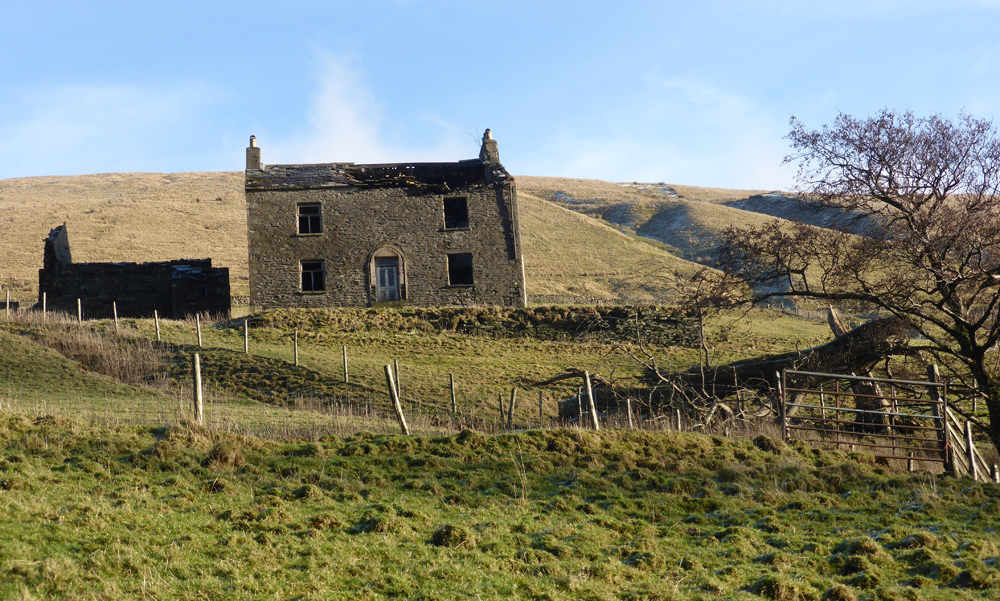 Christmas and New Year's greetings to my readers and thanks for  all your comments during 2014. 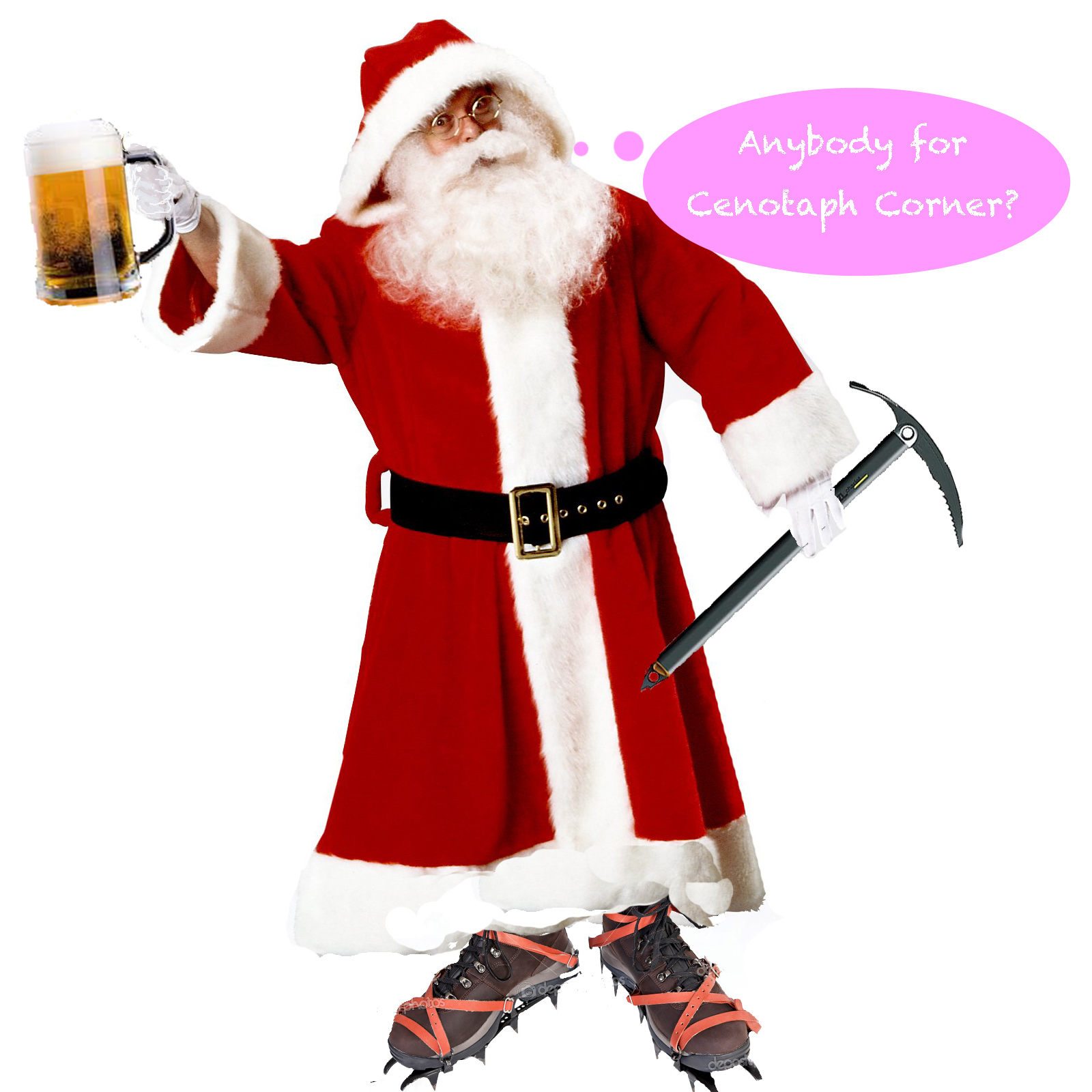 I've just received a card from our local MP -   I am in no way promoting this from a political standpoint other than to say this guy has been a workaholic in our region for several years contributing to many local improvements, and in particular the saving of Kendal hospital where we are now on the way to securing a radiotherapy unit, saving people a 100 mile round trip to Preston.

The outside of the card is based on a competition for local childrens' art, and it is only on the inside that there is a happy family portrait (note the typical Springer Spaniel straining to be off) contrasting starkly with the recent self publicity and strangely miserable photograph from Blair. Ok, it is easy to be cynical, but the enclosed letter, for me, sends a message of genuine caring and a will to making a difference stemming from continuous hard graft rather than glory seeking. It's a shame we haven't got more MPs with this kind of dedication, regardless of the political agenda of their party (except for UKIP and perhaps one or two others!) 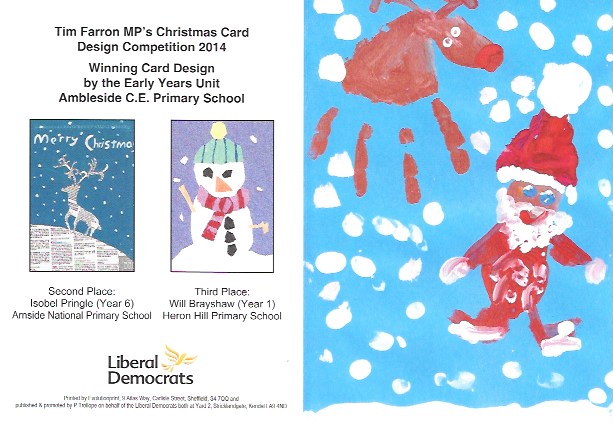 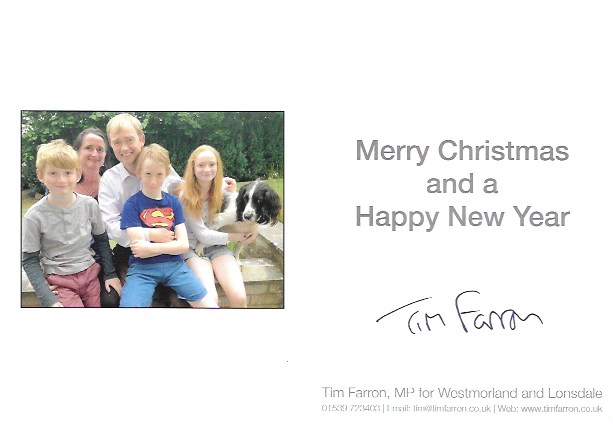 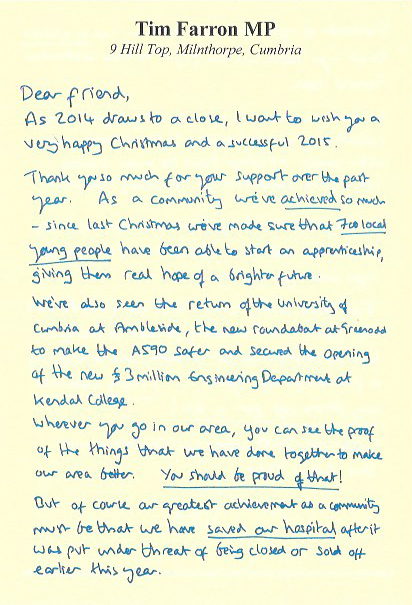 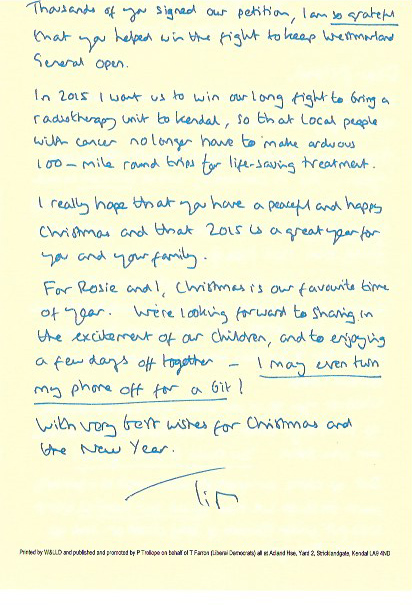 Ok, I'm an old fuddy-duddy and of course a grumpy old man, but I find it hard to endure seasonal parties that become disco nightmares making conversation impossible, and displaying aged contemporaries who should know better gyrating and gesticulating like crudely made automatons.

My son who is now gone forty and probably closer in time to my viewpoint than the time when he was a legitimate partaker said to me recently at one such event, "let's get out of here before they start doing the conga".

What about the new buzz word? - redact, or should I say redact ?

I'm waiting for my first: amazing,  robust, redacted, emotional roller coaster post, which will ensure that such a thing can never happen again". If it does happen (the post, or again), "my thoughts will be with the blogger and his (or her) family". Of course I am typing this prior to my broadcast, standing outside the headquarters of ConradWalks.Blogspot.Com in lashing rain and darkness, round about midnight, wearing a fairly expensive suit protected only by a cheap umbrella lent to me by the sound recordist.

Once again, Merry Christmas everybody.

My Christmas policy is to do nothing until after my birthday early in December. I also admit to the arrival of winter when I awaken my Paramo Cascade waterproof/windproof trousers and jacket from their summer hibernation  - strange, are there any animals that hibernate in the summer?

Well, the birthday passed a few days ago and I did the Christmas cards and ordered a couple of pressies on line. On Wednesday evening I had need to go out to the garage and I felt like Scott trying to get to that last depot, and mindful of the Thursday walk with Pete next day I reckoned it was wakey-wakey time for the winter gear. Along with the aforementioned Paramo brand stuff, which is heading for classic status, there was one other all time favourite to be aroused which would count in my top ten list of global design classics.

In 1960, before setting off on a trip to Norway with Pete, I bought  myself a pair of Dachstein* mitts. I am not sure when this classic item first became available but they have stood the test of time in terms of practicality and durability (mine are still as functional as they were over fifty years ago).

We walked again in the vicinity of Simpson Ground (see my last post), keeping to tracks and reasonable surfaces, but there is a top of the world feeling here and we were blasted by fierce icy winds blowing themselves out after Wednesday night’s gales, and at one stage had a rare difficulty in the Lake District of finding a crossing for a swollen stream, but it was good to be out equipped with appropriate attire making the difference between hardship and smug comfort.

Today I do the Christmas Tree.

* Needlesports in Keswick are excellent suppliers with a good website giving advice based on their own knowledge of and participation in climbing and hill walking, beyond the usual manufacturer’s blurb. Their review and photo of Dachstein mitts tells all: 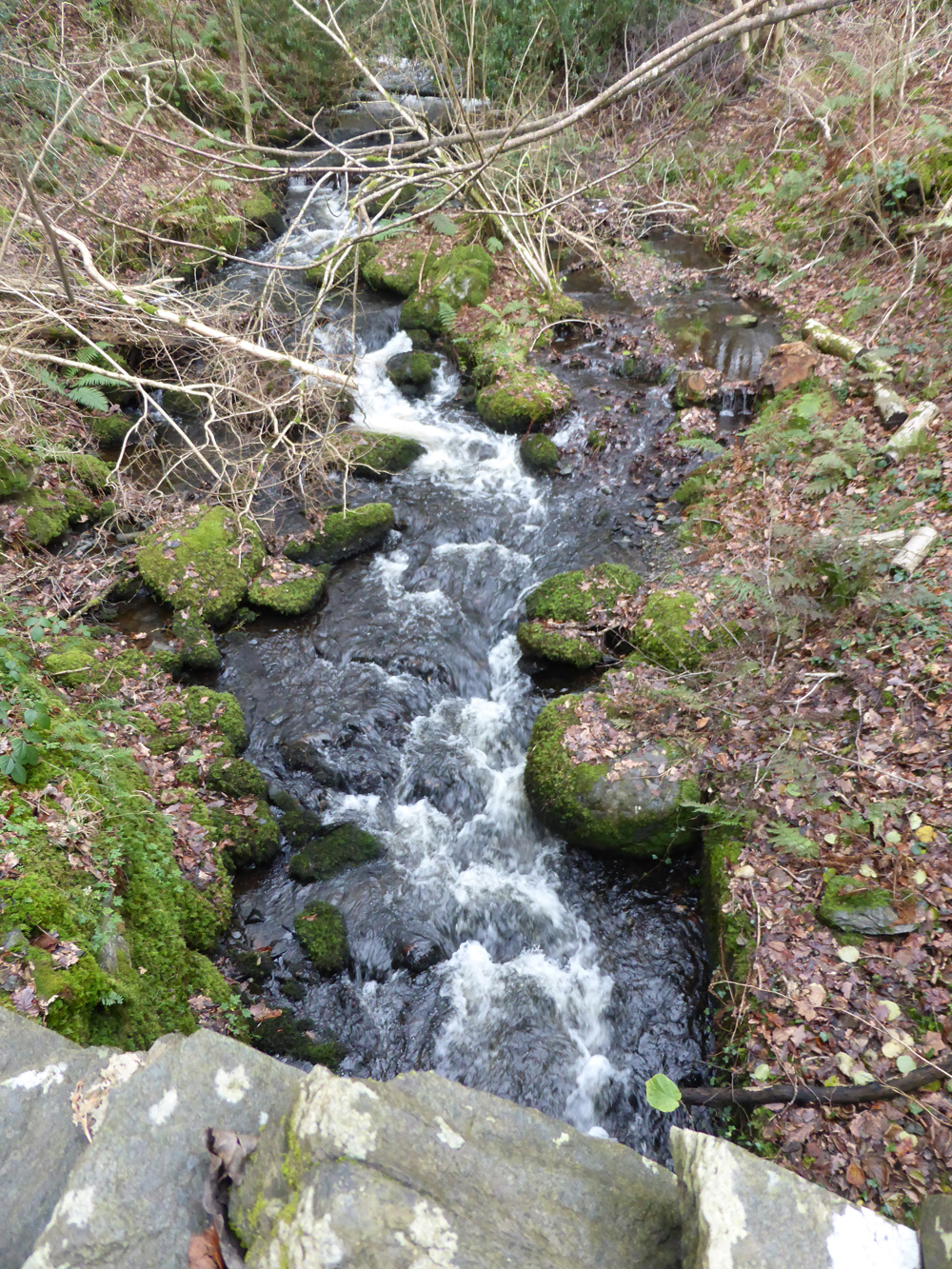 It's who you are with that matters

"I reckon it's getting dark."

My words after finding our sixth geocache of the day at the edge of a secret tarn in the middle of an oh, so remote primeval swamp-forest  unknown to the rest of humanity. I was jesting a little in consideration of it being well into the afternoon and it having taken us five hours to cover only four and a half miles.

My explorer companion was Bowland Climber, a regular commenter here. After we scratched, scraped and squelched our way back through the swamp-forest to more familiar territory, frequently consulting compass and GPS, we did find ourselves, yes in the dark, marching steeply down a Tarmac road overlooking Windermere, but with just enough light for a glorious flame-red sunset high up above the distant hills on the other side of the valley.

BC had not  geocached before, although he is a veteran of more long distance walks here and abroad than most trekking enthusiasts have even heard of. A lot of the terrain was challenging with tussocky swamps, dead bracken, gorse, dense fir forest and difficult route finding, enough to discourage most self proclaimed adherents of the outdoors, but not BC.

I am in my element with such challenges, but if I am with someone who is not game for it my day is ruined. Successive immersions of boots, and desperate fights through forest were greeted by BC with more and more laughter and amusement at our self inflicted discomfort, and a constant stream of interesting and largely amusing conversation was maintained throughout. BC also entered into the spirit of geocaching and I think he found four out of our tally of six.

Much of my walking has been solo, but being with someone of like mind and constant good cheer is a great pleasure. 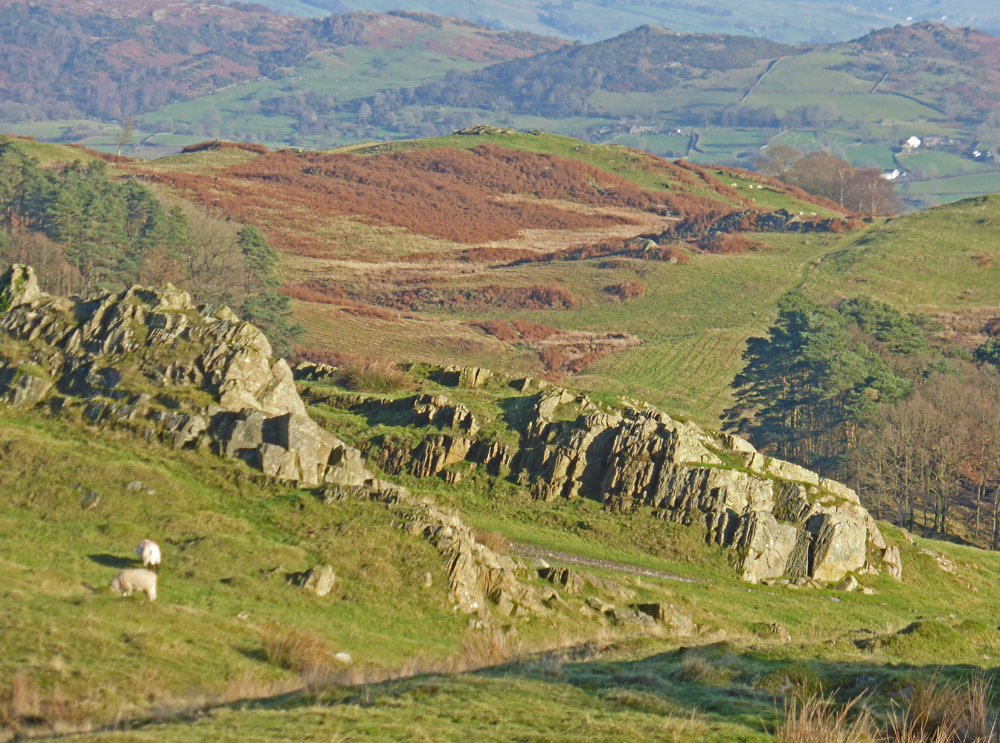 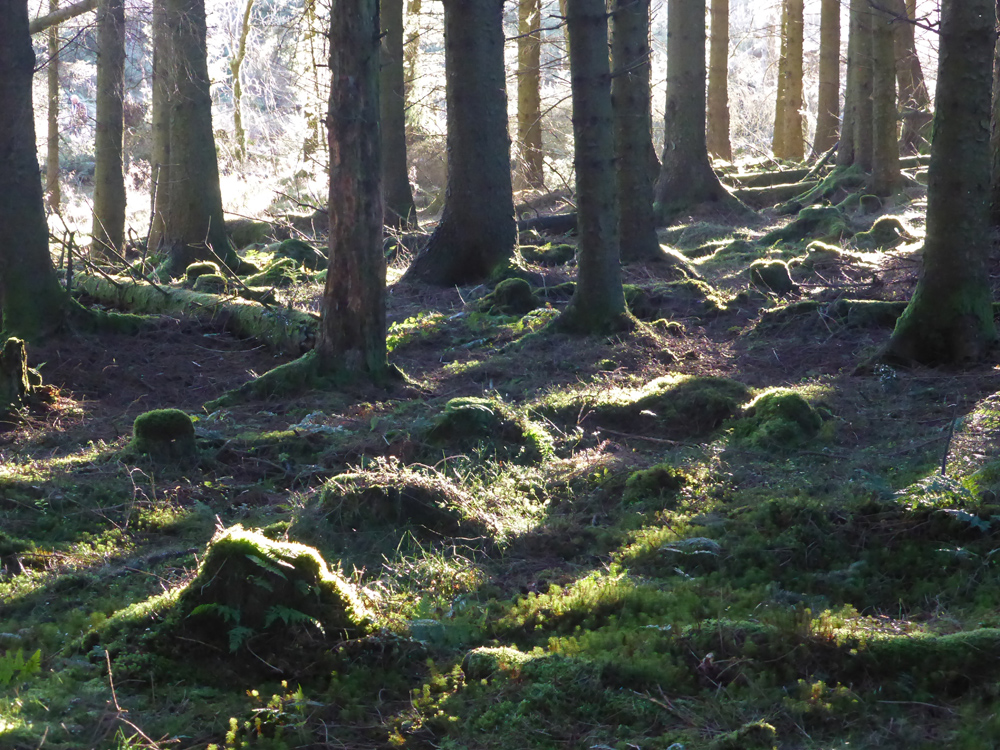 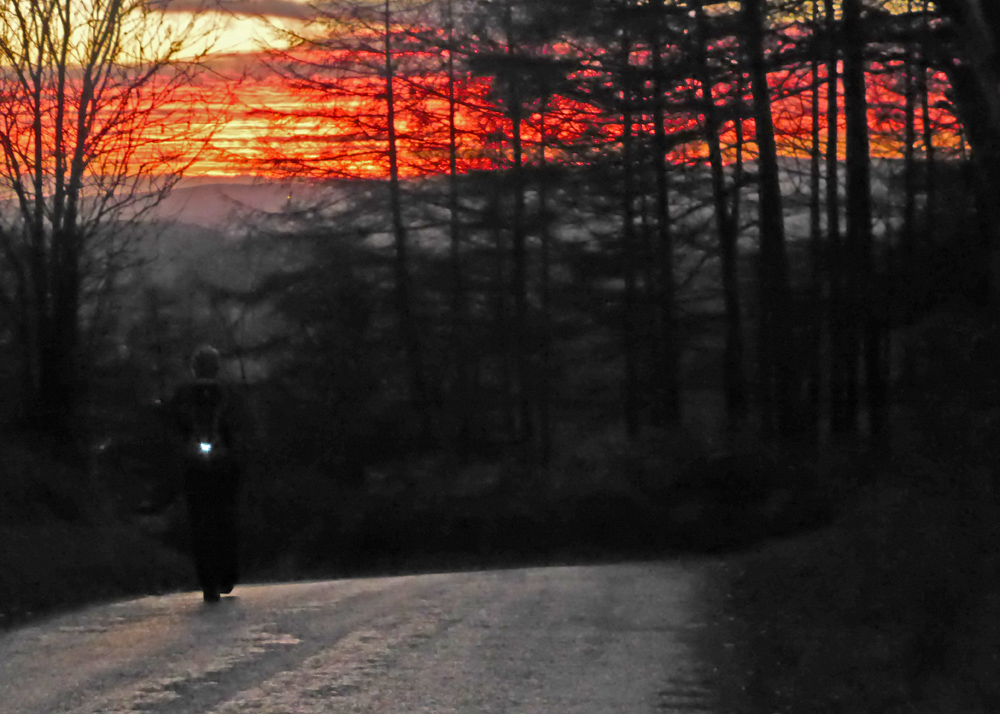