From the free car park in Gisburn a short but perilous one hundred yards up the pathless A682 took me to a tarmac farm lane.

From the farm a couple of fields on a public footpath and a short climb and I was at my first trig and then back to the car.

The Moorcock Inn south down the A682 is no longer, it has been taken over by  Hamish’s Café and Bar. I parked on the car park and wanted to ask permission but nobody was about at 9:50 am until I attracted attention and entered for the best cup of coffee I have had for a while. I had a good welcome from Fiona the new owner and daughter of late father Hamish : read all about them HERE it is all very interesting and the café is certainly worth a visit and even a diversion if not too near - long may they reign.

A link path to the cul-de-sac road leading to Weets Hill starts from Hamish's leading uphill over fields to the road. and the edge of moorland. A short trek on the Pendle Way takes one to the summit of Weets Hill.

The majority of summits have some sort of 360 degree view but Weets seemed to have something extra. I had a strong sense of being at the centre of a huge circle with  uninterrupted horizon all the way round. I was so taken with this sensation I took a full circle video - see below. There was a small commemorative plaque at the base of the trig pillar (see photo) but Internet failed to enlighten.. Twenty yards to the north a substantial bench stood above a grassy slope where  half a dozen or so stone  inscribed commemorative plaques rested where presumably ashes were deposited. I’ve not seen anything quite like that before on other summits.

Another drive and I was parking cheekily on the car park at Thornton-in-Craven golf club. A path passed by St. Mary's Church incorporating a massive cemetery. A descent into a cosy wooded  valley with an old clapper bridge over the stream followed. I was then crossing and climbing the golf course on a path shown on the map but not apparent on the ground. The path emerged onto a steep pasture and climb up to the trig.

My chair came into action again and I sat in comfort with a ham sandwich and some potatoe salad left over from the day before. ‘Twas all comfort, the chair is becoming a valued item.

It was now decision time. I had only planned to visit these three but I was well ahead of schedule so sat- nav was instructed to take me to Chipping where an isolated  trig stands to the west. It was only five minutes walk from the lane but it had to be done. I now only have six remaining. 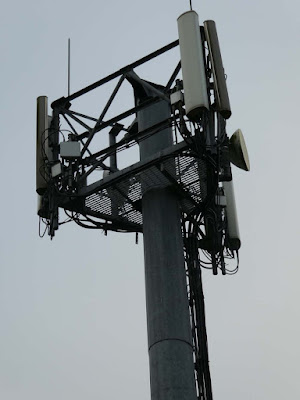 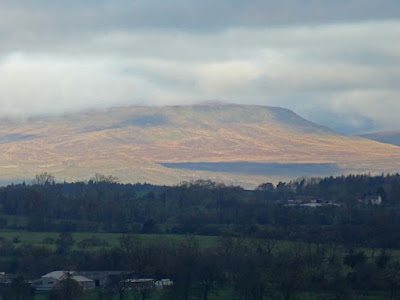 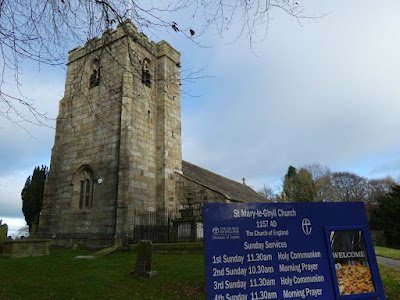 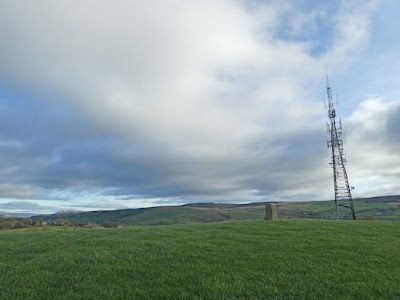 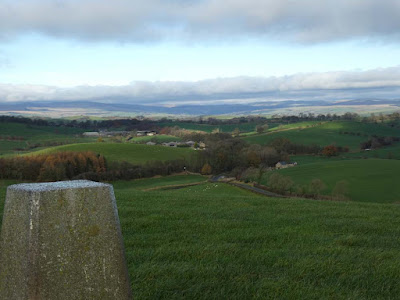 The Gloster Meteor is finished: 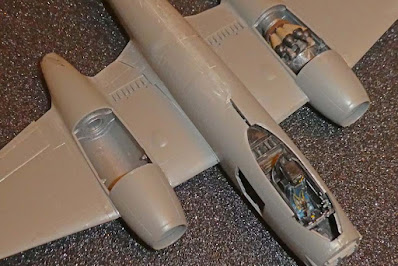 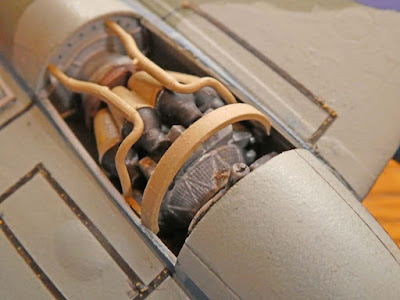 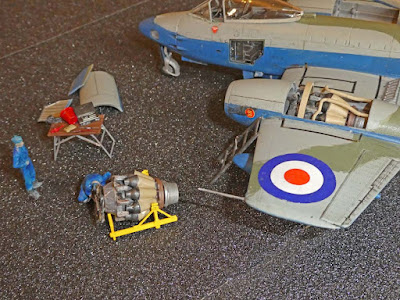 Amazon keep making recommendations for me. See below, especially : "...for indoor plants." 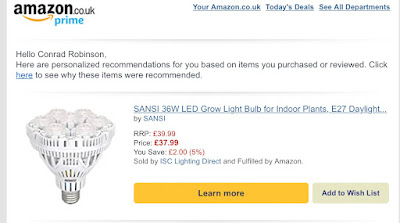 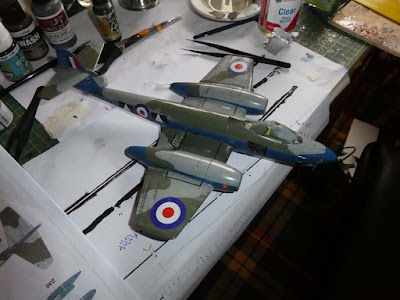 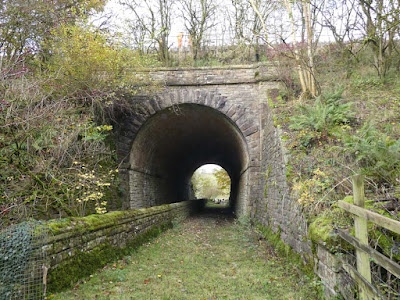 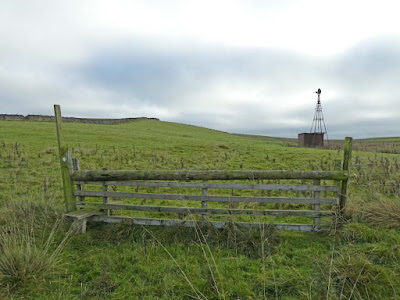 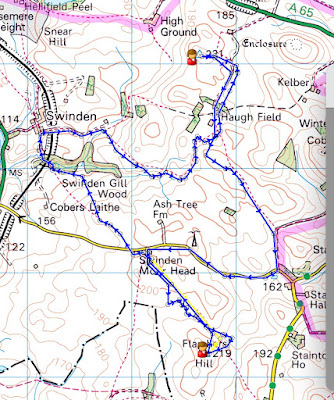 Not a good start, but worse was to come. Three miles from home in the car I realised I had left my wallet including credit cards behind. That didn't matter because I had plenty of fuel, and sandwich and coffee, and would have no need to buy anything. However it is a blow to one's pride when one messes up like that, but I managed to take control and accept this as one of life's inevitable stumbles that afflict us all from time to time.

The footpath to approach the trig close to Jeppe Knave was opposite a convenient car park on the steep road leading down into Sabden. A squelchy march and then a tough ascent on pathless tussocky hillside had me at the trig. I took three photos which I was looking forward to seeing enlarged back at home. One was first sight of the trig with half of its bright white sticking above the horizon of the hill. From the trig I got a super zoom shot of the famous multi arch railway viaduct far down in Whalley where I had walked doing catch-up on with BC on our Wainwright's Way walk . I then got a dramatic zoom to Clitheroe's cement works with its constant plume of white smoke climbing high above the brutish scar of the works below.

A strange to me word usage comes to mind if I say it "seemed rude" not to visit  Jeppe Knave's grave marked on the map a few hundred yards to the south west and there appeared to be a decent path so off I trogged.

The grave was a hole in the ground about twelve feet across on a grassy mound with a jumble of stone and boulders in the hole - Internet provides:

"According to the legend, Jeppe Curteys (Geoffrey Curtis), a highwayman was hanged for his crimes of robbery in 1327, and was subsequently buried here at this solitary spot (in a pre-Christian grave) on Wiswell Moor. "

From The Journal of Antiques where much more information is given including, fortunately for me, a photo.

I then trekked across completely pathless deep tussocky moorland climbing slightly over a shoulder then descending to pick up the lane from which I had approached the trig earlier, but quarter of a mile further west. It  was here I discovered I had lost my camera (Panasonic TZ 80, replacement cost around £300.)

I tried as accurately as possible to retrace my route back to Jeppe Knave's where I had taken photos, a distance of about one third of a mile. My camera, by logic, must have been somewhere on that stretch. Back at the grave I went backwards and forwards three times on slightly different zig-zag courses between the grave and the hill's shoulder but to no avail.

I had been keeping the camera in a vertical zip, chest pocket in my Paramo jacket. I realised I must have stuffed it back in there, but missing the pocket so the camera would eventually work its way down and drop out of the bottom of my Paramo.

This time I was not able to overcome my self-censure and annoyance and the rest of the day was ruined.

I went through the motions of visiting the other three trigs and took photos "for the record" with my iPhone. Those three were visited by driving in between and none of them were more than a mile there and back and I have no motivation for describing them in more detail other than showing on the maps below.

Various circumstances are preventing me from multi day trips which I long for. Campaigns such as this 77 trig point capture are a dilution of proper multi day walking, but I have had some grand circular walks, but driving in between and jumping out to bag a trig only a short distance from the car is yet another dilution. I am not happy. 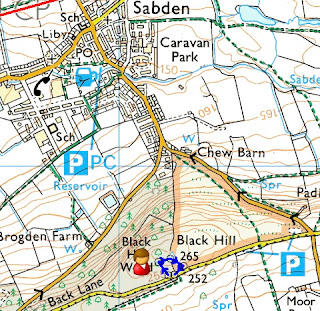 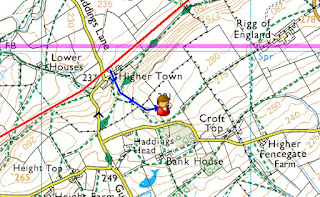 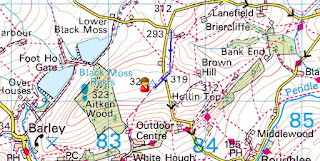 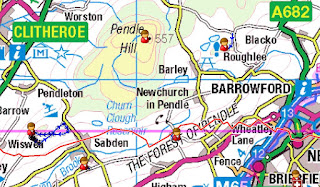