For Barrett Bonden:
Here is a pic. of a Thunderbolt for your delectation. If you can't read the script and want to please let me know and I will forward a better and larger pic by email.
Posted by Sir Hugh at Sunday, May 31, 2009 1 comment: 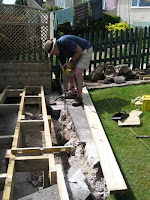 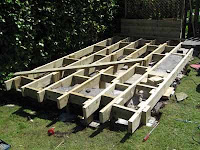 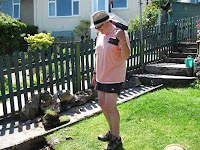 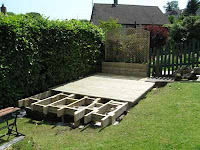 Decking has progressed over the last few, mercilessly hot days.
One of the joists needed to be located along a bulging, random limestone wall. Hire of a percussion drill (generic name) was called for. I have always known them as Kangos in a similar way that one refers to a vacuum cleaner as a Hoover. The aim was to reduce the bulging sides of the wall to a clean vertical face so the joist could fit closely to the stone capping of the wall (see the first two photos - the second pic shows the new joist and the next one in place.
There have been moments of frustration illustrated by pic number three.
Continuation of the family theme "I think you'll find better if you do it my way" has developed further into the singing of "Anything you can do I can do better".
The last picture shows the basic construction nearly complete when we packed up at about 5:00pm yesterday having run out of decking screws. I am sure this will be a great relief to our neighbours, and as today is Sunday I cannot buy more screws. My assistant High Horse has returned to Preston and will be back to school tomorrow to inflict her superiority on her pupils again.
Posted by Sir Hugh at Sunday, May 31, 2009 3 comments: 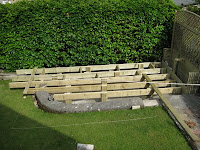 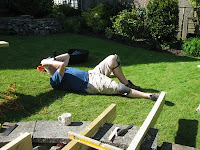 The decking project is now in full swing with the help of my assistant High Horse who is also a my first "follower".

Our family motto: "I think you'll find it better if you do it my way" tends to interrupt the smooth flow of work from time to time as has the demise of my power drill. I have two other cordless drills but they are not up to drilling into paving slabs to fix the angle brackets with the strangely named "thunder bolts".

Thunder bolts are a wonderful example of something that works well. Drill a hole of specific size relative to the size of bolt (the hole is slightly smaller than the diameter of the bolt) into concrete with a masonry drill. Insert the thunder bolt which is in fact a screw with a very broadly spaced thread, and also a hexagonal bolt head. Using a ratchet and socket the bolt threads its way into the concrete and makes a very secure fixing.
Posted by Sir Hugh at Monday, May 25, 2009 3 comments: 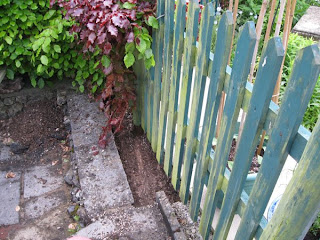 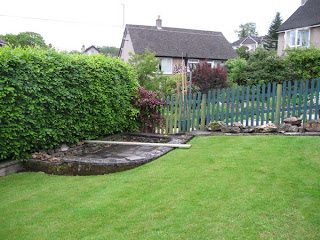 Well it hasn't taken long to diverge from the great outdoors theme.
I am awaiting the verdict of the hospital on 1st June with regards to my knee. Inactivity leads me to invent things to do and I have started on a decking project. There is a strange sort of sunken well at the bottom of my garden which has irritated me for the ten years I have lived here. I suppose it is a sort of patio area but have never been quite sure. Anyway I have decided to deck it over. The intention is to put up a trellis along the green fence for mimosa and or honeysuckle, so first I have excavated to make a trough to receive these plants. As one can see in the photo I have now hit solid concrete and I suspect this is something to do with my sewage pipes, so I do not intend to break through. I am satisfied that there will be enough depth of soil.
Further reports to follow when the rain stops.
Posted by Sir Hugh at Wednesday, May 20, 2009 3 comments: 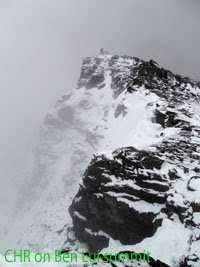 As an introduction and a starting point I will go back to 16th April 2008 when I set off and walked from Lands End to John 'o Groats in seventy seven days (no rest days).

For anybody who wants to plough through the seventy odd pages of my journal from this walk I would be happy to email this on request.

In December 2007 I had an arthroscopy on my right knee. This stood the rigours of LE/JG and on my return I went back to Scotland where I still had thirty or so Munros to complete. I had to come home early from this trip because my left knee became unbearable; I had an arthroscopy on this knee in December 2008. After careful nurturing of the supposedly mended knee I started doing modest walks in the Lake district using The Wainwrights as a sort of target and focus (I recommend Walking the Wainwrights by Stuart Marshall as a good guide for anybody wanting to undertake Wainwrights completion).

Although I have climbed many of these hills in the past I decided to start counting again from my most recent Ennerdale Horseshoe round which I think includes over a dozen - this was on 5th June 2007, and I have now climbed 59 of the 214 Wainwrights

The newly serviced knee was still niggling but did not seem to get any worse, so on 22nd of April 2009 I set off for Munro country again with my caravan having at that stage only 18 Munros to do. I stayed on The Loch Lomond Holiday Park site at Inveruglas, and below is record of my activities.

Ascent of Ben Lui and Beinn a Cleibh.

The highlight of this trip was the ascent of Ben Lui and Beinn a Cleibh. I cycled the four miles or so from Dalrigh and set off up the hill in rain with clouds down on the tops. I could just see into the lower part of Ben Lui's corrie. Halfway to the corrie a snowstorm developed giving a covering of new snow on old. I pulled out onto the ridge and met a young couple there and we proceeded together.

There is a section of about 150ft of very exposed and steep pathway on rock ledges with a grade 1 scramble halfway, and with everything covered in snow this certainly concentrated the mind. Next there was a steep twenty foot bank of snow which required step kicking to gain access to the summit plateau. The couple went off to the left to do Ben Oss and its neighbour whilst I went straight ahead to descend to a col and then climb Beinn a Cleibh.

My intended return was by the same route as the ascent but there was no way I was going to reverse that ridge in the prevailing conditions. After Beinn a Cleibh I descended back to the col and then skirted right round the lower bulk of Ben Lui to arrive at a point well below the serious ridge. It was on the descent from here that my knee became unbearably painful, and it took me quite a long time to get back to the track where I had left the bike.

The cycle ride out was magnificent - downhill nearly all the way.

After all this I had to come back home because of the knee still leaving nine Munros to do.


Having some enforced rest, and browsing about on my pc I rediscovered the blog site of a young couple I met on my Land's End to John 'o Groats walk (Mick and Gayle), and I discovered that they are seven days into the TGO (The Great Outdoors magazine Challenge). This is a challenge walk across Scotland with various optional starting and finishing points. They had started from Oban, and by coincidence they had ascended Ben Lui on 10th May and I had been there on the 2nd. I have shown a link to their blog here.
So that is an update of my recent history, and hopefully more focused blogs will now follow.
Posted by Sir Hugh at Friday, May 15, 2009 2 comments: