This campaign is now close to finish. There are only two more left. I had intended to combine this with Totridge Fell which starts  further south down the road in the Trough of Bowland.  During  a chat with Bowland Climber I stated that intention and he suggested that visiting both in one day may be on the tough side and I respect his opinion highly. So just the one today. The final trig for this campaign is on Crookrise Crag where we climbed back in the fifties and sixties long before I met BC but he also has climbed there many times over the years and we have agreed to have a nostalgia trip and visit that one together to finalise this campaign.

Weather forecasts nowadays are generally highly accurate but today I was cheated. Clearing clouds and sunshine were promised but I walked from 10:00am to 1:00pm in dismal conditions although the cloud did lift above the summit ridges. For photography these conditions are often better than bright sunshine. BC had suggested that I may carry on a few hundred yards from my turn to the west from my track for the final stretch to my trig.  That would take me to a splendid view looking steeply down into the Brennand valley and that small detour was included and most rewarding it was - see the panorama photo below.

Although the track had been good all the way to my trig I have an aversion to returning by the same route if it can be avoided. I guessed there would be some kind of path following the boundary fence to bring me back down further north up the Trough road and so it was, making for a pleasant little circular including dramatic views of the huge expanses of this Bowland wilderness. 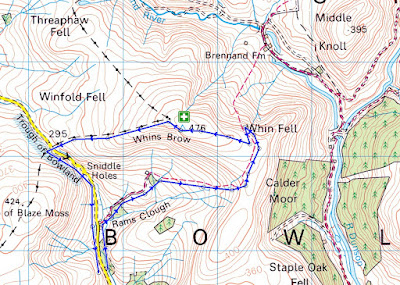 At last a walk since before Christmas.

'Twas not much fun setting off in the dark at just turned 7:00am. But eventually there was enough light to appreciate one of the most spectacular roads in England which wends its way over the fells to descend to the source of the River Hodder through wild steep hills and moorland with the road twisting, turning, descending, and with blind summits every so often, and sheep wandering and the final steep descent into Slaidburn.

Swallow Scars was about four kilometres east of Slaidburn. With the car parked in a marginal lay-by it was over a stile twenty yards up the road and half a mile of rough swampy moorland and then a left turn to climb on drier ground to the trig now visible on the skyline -  forty minutes there and back and then a drive to the west and north of Slaidburn for the next two trigs.

For Woodhouse Gate I was able to park at the entrance to a service road leading to some complex to do with the waterworks of Stocks Reservoir I think. A climb over a locked gate and a couple of hundred yards over a field brought me to a barbed wire fence with my trig only about twenty yards beyond. At first I thought I would have to settle for that. I then noticed a  place where a barbed wire support post was leaning away from the normal wire fence with the post at an angle of about 30 degrees from the ground. I was able to crawl through to get in between the barbed and the normal fence wires and then stride over. I was well pleased with that achievement.

The start for Burn Fell was only a few hundred yards drive further up the road. I had researched for parking via Google Earth which showed a wide entrance to a cattle gridded farm road. When I arrived I was not too happy about the possible positioning of my car but then a dog walker appeared and asked if I was lost. She turned out to be the farmer's wife and pleasantly gave me permission to park indicating the appropriate positioning. I could have driven back the few hundred yards to the spot for Woodhouse Gate but this was better and by the time I got back to my car four hours later I was glad I hadn't any further to walk.

Pleasant downhill on the farm road took me through the farm and then onto a short stretch of uphill field and descent to arrive at the cul-de-sac road continuing for miles as Salter Fell bridleway over the tops and down into the Lune valley. The climb up the road was long and steep and I was feeling the strain after my long lay off from walking.

At the end of the tarmac a poignant stone memorial under a wooden finger post tells of various RAF planes that crashed on the adjacent hills during WW2. My path branched  west leaving the Salter Fell bridleway. I climbed and climbed  following a trough like path with a marginal stream and stones and I alternated between the stony trough bottom and the more pleasant grassy banks on the edge above. At the wall boundary of Dunsop Head I turned south to climb up to my trig. This had been a long relentless ascent. Memory Map tells me the total ascent for the day was 961 ft. Not quite comparable with Munroing, but enough for me these days.

The descent was much quicker. Halfway back down the cul-de-sac tarmac I suffered incredibly painful cramp in my inner left thigh. After various stretching and attempts to relieve I managed to walk on only to get a similar occurrence in my right thigh. The pain was intense but I found the best relief was to continue walking and to stretch that leg as far forwards a I could with each step and after a few minutes I was free of pain. The surroundings up on Burn Fell had seemed incredibly remote and wild as I sat there in my folding chair munching my sandwich and supping my coffee.

I now have only three more of these 76 trigs left to do. Two are in the Trough of Bowland to be done together. The final trig is at Crookrise Crag, a rock climbing climbing venue of old, and I have promised to do this, as and when, as a nostalgia trip with Bowland Climber. 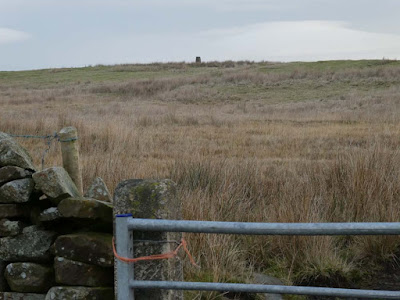 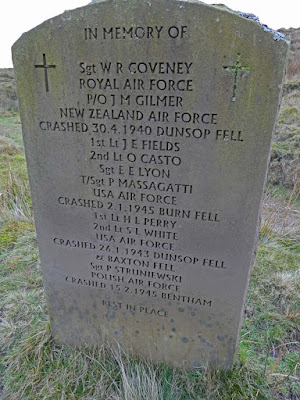 Gallimaufry (2) or back from Christmas.

My last post was on 18th December. Walking has been on hold. I have had to act as chauffeur for my son while his car has been off the road, taking him to the gym every morning. Other domestic happenings and bad weather have also curtailed my activities. Hopefully the car will be back in action by the end of this week and I hope to finish off the six remaining trig point visits on OS sheet 103 Blackburn and Burnley as soon as I can. It is roughly an hour's drive getting into that area and I like to set off early in the morning especially at this time of year.

Meanwhile sanity has been just about retained with my modelling interests. I finished the Army Land Rover Defender. Modellers have a euphemism for messing up models to make them look realistically used or aged - they call it "weathering" and I had a go at this with the Land Rover but I think I have a lot to learn.

My son was a race engineer for a Super Bike racing team for ten years and he gave me a  Ducati 916 model kit for Christmas, a bike which has his meaningful respect.  I want to make this look as much in showroom condition as possible. I am making progress with the airbrush. An airbrush is emphatically essential in this game to achieve decent results. With a nozzle aperture between 0.2mm and 0.4mm they easily clog with paint which means that paint has to be thinned to exactly the correct fluidity and after use complete dismantling and cleaning to surgical standards is required. Painting with the  airbrush is a skill that most only gradually acquire, and after about fifteen models I feel I am now getting somewhere with this.

I just noticed Burns Night is nearly upon us, celebration of which I have never partaken, however I decided to  investigate the relevant poem and came across this enchanting snippet which would have been more appropriate around Christmas time:
"The groaning trencher there ye fill,Your hurdies like a distant hill..."
The meaning is of no consequence except that it seems hurdies are buttocks.
I m expecting a comment from north of the border  (Afoot in the Hills)
Posted by Sir Hugh at Tuesday, January 11, 2022 2 comments: