The expedition moves on


Inconsistencies in statements from walkers have been commented on, contrasting preference for solitude and unpopulated areas with enthusiastic reports of obviously enjoyed meetings.

My take on this is that I would not enjoy walking in the hills with a party of several people in front, and maybe others coming on behind, or a view unfolding of my intended summit crowded with folk.

I do value solitude and wilderness for complex reasons which may be worth writing about another time, but, if I have been walking for some time in a remote area without seeing anybody, and a fellow walker appears on the scene, an exchange of conversation can be pleasurable.

Urban walking, in which I would include my current canal project, is  different.  One can’t expect to avoid encounters and I’m amused to make the best of them, stopping to actively promote conversation, often revealing unexpected anecdotes and information.

Today with Pete we headed south again, walking into low, and intensely bright autumn sun, silhouetting our views, and casting that unique golden glow of light only seen at this time of year; that combined with a sharp frost and stillness in the air combined to create ethereal scenes, and destroyed any myth that canal walking may be repetitive or boring.

At one point we came on a well used narrow boat, moored, and obviously occupied. Blue smoke drifted up from a chimney invoking thoughts of snuggling in the warmth of that boat’s interior with the cosy wood burning stove.

Two British Waterways men had an open barge further on. They were filling in holes  behind wooden planking bordering the canal to prevent erosion of the path. They pointed out that the next bridge south at Lower Burrow was the tallest on the canal, and we chatted about the skills of stonemasonry, particularly the Sedgwick Skew Bridge mentioned in my previous post. They also told us about otters they had seen at Hest Bank, one crawling under the canopy of a narrow boat; Hest Bank is a busy built up area - an unlikely venue for otters.

Just short of Galgate we attained our furthest south (not quite as heroic as Shackleton), and chatted with a lady walking her “failed guide dog” labrador.

A minor road took us halfway back before being forced to retrace steps on the canal. A hundred yards after re-passing the hole repairing men the moored, occupied narrow boat we had seen on the outward journey was sideways on across the canal.

The skipper turned out to be alone. She was  a tough looking young girl more like a farm labourer than a leisure boat owner, and this emphasised by the presence of a gnarly looking bull terrier inside the boat. When we suggested that the distant canal repair men may be coming to help she said very forcibly “I don’t think so” - we gathered they were not friends. We helped her turn the boat round and went on our way.

A local walker stopped and talked. He almost reprimanded us for not returning via Glasson Dock along a minor road and cycle track, a route I had previously planned, but aborted in view of time constraint. I have met irritating people like that before who try, in a dictatorial kind of way, to force their opinion upon you. 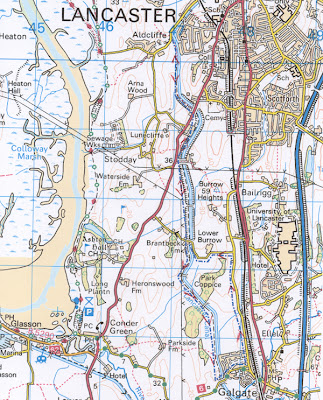 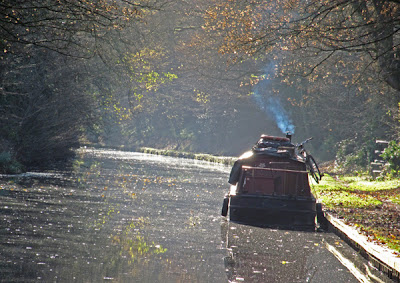 A tunnel and some fast water

On my last post I pondered what I would photograph on the next section of my Lancaster Canal walk. Well, I took 49 photos - sorry Bowland climber, but no ducks, or perhaps you've had enough of them.

I have  rationed my self to 16 pics here. 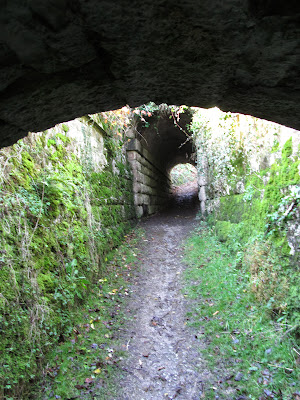 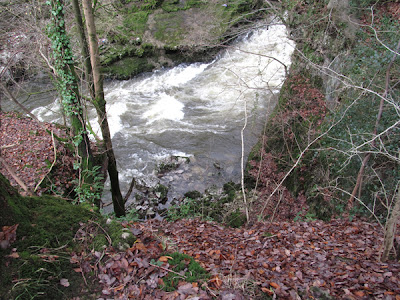 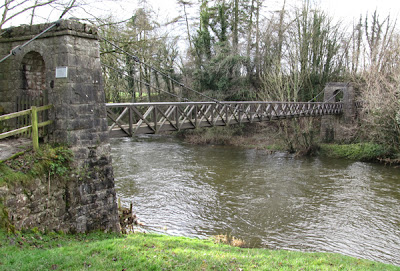 
Further exploration of the Lancaster Canal north to Kendal.


One would expect this to be a repetitious exercise having the canal as a backdrop, but there seems to be something different on each visit.

Today reflections in the water produced the most perfect, natural, mirror images I  remember anywhere. The combination of a sharp, blue sky sunny day, and no wind were the contributors.

The scenery also changed because I reached the end of the canal as a water bearing entity, after which there is a short stretch near Sellet Hall where volunteers are working on reclamation, and after that the canal has been filled in, but the footpath continues and I went as far as the underpass for the A590, and then returned by minor roads.

Memory Map Adventurer 3500 GPS. I bought this last May with the whole of the 1:50000 maps on board. It has now stopped working properly. It only runs for about an hour and a half on full charge, and then cannot be turned on. I will report progress on what reaction I get from Memory Map when I have contacted them. 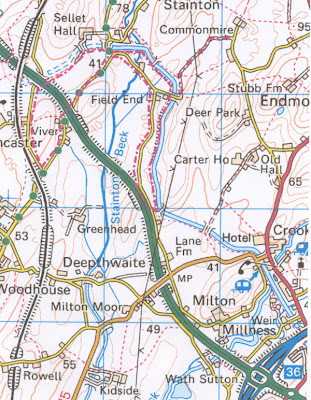 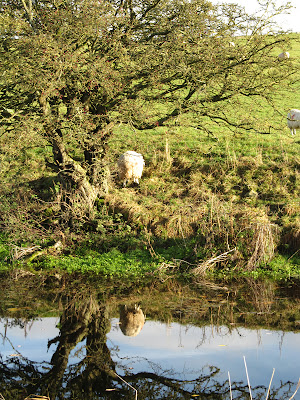 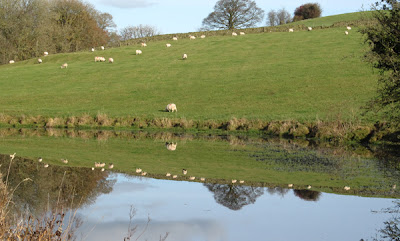 Katie was one year old on 25th October. Here are is a pic from her birthday, and a link to a video on YouTube --  http://youtu.be/-CatkBuS580 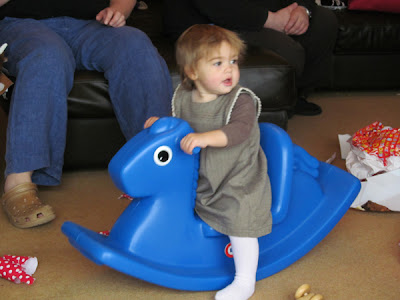 The canal campaign marches on

My exploration of the Lancaster Canal develops like a military operation - I am attacking from both ends, but this is not a pincer movement. On Thursdays I go south with Pete, and we have plenty to go at - all the way to Preston. In the north I go alone, whenever the chance occurs, but will be finished at Kendal after the next two or three outings. After that,  my one man army will move its resources to the southern end.

Yesterday (Saturday) my temporarily halted blitzkrieg was on the move again from  Farleton Fell to the Westmorland Showground.

Purply, bruised broody autumn skies released doses of localised rain when they could contain it no longer, and the canal towpath was squelchy-gloopy.

Just before the M6 Jct. 36 canal guillotine,  an unexpected view of the filling station I drive past several times a week appeared, only a few yards on the other side of the canal. When driving past the filling station the canal is invisible. I was not aware, approaching from a new direction that I was close to this landmark.  I find such unanticipated views in supposedly familiar territory pleasantly diverting.

This was the least interesting section so far, but there were items of relief: a stone building, headquarters for free canal boat trips (closed until May 2013), displaying some information about proposed reclamation of this segmented canal,  and more attractive stands of larch which relieve the debatable monotony of the canals rigid lines. I understand that larch is threatened like ash - that would be an unfortunate loss to this canal scenery.

I left the canal via an isolated bridge with no road connection and after crossing one field joined a minor road. Here I had another new discovery on my own doorstep that I was not previously aware of: The Dry Stone Walling Association Training Site. The  walling examples contain expertly constructed stiles and those square holes, for streams and maybe sheep to run through. If drystone walls excite, a visit may put you on Prozac.

Once again I was able to return by quiet country lanes and tracks.

From my previous post - the verse: "They hangs the man that steals the goose..." Research reveals this to be a 17c protest verse (anonymous), with many different versions. 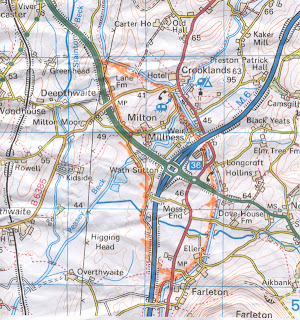 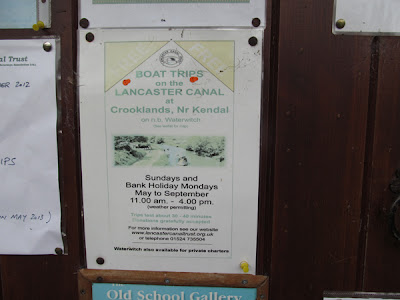 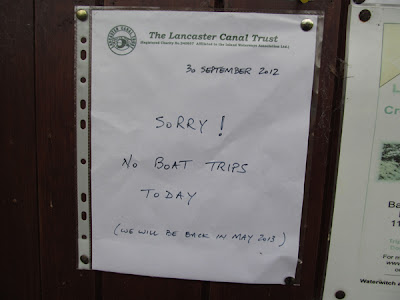 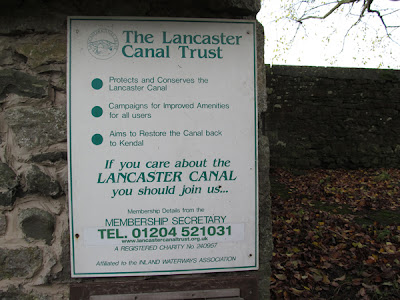 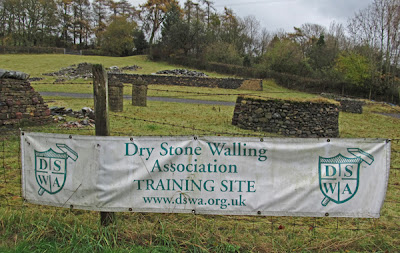 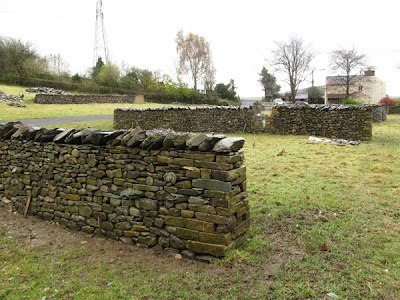 
Pete and I are currently exploring the Lancaster Canal south from Carnforth. My previous posts on the subject featured north from Carnforth. On the first trip, when we walked south to Lancaster, I had no camera. Last Thursday we continued to Aldcliffe.

We returned to Lancaster by an old railway cycle track, passing through River Lune marshland with numerous birdwatching ponds. Conversation with an avid looking birder revealed that a “ lesser yellow leg” (no further description offered), and a “wood sandpiper” had been seen, two birds, that despite more than a passing interest, I have never heard of before!

A little further on a strangely scripted sign attached to a fence seemed weirdly out of context:

I thought of fellow blogger Alan Sloman (our environment watchdog) http://alansloman.blogspot.co.uk . A copy of the pic will be going into my “Signs” folder.

The rest of the walk passed through fairly depressing, urban, semi-industrial landscape back into Lancaster. 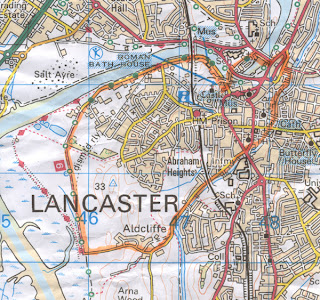 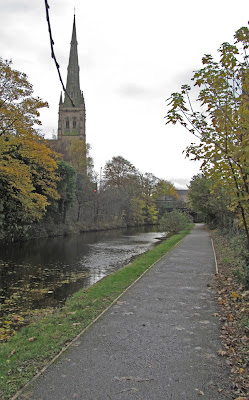 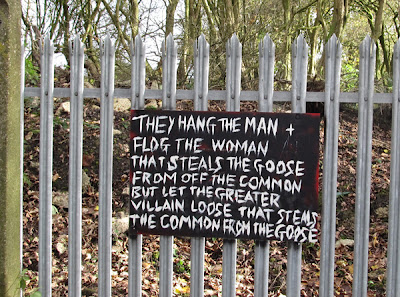