Compliments of the season

All the best to my readers, commenters and fellow bloggers. 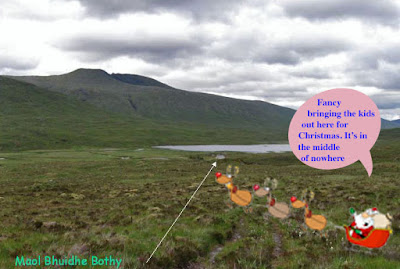 “There was a shepherd the other day up at Findon Fair who had come from the east by Lewes with sheep, and who had in his eyes that reminiscence of horizons which makes the eyes of shepherds and of mountaineers different from the eyes of other men.”
― Hilaire Belloc


Nobody has ever commented on that kind of look in my eyes, but I live in hope.

On my birthday yesterday,  I received an unusual present from son W:  a shepherd's crook. W's thinking was that I would soon progress from crutches to walking stick, but knowing me suspected I would not want to be perceived as a feeble old man needing aid. The crook would provide a clever subterfuge.

Going along with Hilaire I should now have double reason for that look in my eyes, and watch out, any of you lot organising multi-person walks (Martin?); I now have the means to round you up and keep you in check, that is when Knee 2 is back on form after being replaced a few days ago.

I had a look to see if Findon coincided with any of my walks, but sadly not, but for any of you randonneurs marching on the Monarch's Way watch out for shepherds as you sneak through that town.

Exercises are going well, but I am feeling a bit woozy in the mornings, I am still taking pills for another couple of days. I did a nuclear stockpile of food prior to hospital, and installed a new freezer under the stairs to reduce tedious trips to the garage, and that has all worked well, but my stock of tea is diminishing rapidly. I had the dressing changed on Tuesday by the practice nurse and all looks  ok there, and I have an appointment next Tuesday to have the clips removed.

Back to the crook. My Thursday walks with Pete traditionally end up in Café Ambio which is attached to the livestock mart and well frequented by our local farmers. I don't think I would have the bottle to walk in there with my shiny new crook, but it may well get its chance when I am recovered enough to make my trillionth ascent of Arnside Knott. 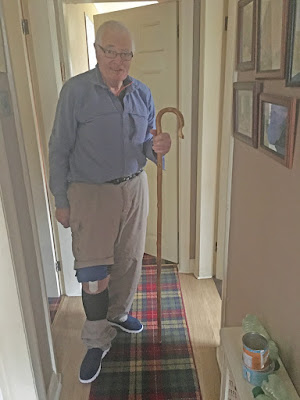 Fine prose from Hilaire - it flows with a rhythm of delight.

Lord dismiss us with thy blessing...All who here shall meet no more

Lines from the most joyous hymn which we sang as a prelude to the summer holidays at Bradford Grammar School - well I was dismissed (discharged ) from hospital yesterday equipped with boxes of pills, an ice pack thing to put in the fridge, and most useful of all, a lasso with two loops. One goes round my foot and then, to get into bed, I sit on the edge, haul Poorly Leg up, then swing the good leg up afterwards, and when getting up the good leg can go down first. This is still pretty painful, but I don't think there is any better method. I have found that in hospital we were using the wrong side of the bed, and now, at home I got son W. to shift my bed to make more room to get in from the other side, good leg first - a huge step forward.

I am walking on elbow crutches which means I can't carry much from room to room especially a tray of food from the kitchen. I have ordered a tea trolley from Amazon which should arrive tomorrow.

I have exercises to do and don't feel much like doing anything else at the moment. There is stuff scattered all over house making things untidy, and whilst I don't think I suffer from OCD I do like to keep things fairly straight and in their place,  and that all bugs me when I look round, but having a quick tidy is out of the question. Any walking about must be reserved for the priorities of eating, and toileting.
Posted by Sir Hugh at Sunday, December 03, 2017 15 comments: