Well, perhaps all those posts over the last year were my version of a Donald Crowhurst (Google, or see my post: Whither the next TGO, 6th July 2013).

Here is what I have really been up to: 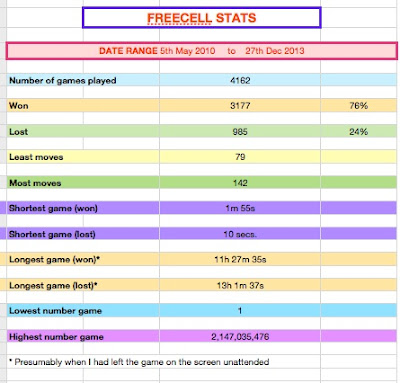 How many possible games are there?

...yes, it can get a lot more complicated than that. If you have any nerdish, or mathematical inclinations at all you would be in heaven looking at the Wikipedia entry.

Our recent Thursday walks seem to have caught something of that ethos. We have kidded ourselves about weather and reduced our six milers to a measly four. Until last Thursday we would actually not have encountered anything unpleasant with a longer walk.  Not so this last Thursday. (Ian Fleming said that "actually" was a word not in Bond's vocabulary).

We were foiled on two geocache attempts. The first where we could see the container, but an elderly woman was parked in the lay-by  smoking out of her car window, and within fifteen feet of the hiding place. On the second, although I am six feet tall, we were still sufficiently vertically challenged to reach the damn thing. People were approaching and Pete was reluctant for us to appear like a couple of drunken idiots by getting on my shoulders.

Within a hundred yards of regaining the car heavy rain started and continued with fiendish intensity for over two hours. If we had been on a six miler we would have had another three quarters of an hour of misery, and worst of all, probably not been in a fit state to visit our favourite café.

As it turned out that would not have been a problem, Café Ambio hadn’t a table available. Neither had our upmarket garden centre café. We went to Booths, bought a de-luxe Lathoms apple pie and repaired to chez moi for debriefing and another lesson for Pete on his new smartphone. Having entered a couple of destinations into the pseudo satnav app we found it impossible to delete them despite consulting various internet forums where the same problem was being aired. The only consolation is, that unless Pete decides to remove, he will now always be able to find his way "home". 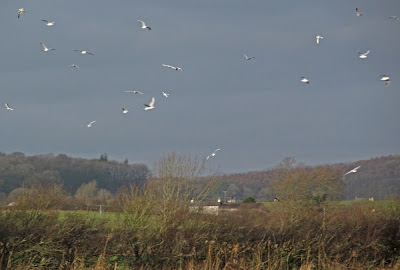 Plonker of the year award

Today I was cleaning my car. A guy pulled up on the other side of the road to visit my neighbour. The road is not wide enough for two cars so it was blocked. He folded his mirror and went to visit. Another car arrived so he had to return. He pulled his car across the top my neighbour's drive on my side of the road and asked me if he could park there. I said that was not for me to say. Thirty yards up the road, and visible from the venue of this incident, and quite obvious, it is possible to park on the side of the road with no problem.

What is wrong with people? Just for the sake of walking thirty yards. Or am I just a grumpy old man?

FATHER CHRISTMAS IS ON THE WAY

The season's greetings and best wishes to all my readers.
Thanks for your comments and I look forward to exciting projects in 2014 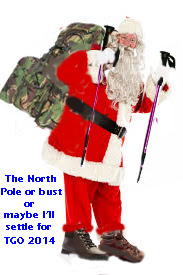 
I promised Mike M to put some of my finished Photoshop paintings on display.

Pete and I are not wimps, but last Thursday we nearly succumbed for opposite reasons.
I have a reputation amongst friends and acquaintances, (albeit those who rarely flirt with tech), for being an accomplished technocrat. The truth is that I have a love-hate relationship with gadgetry and waste endless time bumbling along trying to make things work based on a thin layer of knowledge. I often achieve the result, but in more time than NASA took to get a man on the moon, when a paid up member of Club Technocrat wouldn’t even have seen a problem.
Pete has elected to travel along the bypass of tech. When I re-met him after a forty year hiatus he usually had his mobile switched off ..."saving the battery", so I could rarely contact him. Well, we got over that  and progressed to texting  and other "advanced" functions, BUT he has now upgraded to a smartphone - oh dear!
Thursday was dreish as the Scots say. An hour or so of our walking morning was spent  at my house fiddling with the Xperia and looking glassy eyed at the on-line manual -  how much does a guy get paid for inventing those names? By then we had mastered how to make a call, but cabin fever set in,  and we deluded ourselves that dreish had gone back north over the border. We departed for two local geocaches close to Fairy Steps, a geological semi-impasse on The Limestone Link.
Pete is not a geocacher, so I was pleased when he made the first find - that helps to encourage those, who I suspect, feel a bit embarrassed and uncertain about the value of ferreting around the countryside for plastic boxes. The second geocache had a contradicting two part clue and we aborted - a dnf (did not find) will be registered, yes, geocaching is, like tech, riddled with jargon. 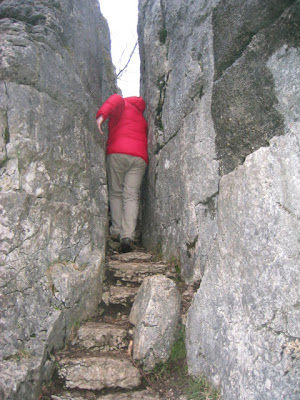 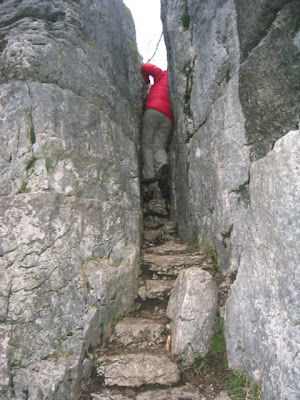 
Reasons for motivation are difficult to interpret, especially for the one who is motivated. I’ve  started  another Photoshop painting of a rusty old barn - Here is my w.i.p. 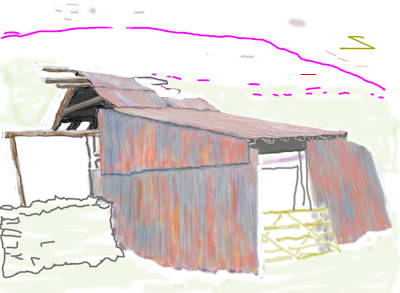 Pete and I can’t remember cancelling a Thursday walk for weather for a year or more.

Thursday 9:30 am - from my study window, howling gale and lashing rain. I reckon the cancellation phone call is imminent.

No phone call - drive to Pete’s - he gets in  - I suggest cancellation giving him easy option - he is indignant, “it’s only showers” he says. I’m caught on the hop, but  welcome the optimistic stance.

At Levens rain has stopped but wind is ferocious. We have deliberately chosen a short four miler, but apart from being shoved frequently by the wind for several yards in unplanned directions, we only experience one ten minute shower, and even then find  shelter in a barn doorway, and arrive back at the car dry again.

Coming back into Arnside we find “Road closed” notices, but the combination high tide and high wind has receded and we can drive through with only one section of flood, but Pete’s wife’s art class Christmas party has been abandoned because most people are unable to get there. 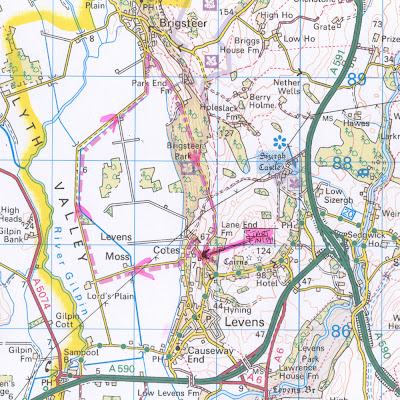