A timely reminder of WW1

A few photos from last Thursday's walk, this time with two Petes. We followed a circular road route to the north-east of Farleton Fell on narrow lanes with only the occasional tractor or car. Part of the interest and value of wandering around the countryside is finding items to research in more detail later on the Internet - see the gravestone story below. Daughter's car needed mending so I followed her to Kendal then took her to school at Barrow-in-Furness and continued dramatically over the Corney Fell road to Egremont.

The Corney Fell road is a desperate 14 kilometre single-track short-cut for those travelling south or north in west Cumbria, and at the times when it coincides with  a shift change at Sellafield,* you  drive at your peril when radio active commuters turn it into the National Park version of the 1000 mile Mille Miglia road race (now defunct, and only once one by a non-Italian, Stirling Moss). Fortunately I travelled in between shift changes both ways.

I had naively thought that the dual named Long Barrow (or Dent) would be a quick dash from Barrow. But by the time I had arrived, seen, and conquered, and returned to Barrow with only minutes to spare to pick up daughter at the pre-arranged 3:30 I realised I had been deluded. By the time I got back home to Arnside (via Kendal again) I had driven 175 miles.

When I parked for the ascent I saw a sign indicating I was embarking on part of Wainwright's Coast to Coast which I walked in April 1990, and back home my research revealed that there would have been no alternative but to follow the C-to-C over the summit of Long Barrow, but being unsure about this on the spot, and in any case relishing the thought of a walk and some fresh air I made the ascent, and whilst now I have no doubt I had been there before, I hadn't the slightest recollection of the terrain.

This was a pleasant walk through woods and then on to the open fell, but cloud was down and I saw almost nothing of the view. For those interested in what I might have seen, including apparently, the Isle of Man see Wainwright's description below which I hope you may just be able to read, but even better if you click to enlarge.

* With acknowledgement to Wikipedia, and included here for the staggering, supposed fact revealed in the final paragraph.

Sellafield is a nuclear reprocessing site, close to the village of Seascale on the coast of the Irish Sea in Cumbria, England. The site is served by Sellafield railway station. Sellafield incorporates the original nuclear reactor site at Windscale, which is currently undergoing decommissioning and dismantling, and Calder Hall, another neighbour of Windscale, which is also undergoing decommissioning and dismantling of its four nuclear power generating reactors.
The total cost of decommissioning, which will be borne by UK taxpayers, is now considered to be in excess of £100.1 bn.[1]

I log Marilyn ascents on The Harold Street Hill bagging  website. Initially I logged all my Munros, many of which also counted as Marilyns, and since all lists are interactive all my Munro Marilyns automatically appeared on the Marilyn list, and on many other lists I suspect - there are over 70 different hill lists for the UK on this site!

I am currently listed at number 81 on the All Hills list with 507 ascents. I could rise up that list by entering ascents of many other hills that I have climbed that do not qualify as Munros or Marilyns. I am listed as number 35 for Marilyns.

At the moment I am trying to complete all the Marilyns that I consider to be within reasonable driving distance from home for a day's outing. That now leaves me with only four:

There are 176 Marilyns in England (excluding Wales) and I now need 45 to complete those. Unfortunately there are a few that were missed on my south of England trip in 2013 including one at Folkestone.

On Tuesday I drove east from M6 Jct. 43 into the wilds to do Cold Fell (NY 605 556). I was taking a gamble on the weather and it remained grey low cloud all day, but no rain. From Forest Head a gradually diminishing track lead to a col then it was two kilometres of deep heather patched with soft snow pockets making for difficult going, and some clever compass work returning from the summit to get back to the faint termination of the track. On the last bearing I headed as indicated by the compass for perhaps half a kilometre then stopped to regroup and found I was exactly on the path - very satisfying. 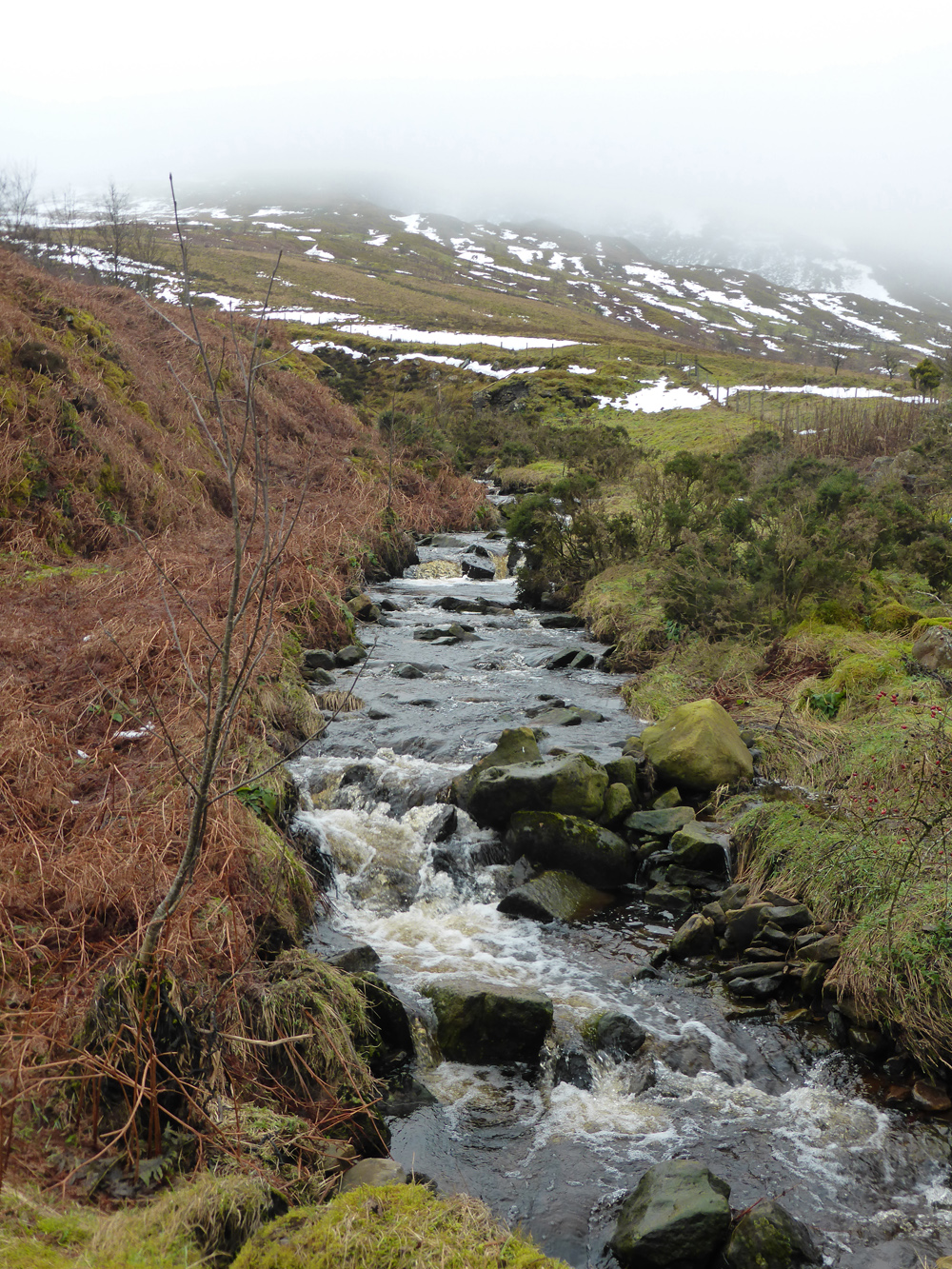 It is rare for my advice to be in demand but Gimmer was house hunting. I was invited to a viewing so I could give a second opinion.

Selfishly I looked at the location on the map and saw it was  close to one of my remaining five Marilyns in Area 35 - Dufton Pike.

The viewing was interesting  enhanced by history of previous occupants including a bishop. We were shown round by a neighbour who had been employed as a sort of housekeeper manager for over forty years by various occupants. She was our initial source of history and also reminiscences about visitors to the attached coach house which provides a self catering venue, including memories of a celebrated journalist who had been a regular visitor. After that we had tea with the eighty-six year old refined lady owner who was recovering from a knee replacement operation, and she pleasantly entertained us with further stories.

The house was superbly located and full of character. There were issues, and having known Gimmer since schooldays I gave my honest opinion.

We made a steady  ascent of Dufton Pike by the south-east ridge finishing off in a long deep snow drift to arrive at the satisfyingly pointy summit. Cloud swirled and partially cleared intermittently giving fleeting views through windows into fairyland.

Descent down the north-west ridge and back along tracks above Great Rundale Beck completed our enjoyable circle.

Back in Dufton it was four o' clockish. At the Stag Inn a dangling sign on the door said "open". We tried the door to no avail then the landlord came, opened the door, and told us rudely that they didn't open until six, and when we pointed to the sign he said he had forgotten to change it then shut the door. He hadn't bothered to alter the sign.

In contrast we drove  to Appleby and sat in the comfortable lounge of the Tufton Arms Hotel, a quintessential, old established English inn catering mainly for the wealthy sporting gentry. Tea and lemon drizzle cake in such  relaxing surroundings made us reluctant to leave. I think of myself as a "doer", but the idea of booking in there for a week and "doing" nothing seemed appealing.


I owe my success to having listened respectfully to the very best advice, and then going away and doing the exact opposite. G. K. Chesterton

Early starts are my preference for walking days. Time in hand can be crucial to cover underestimation, navigational problems (euphemism for getting lost), stopping to explore, and minimising  time spent battling oncoming bad weather, and especially in winter  avoiding the sudden onset of darkness. There are many other potential reasons for delays.

On Sunday I was away at 8:00am to drive to Keld to tick off Kisdon, one of my remaining Marilyns in Region 35. The early start was well justified.

A few Sundays ago I climbed  Rogan's Seat from Keld, The past comes back to haunt , so I was familiar with the road route branching off the A684 (Sedbergh to Leyburn)  at Appersett over the fell road to Thwaite, then over Buttertubs to Keld.

I experienced more and more snow on the fell road, until, just after the summit I met a snow plough going north, The driver was unable to proceed and had radioed for a bigger beast. I returned, precariously to the A684 and onwards to Askrigg, then off up the fell road to Muker. After a mile I met a Land Rover coming the other way and was told the road was impassable. So I returned to the back road to Castle Bolton and then north again over the fell road to Grinton and Swaledale, and then west to Muker. I had intended to walk from Keld but parked in Muker and set off from there at 11:00am. It had taken me three hours. Afterwards the return journey, north via Kirkby Stephen took 1hr. 22 mins.

An old lane led part way up the hill to the farm at Kisdon with fairly heavy snow and further tracks then to the open hillside, and it was difficult to identify anything looking like a summit on the undulating terrain. I took a compass bearing and ploughed on through snow covered heather and eventually found the summit pillar. The return back through Keld and alongside the river Swale was all delight in the afternoon sun. This was a little classic round with scenery as good as anywhere in the UK. 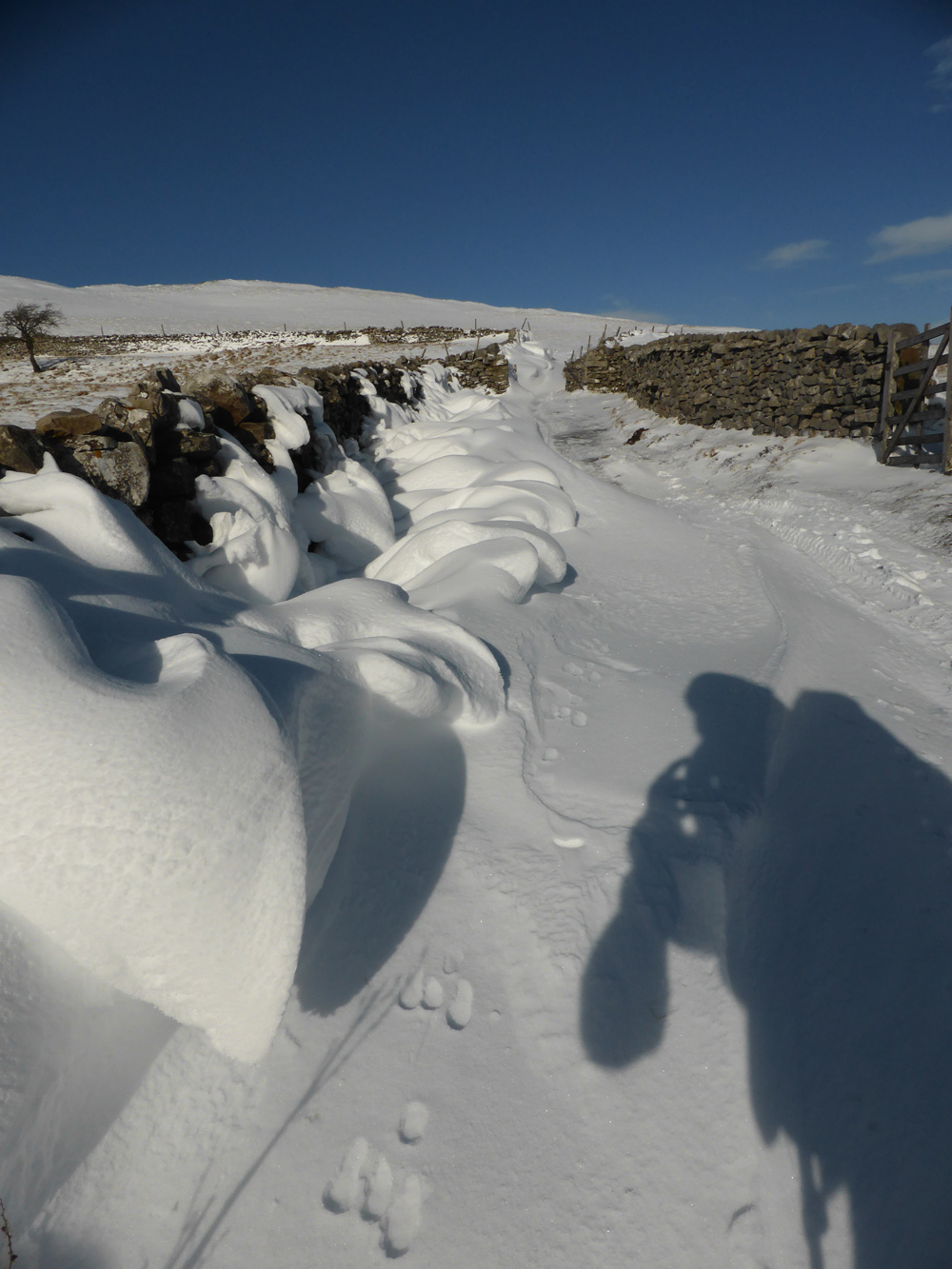