Here are a few more pics from my Newlands Horseshoe walk (subject of my last post).

Tomorrow I should have flown to Lourdes. For various reasons I cancelled this trip which has turned out to be fortuitous.
Last Friday I walked the Newlands Horseshoe in the Lake District. Two years ago I downloaded the list of 214 Wainwrights as a basis for visits to our Lakes National Park, but not from motivation to assiduously complete them. After bagging four on Friday I have now climbed forty. I know I have done more in the past, but decided only to count those I could specifically date from the time I downloaded the list.
All went well on the first half taking in Cat Bells, Maiden Moor and High Spy to arrive at Dale Head which I had previously visited on my recent Buttermere round. Dale Head is at the head of the Newlands Valley which is an aesthetically pleasing, almost unbelievably symmetrical glaciated valley which  I had  vowed to revisit when I discovered it on that Buttermere trip. 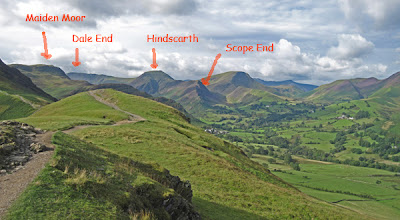 After coffee and a sandwich in a sheltered spot overlooking the aforementioned wonder on one side, and looking down to Buttermere Lake far below on the other I set off on the western side of the horseshoe to take in Hindscarth. I have been having some pain in the left knee for a couple of weeks, and this suddenly became more acute.
The descent down Scope End was steep and rocky and I was in much pain with a further four kilomteres on level tracks back to the car.
I will have to see what some rest will do, but I am glad I didn't have this problem on day one of a twelve day trip in the Pyrenees.
Posted by Sir Hugh at Sunday, August 21, 2011 4 comments: