Another fine day with BC. I had been here before years ago when I was often fell running on my own. All the way on this walk I was finding it difficult to believe that I had run round this circuit in 2 hours 18 minutes, almost exactly as on the map below, but excluding the short excursion to Wasdale Pike which we included for strategic reasons related to Wainwright's chapter that includes that summit. Our walk took over 6 hours.

Further research reveals that I did the run again ten days later with the benefit of route knowledge reducing the time to 1 hour 56 minutes.

My questioning was prompted by the roughness of the terrain, until gaining the bridleway well over halfway round, high up on the the northern side of this horseshoe.

On our walk it was excessively wet, although I did keep my feet dry throughout, and my account from July 1996 records good weather - I reckon it was probably a lot drier on that occasion.

I have no doubt BC will be posting his account at HIS BLOG so I will finish this with a copy of the diary (completely un-edited) that I was keeping back in 1996.

I have used Wainwright's Outlying Fells as a source for a number of runs, and these include Whitbarrow, and Swindale as mentioned in this diary. Just before I resumed the diary again I also did the Devoke Water run described in the book.

Wainwright says a bit tongue in cheek that he compiled the book for the geriatrics who were no longer able to handle big days on the main Lakeland Fells, and it is laced throughout with humorous comment based on this theme. Whatever Wainwright says this is an excellent volume bringing to ones attention many minor fells and valleys that are easily overlooked, but have unspoilt and uncrowded attractions.

This was the first time I have ever been into Wet Sleddale - I set off about 10:30 am from Preston and it took about 52 minutes to arrive at the small car park at the end of the Wet Sleddale reservoir. Weather was good again with sunshine breaking out and improving throughout the run.

The difficulty with all new runs of this nature is navigation. One has the inconvenience of having to carry a map, and it has to be kept handy for ease of reference, and stopping and starting all the time to do this tends to destroy the rhythm of ones running, and certainly adds a lot to the time taken. With the Wainwright runs I have photo-copied the sketch maps in his book and Selotaped them into a transparent plastic folder, and I have also tried this with photo-copies of the relevant parts of OS maps so that you do not have the inconvenience of unfolding a huge and largely irrelevant map, and finding your place on it. Both these methods are a compromise because you are left with a black and white map instead of the glorious Technicolor of the OS maps, where streams and woods and other features can be instantly identified - also the Wainwright maps are not really sufficiently accurate for good compass bearings to be taken. Having had a moan about this I must say it is all outweighed by the sense of adventure and exploration in finding new areas and routes.

I can hear the baying critics now on the assumption that once I have done a route I no longer think it necessary to take a map ! Well sometimes I do and sometimes I don't - it depends on the weather and the nature of the terrain, but at least it can be stowed away, and only needs to be consulted in emergency.

This run has a very pleasant and gentle start alongside the reservoir on a level path for half a mile or so until you peel off to the left opposite an old barn, and head straight up a steep hillside to come out on a heather Grouse moor and a line of shooting butts heading South, leading to a large corrugated iron, and rather ugly building called the Lunch House.

Half a mile upstream from the Lunch house the route goes off to the right and heads for a large cube shaped chunk of pink granite on the skyline - this is called Gray Bull and marked on the 25,000 OS map. Wainwright advises anyone over the age of 75 to regard it as unclimable - being well within the age range I felt no guilt whatsoever in clambering onto its top with the aid of tight handfuls of the bilberry thatch on its top. Any activity like this makes Barney the Springer very anxious because he cannot follow, and he stays at the bottom yelping and making a right old fuss. I descended by a vertical crack on the other side, and I was promptly attacked by the dog who by now was soaked in muddy water from his habitual wallowing in anything remotely wet, and I ended up with a fair splattering of muddy paw marks - the only defence in this situation is to set off again quickly which I did now heading for the cairn of Sleddale Pike visible to the West. All this and across to Great Saddle Crag was over fairly tough and boggy heather clad moor eventually giving way to rough grass, and all virtually pathless.

From Great Saddle Crag I contoured round the basin and headed off towards the head of Wet Sleddale via Ulthwaite Rigg and eventually picking up the old bridleway path that runs high up back down the other side of the valley. This is a delightful path which only looses height gradually maintaining good views and very pleasant going compared with the ankle twisting heather on the other side. Eventually this path veers to the south and drops down fairly steeply to Thorney Bank Farm, and just after this there is a footbridge back over the outlet stream of the Wet Sleddale reservoir. At this point I induced Barney into the stream to wash off all the mud prior to getting back in my car - later on in the day it was apparent that the water must have been very peaty because all his white bits were stained with a delicate peaty brown tinge.

The finish from here was a was a rather dreary mile of tarmac, the last half of which rises quite steeply back up to the car park, in a somewhat unwelcoming manner at this late stage of a slightly longer than average run for me.

The total distance is about 9 miles - my time was 2 hours and 18 minutes. I rated this as a quality run and would like to do it again without the navigation constraints, and see if this proves my theory about loss of time through navigation - watch this space.

The run was fairly uneventful, except that I did seem to find more hairline paths which were helpful, and this time I got onto the Mosedale bridleway much further to the West which is the correct route, so I probably covered a little more distance. The only people I saw on the whole run was a middle aged couple at the point where I joined the bridleway - this is a quiet valley, but I would have expected to see more people than that on a pleasant mid summer Saturday afternoon, but we are in the middle of the Olympics on TV so I suppose that may explain it a little. 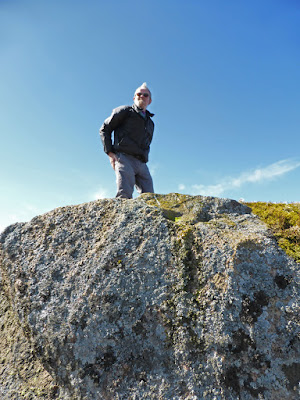 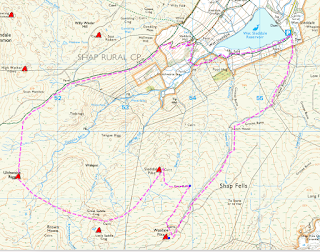 I'm well impressed with your run Sir Hugh, perhaps even more so with your account of it in your diary. Lovely.

Judging from your photographs you're getting much better weather than we are up here.

So - you beat me to the first ascent of the Gray Bull by 20 years.

afoot - I find it difficult to to believe:

a. That I did that

b. That it was twenty years ago

BC - I have the photo you took of me standing next to Gray Bull after ashamedly jibbing at climbing it, and I appear to dwarf the thing to such an extent it looks as though it would be easy just to mantle-shelf onto the top of it. What a whimp! Just for a bit of self flagellation I have decided to add the photo to the post.

It must be 20 years ago that i did a walk in that area. I didn’t run it thats for sure but i remember the old tin hut. Did you pop into the new one for a browse?

AlanR - We didn't go inside. I think it was locked up.