Two Thursday walks and an update

Unfortunately going back about ten days I received news of three deaths on three successive days. My old friend from the Bradford climbing days in the late fifties and early sixties Mike Dickson who some readers here would have known died suddenly, but I only heard about that a couple of weeks after the event. The next day Pete, another member of that  group now living in Arnside and with whom I walk on Thursdays rang me. Pete, along with another neighbour, have been looking after an aged gent across the road called Oswald and doing his weekly shop for the last couple of years or so. Pete had gone across as usual the day he rang me to find Oswald had died sitting in his chair, so Pete was involved with all the formalities that followed. The day after my son William rang me in tears to say his best friend Cookie had been found dead in Preston after coming off his mountain bike - it later transpired he had suffered a heart attack.

Also during this two week period my iPhone had stopped connecting to WiFi - it is out of guarantee and I had bought it outright. I made an appointment with the Apple shop in Manchester's Trafford Centre. They replaced the phone, like for like, free of charge, and also happily transferred the contents from old phone to new. Their contactabilty and service has hugely improved.

Back home I found my Memory Map maps (all of Great Britain OS 1:25000 and OS 1:50000) had not come across. After a short exchange with Memory Map by email I got the 1:25000 re-downloaded - Memory Map responded to my emails within an hour - another huge improvement in help and service. I had more trouble with the 1:50000 because the files were on my computer and needed transferring via iTunes, one of the most un-user-friendly software packages known to me. In order to get to the  page to show Apps and "device" i.e. the iPhone you have to click on a tiny, oblong unidentifiable icon about an eighth of an inch by a sixteenth. There is no  mention of the word Apps in any of the dropdown menus or elsewhere that I could find - it is like having a car manual that that doesn't mention oil or brakes. Somewhat to my humiliation I was pointed in the right direction by Memory Map.

Then, my oven ceased to work and on one of two Thursday walks with Pete I ordered a new one at Appliance Direct in Morecambe. I hesitated at deciding to pay £69 for it to be installed on delivery but it turned out to be the best money I've spent for a long time. The oven was supposed to slide in on rails which needed to be screwed to the insides of the units, but my space was not suitable. The fitting guy ingeniously took the legs off the old oven and fixed them on the new - it would have taken me all day to sort, if at all. We then discovered that the gap between units and an inward opening kitchen door prevented removal of the old oven. As the guy was pondering this problem I went back to some work in my garage and then shortly after I came back and he had managed to extricate the oven - how I have no idea.

I have had two short Thursday walks with Pete, about three miles each, partly due to poor weather and my on-going knee affliction which is getting worse. I have now confirmed the hospital have received my gp's referral and the appointment with the surgeon will be eight to ten weeks away. I can ring periodically to see if they have had any cancellations.

The first of the two two walks was down the prom from Morecambe to Heysham, and the second  walking north up the prom from the Battery. Here are a few photos. 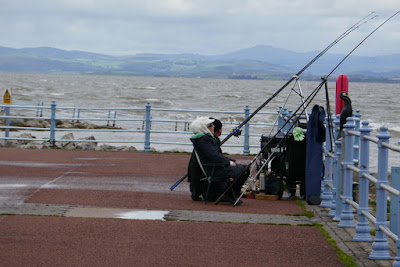