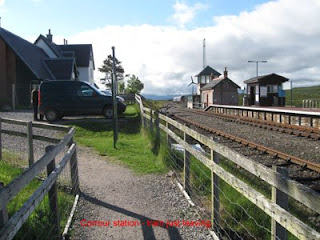 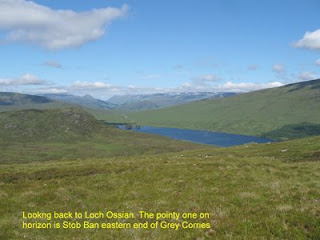 Today I was doing the remaining two Munros. On boarding the train with my bike I was told by an officious guard to go to a particular end of the train. When the ticket man came round he told me I would not be able to disembark from that end of the train at Corrour so I then had to wheel my bike down the whole length of the train (two or three carriages) with people moving dogs and themselves out of my path.
The train deposited me at 8:30am and the return train was at 3:20pm, the next one being after 9:00pm, so I was under some pressure to complete the round in time. It was hot and sunny and having to hurry promoted a good deal of perspiration. I was able to use my bike on about four km each way of pleasant Land Rover track along the shore of Loch Ossian. This was an enjoyable trip and somewhat nostalgic with views of my route on LEJOG walk last summer.
In the end I got back with forty minutes to spare.
Posted by Sir Hugh at Thursday, July 02, 2009