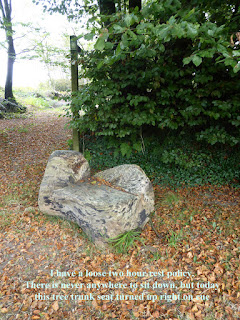 Some small thing can happen which you hardly notice, but later proves to have a profound effect, and may even be the turning point for some aspect of your behaviour.

On 19th September 2014, walking across Dartmoor and Exmoor, I stopped for a break.There was a large boulder on the roadside carved out like a seat. Well rested I continued on a track into a mature deciduous wood. A couple of hundred yards in I met the nemesis which later changed my approach to walking, I think forever. It was an innocent branch, nay, ’twas really only a large twig, let’s say eighteen inches long with a three quarter inch diameter. It caught between my two ankles causing a wound about an inch long on my shin. I stuck a plaster on and thought no more about it, and that incident, apart from the aforementioned rest, doesn’t even get a mention in my journal.

That wound took six months to heal with endless visits to my GP with specialist dressings, antibiotics, and then a recurrence of an unpleasant skin affliction on my legs, debatably cellulitis, but none of the medics were sure. I ended up at the hospital seeing the vascular consultant and was informed about the “incompetent” non-return valves in my veins necessitating me daubing my legs with an emollient daily and wearing knee high support stockings for the rest of my life.

Since then I have thankfully been able to continue with ambitious walking, but there are changes. I have lost a lot of confidence on rough ground, and balance and coordination on anything bouldery has deteriorated, and I have accepted, after perilous adventures in Torridon last summer, that such terrain is now out of bounds. But, the main point I want to make is that my more benign general walking has changed. Even on twigless Tarmac roads I am ever vigilant and looking down to ensure there is nothing I am going to trip over, and I have taken to crepe bandaging my shins to give some protection in case anything strikes. I am constantly aware that I just cannot afford to get another injury to a shin.

It may be that all this would have happened without the twig incident because of the veinous degeneration and my advancing years, but in my mind that twig was the game-changing culprit and I can’t get away from it.
Posted by Sir Hugh at Thursday, February 23, 2017