As I wrote my previous post I Googled “Crosby Garrett cafés” and at a quick glance saw three listed by Trip Advisor which surprised me a little but I was more taken up with the concept of devising a circular walk taking in Crosby G halfway to indulge in the most promising of those three facilities since I had been thwarted by Crosby Ravensworth.

Route plotted, and just before setting off I decided to run through the three cafés more carefully. Typical of Trip Advisor all three turned out to be in Kirkby Stephen miles away from Crosby G. - if you searched them for a b and b someplace they give you examples many miles away from the requested location - useless for walkers.

Along with the aforementioned Crosby Ravensworth, there are no cafés in Crosby Garrett!

But the die was now cast. The planned walk looked attractive and there was a decent forecast, so off I went to start from Soulby - also caféless.

I suspect all the above was a bit of flannel implemented by my subconscious to  disguise the fact that my true motive for the walk was to conduct further trials with the newly acquired Zantec Ultra Light Mini Folding Chair.

Whatever the motive, after parking I set off wearing a shirt and a lightweight Paramo windproof jacket in consideration of the recent warm weather. Within a hundred yards I was shivering from a wicked, piercing wind from the west. I turned back to don a fleece and some gloves which by good fortune I had in the car.

The paths following Scandal Beck made for enjoyable walking, but with a good share of stiles which I am now finding only slightly less arduous.

At the furthest south I found a pleasant spot by the stream with ford and bridge and out came the new toy. I sat comfortably having coffee from my flask and a couple of fruity bars finding I could both descend onto, and arise from the seat without difficulty. I am sure this will now be carried permanently and I would even be prepared to take on the extra bit of weight for backpacking trips. I have Googled this product again and it appears to be unavailable at the moment, but some sites say "stock arriving soon" so if anybody is interested it may become available again - be prepared for a two week delivery time.

The rest of the walk was back on tarmac through Crosby Garrett, which is attractive and worth a visit, albeit caféless. There were only two cars passing me on the road back to Soulby. Deducting the time for the coffee stop I averaged just over 2 mph which is good for me in the circumstances and has me optimistic for further steady improvement.

I placed it next to the rucksack for scale, but with it being in the foreground it appears taller than it is (actual height - 26cm.) 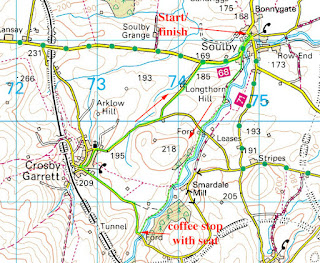