The Kendal Grufties are an enthusiastic mountain biking, adventure seeking couple I met on my recent walk in Kentmere, and they have since commented here, and in particular steered me to Finter Gill.

The gill is a savagely deep cut ravine rising up the hillside south-west from the village of Dent.

Dent is a quirky village in the Yorkshire Dales, but a village with attitude which is impressed upon your feet with discomfort as you walk the mini-cobbled narrow streets. Here was the home of the Dent Knitters, also known as The Terrible Knitters of Dent operating a thriving home knitting industry for centuries. They employed a unique method with one of the needles fixed to a belt enabling these industrious women to demonstrate, so long ago, the ladies' ability to multi-task by additionally churning butter or whatever other pursuit suited. They were often in trouble for continuing to knit during the long sermons in church.

As if that wasn't enough for Dent it was also the birthplace of Adam Sedgwick in 1785 - he advanced the study of geology, but for a man of profound intelligence he let himself down (in my opinion) by opposing Darwin’s theory of evolution, but that doesn't seem to have had a major influence on his still acclaimed standing - here is part of a letter written to Darwin after the publication of Origin of Species - Darwin had been  a pupil of Sedgwick's, and surprisingly, despite Sedgwick's opposition to The Origin they remained friends.

"If I did not think you a good tempered and truth loving man I should not tell you that... I have read your book with more pain than pleasure. Parts of it I admired greatly; parts I laughed at till my sides were almost sore; other parts I read with absolute sorrow; because I think them utterly false and grievously mischievous — You have deserted—after a start in that tram-road of all solid physical truth—the true method of induction and started up a machinery as wild I think as Bishop Wilkins's locomotive that was to sail with us to the Moon. Many of your wide conclusions are based upon assumptions which can neither be proved nor disproved. Why then express them in the language & arrangements of philosophical induction?"

The ascent of the Gill is by a steep rocky path. In recent days and weeks we have had more than our share of rain but the stream in the gill a hundred feet or more down was only a trickle. Considering the depth of the gorge and the force that must gave been required to carve it out today's lack of forceful water after so much rain was a mystery. Before the path rises above the stream there is a large  flatbed of limestone with the stream running over and a small plaque high up on a tree announcing "Dancing Flags".

Higher up there are gaunt and gnarled tees creating quite a spooky atmosphere especially in the haunted light of this dismal day. After topping out I was onto high level classic dales tracks taking me south-east with views across Dentdale where the sun was making a brave attempt to shine on the slopes of Aye Gill Pike. More track and footpaths descended to take me back to Dent. 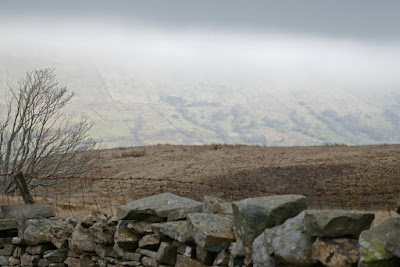 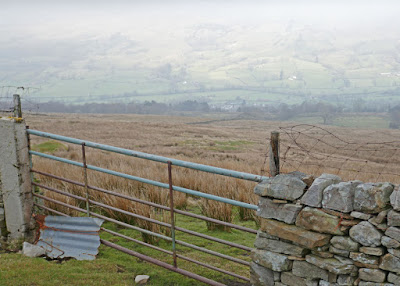