After my relatively productive two mile walk the other day I have again found material for an interesting post from  a short walk.

In the mid nineties I built two boats.  I'd enjoyed the building more than the sailing and they were both later sold. I would have taken on another project if my move to Arnside in 2000 had given me the space.  I did post (with photos) about those activities a while ago:

Shortly after starting this walk with Pete I saw a sign at Gatebeck for Fyne Boat Kits, and was surprised that I had not come across this place before. Fyne supply a big range of kits for small boats ranging from canoes and kayaks to larger sailing boats. For anybody interested HERE is a link to their website.

After Gatebeck the road climbed quite steeply in places all the way to our terminus at the Kirkby Lonsdale/Sedbergh road. Daffodils were everywhere in varying states of bloom.

Pete needs flatter terrain than this but he has been going well recently and he was fine with this steady climb and the welcome downhill all the way back.

There are thousands of properties dating back to the 17th Century and further in this area and they probably outnumber more modern dwellings and we tend to walk past and take them for granted.  There is often a date plaque above the door and I took a photo of one proclaiming 1744. That had me wondering what was happening that year and Wikipedia had many tidbits, the more interesting ones for me are shown below -  my Reader's Digest version of Wiki:

So 1744 was almost unbelievably as newsworthy as 2019 (so far), after all it isn't often that someone has declared war against us.

Shortly after the M6 underpass we were on the tops with fine views all round.

I spied a tractor related machine for our enthusiast Alan R. It may be too far removed from his specific subject of agricultural tractors, but I have hopes. It was a weird contraption designed with no eye for beauty, more as though it had been cobbled together from bits of various other machines for some unidentifiable multi-function purpose, which, judging by the look of it had failed - we will see.

Further on another ancient farm building had a plaque for 1736, but we will save perusal of happenings that year for the moment.

Back at Café Ambio I think Pete was more than usual ready for his refreshing cuppa and an Ambio sized portion of carrot cake - I usually have their own flapjack which is like something from Shackleton's survival rations, but none the worse for that. 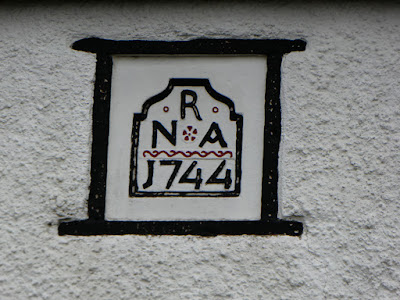 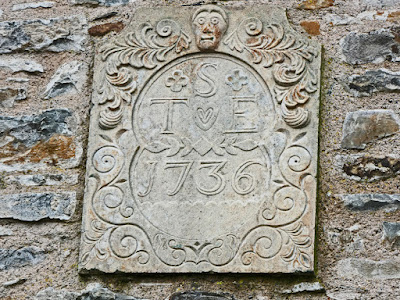