BBC's Springwatch regretted the decline in curlew numbers last night. Earlier that day I had been walking south up the Pennine Way track from Garrigill. In April 1987 I had approached from the opposite direction during my first proper backpacking trip completing the Pennine Way in twelve days. Nothing seemed familiar after thirty three years -  such thoughts were being interrupted by the varied calls of curlews wheeling and swooping not far above my head. I was not complaining, these birds are a delight to see and hear and they are an integral part of this edge of the moorland terrain ( there were still a few on the moorland  I was traversing an hour later.)

Springwatch  partly blames the decline on the modern method of cutting silage two or three times per year which doesn't give these birds time to lay, brood and then fledge the young. The old bridleway is generously wide with ample uncultivated deep grass verges on either side where I think the curlews had nested. - I guessed they had young hidden there and their calls were aimed at me as a potential predator. In April 1987 I had been more concerned with the logistics of my ambitious twenty mile a day target rather than musing on the habitat of curlews. I even had the name of the village misspelled in notes from my journal:

"From here it was a well defined track all the way to Carrigill which I knocked off fairly smartly, arriving well exhausted at The George and Dragon about 7:30 p.m. All this was not too bad because such good time had been made in the morning I was only one mile outside my twenty mile a day target."

"Two pints in the pub, then phoned home for a long chat with all the family, then to the camp site at the other end of the village, which turned out to be just a rough public field on the riverbank - nobody else there. No official drinking water so I had to use the river. This river comes direct off the hills, but had by now flowed through the village, so I took the precaution of only using boiled water here. Had a good nosh finishing in the dark - still not sleeping well."

"Whilst packing up I met a lady with dog who was a personal friend of Tom Stevenson, one of the founders of The Pennine Way."

Higher up the track had been re-surfaced with bright yellowish new stone which seemed to clash with this ancient  bridleway.

When the boundary wall finished I took a beeline across heather moorland for Rotherhope Fell trig point. The going was rough with peat hags again. About a kilometre from the trig I crossed a  plastic terrain matting track and noted this for my return. The trig is perched,  wild, isolated and silent with an ambiance of space and freedom - views across wilderness in all directions - were those some old lead working ruins nestling in a deep cut valley far below? It was all breathtaking and worth  the effort of my toils across the rough moorland.

I was able to pick up the plastic track on the return  All the moorland I have walked across in the last few years has had new Land Rover tracks carved out, often  highly visible  from miles away, and now this plastic stuff is  prevalent, but at least it is not as highly visible as the stony tracks. I was back on the Pennine  Way track much sooner, but now further south than where I had veered off on the outward journey. At the side of the track there was s mini quarry, now with two ponds of water, this apparently the source of the new yellow stone excavated to "enhance" the grouse shooter's road.

Variation is a feature of trigpointing.  I had planned to visit the next two most northerly on my OS Sheet 91 on the way home - they were both only a couple of hundred yards from where I could park the car. At Maughanby Farm a public minor road ennded at the farmyard with various other buildings scattered. A gent working on one of thr houses assured me I could go and find my trig which was only s couple of hundred yards along a track. At first all I could find was a pile of stones from a tumble down old wall surrounded by trees and undergrowth. I felt much disappointed concluding that this must be one of those trigs  that had been removed. I walked round the back and then saw the trig almost covered in shrubbery and long grass - my mood lightened. Then I looked up and saw a perfectly framed view of Blencathra, my favourite Lake District  hill. The resulting zoom photo later showed this off well, although the first non-zoom effort failed to capture any existence whatsoever of the hill on the horizon despite my efforts  with Photoshop.

I drove to Jardine's Farm where the next trig was only about two hundred yards from the farmhouse  I went to ask permission but there was nobody about, and as this is obviously  private land within full view of the farm I left this one for another day. 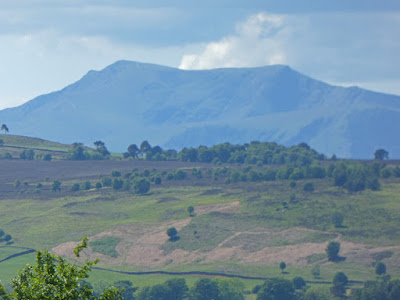 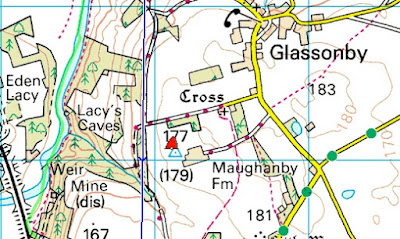