I had persuaded Bowland Climber to accompany me on what some may see as a pointless exercise in bagging all the trig points on OS sheet 103.

The start was in a village with no name but with the substantial Immanuel church. and a large free carpark next door. We were the only two cars using this and so it was on our return several hours later.

A path lead down to a huge graveyard. Here a volunteer chap was mowing the grass. We chatted and he was keen to have us go and visit a nature reserve and waterfall just off our route. If we had let him go on I think he would have re-organised he whole of our walk - I have often met such folk who can be quite insistent on persuading you to follow variations and attractions on or off your route. He indicated a large patch that was marginally less mowed with the observation "I'm leaving that till later, they'll be dropping a few in there next week," a turn of phrase that amused me despite its sombre allusion.

Within another hundred yards we had managed to turn the wrong way on a track, but that was soon rectified. We then found the entrance to the nature reserve where Graveyard Man had informed us of the lake and waterfall. We found the waterfall, but despite assurances there was a path round the bottom of the lake to get us back onto our route we ended up in thick wooded terrain with bramble underfoot  before emerging onto a proper path.

Navigation was tricky amongst a network of paths and tracks leading through various farms. At one of these the owner was sunbathing on her lawn and offered direction - "You go up there to those trees" - the whole of visible land ahead was covered with trees, but with our vast experience we found our way through.

Just before climbing up to the road at Mattbridge there was a pretty house by a stream. In an adjacent field we spotted an object like a squat trig pillar with a plaque. We couldn't approach because of fencing, Internet search gave the place the local name of Cock-o-Lumb where in times gone by there was a tea shop and a popular picnic venue, but now, according to an Accrington community website, visitors are not welcomed. At the top of the lane a sign indicated this as Benjamin row, Ramsclough Lane. We were both much intrigued as to the purpose of the monument or memorial and any information would be welcome.

Our first trig was visited after a  short diversion from the hazardous  B6236.

We passed along the top side of Accrington golf course with no players visible on this idyllic sunny day. Or next trig point was in a field surrounded by barbed wire fencing and we diverted up a lane to approach from another path and more barbed wire. Just as we saw the trig ahead, thinking we had overcome all barriers we saw that the trig itself had been surrounded by yet another fence encircling a mini mountain of manure.

Pleasant walking took us back to our cars. A short drive to park on a road a mile away gave us access to an unfenced footpath from which a two hundred yards diversion would take us to the trig which was plainly visible. Two thirds of the way to the trig we were stopped by angry shouts from  the gate at the road. We were of course off the footpath and in the wrong. We were told we could not go to the trig so we went back to the gate. Tempers subsided and then BC found that the farmer had many associations with Longridge where BC has lived for over forty years and a lengthy reminisce followed naming most of the population of Longridge known to BC and the farmer, and so it was that we were then granted permission to return and bag our third trig of the day. 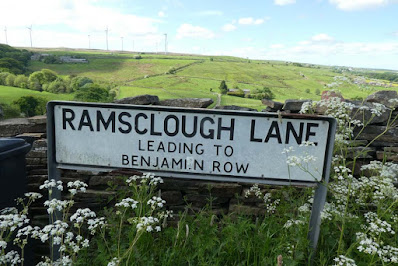 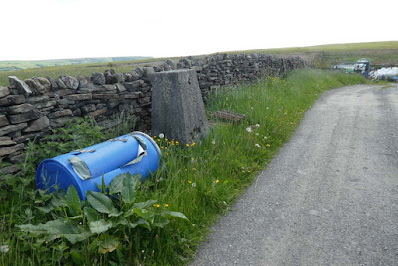 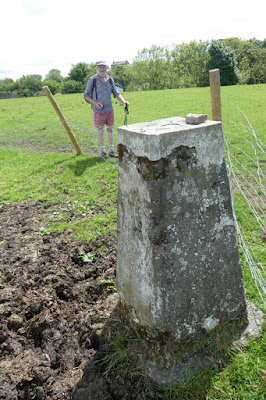