Murray Walker has given me inspiration. No, not as an F1 commentator, although that may well be so. When Murray died much was published and his image for me was enhanced further. Murray did his bit during WW2 volunteering in 1942 at the age of 18 for officer training to become a tank commander with the Royal Scots Greys. Murray landed in France the day after D Day and took his Sherman  tank  through the final push into Germany. He was later promoted to admin jobs and left the army in 1947 as a captain.

I have made several plastic kit models since I  posted in August but my skills seemed to deteriorate after that and I would not want to show those efforts in detail. but I am reasonably satisfied with my latest effort, inspired by Murray and his Sherman Easy Eight tank. These came from USA when the Americans entered the war and supplied us under the Lend Lease scheme and they were the mainstay tank for the Allied forces from then onwards.

WORTH CLICKING PHOTOS TO ENLARGE (I THINK) 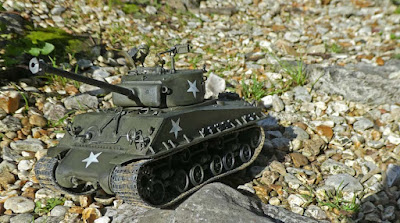 From the On Line Tank Museum  - CLICK TO VIEW
The M4 Sherman (named after the famous American Civil War general William T. Sherman) is one of the few really iconic fighting vehicles of the Allies during World War Two, and one of the most famous tanks in history. But while this historic status was gained partly thanks to its intrinsic qualities, but also due to the sheer numbers in which they were provided, only surpassed by the Soviet Union’s T-34, with a staggering 50,000 total delivered. It remains by far the most widely used tank on the Allied side during the war. It was derived into countless derivatives and had a very long postwar career which lasted well into the Cold War. It has been largely compared to the T-34, and had the occasion to confront some during the Korean War.
Posted by Sir Hugh at Monday, October 18, 2021