These four trigs seemed to emphasise and bring into focus the huge width of the Ribble Valley along with the great expanses of wild moorland to the north-west and south-east of Clitheroe. This is not so apparent when you drive through the more urbanised road routes in the valley.

The first two trigs lay only a few minutes walk from the car. The final two I had intended as a linear there and back but that plan changed.

For Dockber I parked in an unpleasant lay-by, apparently part of the old road with access at both ends but sheltered by trees from the busy A59. I reckoned it was just the sort of place you might find a body. The trig was only about two hundred yards from the road but access barred by a substantial hedge. A few perilous hundred yards down the verge as cars whizzed past in excess of 80mph road lead to  a public footpath. As I approached, watched with much curiosity by a large herd of sheep, I thought I should be able to see the trig. It was only when I was within ten yards with GPS telling me I was all but on the spot I saw the trig lying unhappily on its side. I wonder why? As I walked back I could see the expanse of the Ribble valley below.

Mason House was reached through a gate on the minor road near Bashall Eaves. I'm not sure if the little field was private but it seemed to be tended as spot to sit on a remembrance bench and muse. The trig was within two feet on the other side of a barbed wire fence but I was able to make human contact. The backdrop  was provided by one of BC's oft mentioned hills.

A short drive took me to Spire and my intended linear there and back to Waddington Fell. Spire trig was visible at thirty yards from the car. A few hundred yards further on a curious house named Spire on the map nestles in trees. It has an unusual sort of triple chimney construction. I have done an Internet search but found nothing.

The map shows a path all the way to Waddington Fell but not designated as a public footpath. The going was horrendous. Reeds, tussock grass, bogs, and at one point I took about twenty minutes to get through fifty yards of chest high dead bracken downhill.  To start with I was following a walled field boundary but then off into wild moorland with only the occasional faint trace of a trod. The going was heavy. A barbed wire fence was straddled after twisting the barbs back under the plain wire. A wall, part tumbled down was surmounted with difficulty and ingenuity by using my extended walking pole to push the barbed wire away from the wall so I could get down in between. I then realised I had left my other pole behind. I spent another five minutes enticing it at arms length with the wire stretching pole until I could hook its loop and recover. I think if I'd had  to get back over that wall I would still be there. This was was one of those days when distance was irrelevant, the overriding factor being the hard going. I watched Sully the other night (landing of the air liner on the Hudson River) and was constantly reminded of the warning issued by the flight simulator saying "terrain,terrain!"

When I arrived at Waddington Fell trig I knew there was no way I was going back the same way.

I had identified a return route to the south involving road walking and footpaths but it was nearly six miles more. I looked good and hard at the map and realised I could return by a shorter route on more amenable tracks and roads to the north, but even that involved a further half hour downhill trek over more pathless moorland before getting onto the easier part.

The final walk out by the road ended with a dispiriting steep ascent to get back to my starting point. I was well tired. According to Memory Map I had covered only 7.74 miles in 6.4 hours with only a stop of about ten minutes for sandwich and coffee. 'Twas an average speed of 1.16 mph, but with ascent of 1358feet. As I said it's the going that matters, not the distance. 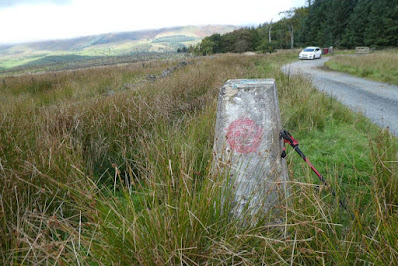 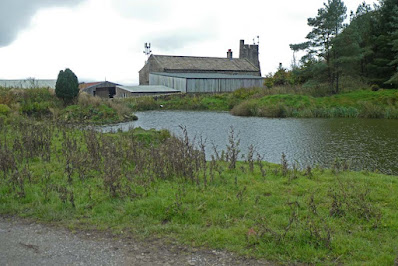 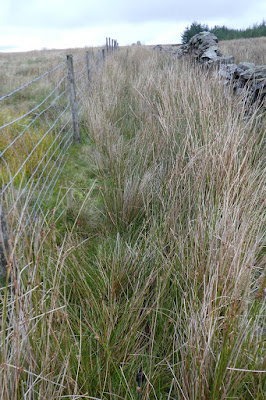 *Beating the Bounds - have a look:   Click to see his blog. 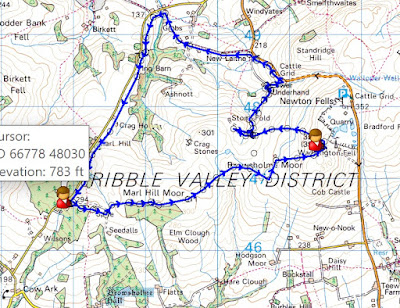 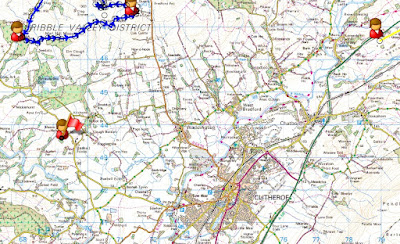