Lowgill and the Lune valley

From Lowgill south of Tebay

I tried to buy a pasty from the bakery on the front but they hadn't come out of the oven. Across the road on our splendid pier I saw about fifty folk assembled along its whole length and out onto the road all with mountain bikes. Some sort of event, but exactly what I couldn't imagine considering the nature of our region.

A mile out of the village the whole of the sea front at Sandside was occupied by a line of cars that had obviously been supervised to park nose to nail to maximise the number to be squeezed in. I don't think most of them could have extricated if they had wanted. When I returned later in the afternoon the cars were still there and also again today (Saturday) as I motored back into Arnside again about 1:00 p.m. No sign of any cyclists, and I also wondered where everybody had been able to overnight.

Later I learnt that I had missed the hottest day of the year so far. Up on the edge of the Howgills it was chilly and overcast until mid afternoon.

I parked in the shadow of Lowgill Viaduct (1860.) The line ran from Ingleton via  Kirkby Lonsdale to Sedbergh and then only to Lowgill. It had been intended as the main line north but disputes and politics sealed its fate as today's line was alternatively established. The Low Gill line is now defunct. plus ça change !

After leaving tarmac I crossed the bridge of an unnamed tributary to the River Lune and it was joined by two others at exactly the same spot, an unusual occurrence for three streams together like that.

Climbing steeply up old packhorse lanes I wondered about the travails of the olden day merchants and travellers. Topping out at High House Farm there were good views back down to the Lune Valley and my car a distant white speck. More climbing fpllowed over friendly sheep fields and  stiles to top out on a road now with renewed views back down to the River Line and my return along its banks.

As I was plodding up to the top of that road I met my first person of the day, a runner coming towards me and we both "helloed" as we passed each other. My brother RR who comments here (see his last comment on my previous post to this one) raised a point about the etiquette of meeting others along the way. I wrote my reply but felt it would be better aired here in a post rather than in comments where it is less likely to be seen.

I am not aware of any formal etiquette in those circumstances. I always say "hello" or "hi" to others approaching when in the countryside where such occurrences are usually infrequent and even in villages where meetings are still well spaced out. Conversation beyond that sometimes ensues especially when I recognise the other as someone embarked on the challenge of waking rather than a casual stroller, but I am aware that this can be unsound presumption because if you take the trouble to promote talk you nearly always find that others have something of interest to pass on. Taking that trouble is something I consciously try to develop given half a chance. If the other has a dog that can often lead to more conversation with relevant comments creating an opening to wider ranging chat.

When I throw out a greeting and get no response which does happen now and again I do have a wounded feeling of rebuff mixed with annoyance, so you may bear that in mind with your own encounters unless you delight in pointlessly rebuffing fellow humans.

All this reminds me of a French kind of etiquette: occasions when I have found myself slogging steeply up a road with a heavy pack sweating profusely under merciless Gallic sun and being hailed by the passenger of a passing motorist leaning from the window shouting "Courage!" I was never sure whether that was genuine encouragement, humour, or sarcasm, but prefer to believe it was the first of those.

Back at home a couple of days ago I was walking one of our woodland paths. A woman with a dog was approaching. The dog, a large rough haired mongrel, came tearing up to me barking viciously and continuing aggressively barking at my ankles just short of inflicting injury, but I was not to know if that would happen and I was scared; unfortunately I was not carrying my walking poles. The woman tried to get control and hauled the dog off whilst I was vociferously making my feelings known using language unbecoming of a retired bank employee. "It's because you're a man" was her riposte as she hurried off, keen to get away from her negligent and irresponsible actions, and I was shouting after her "so, am I expected to turn into a woman?" Pretty topical eh?

Back to my walk. I descended on an old track through more sheep pasture and through a farm, over the aforementioned dismantled railway and down to the footbridge over the river Lune.

The previous bridge was destroyed by Storm Demond in 2015. The bridge was renewed and reopened in 2018, but later that year it was damaged again  The bridge was craned off and repaired in the adjacent field and then craned back on again. There is a really interesting post on the Walkers are Welcome web site with much more detail - well worth a read. CLICK HERE

I walked back along the river mainly on  the Dalesway footpath which I have often declared as one of the top long distance walks in England. This section didn't disappoint

At one point the way was blocked by huge fallen trees across a steep slope. I ended up bum sliding, removing rucksack and crawling under - it was not easy. A good walk that bodes well for others from this guide 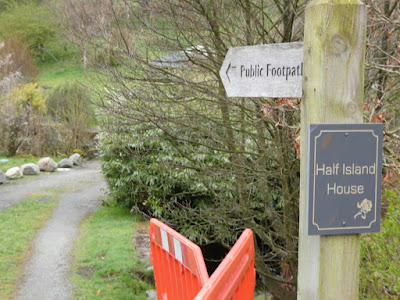 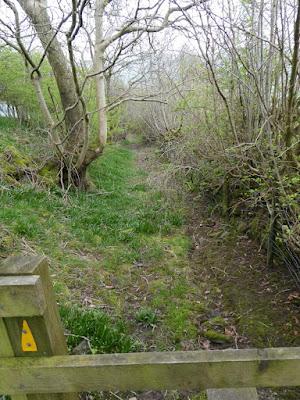 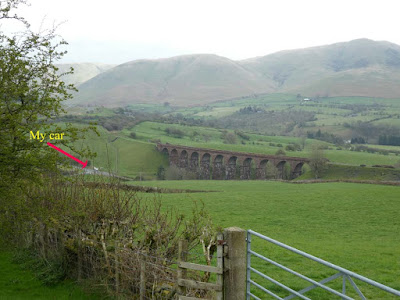 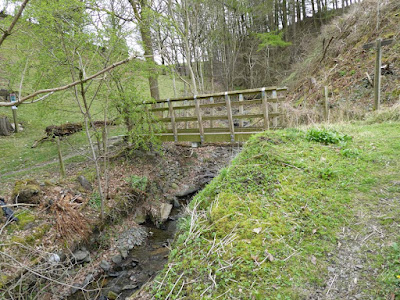 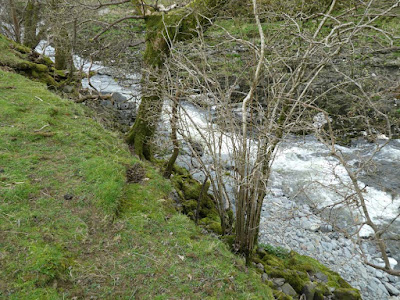