Walk No. 1 from: The Lune Valley and Howgills, Dennis and Jan Kelsall. Cicerone Press.

A tough little walk for me, eight miles and 1695ft. of ascent, but it was oh so good to get back on some hills again.

"Twas easy walking as far as Weasedale but then out onto the uncultivated grassy upland and a relentless five kilometre climb much of it on steep ground. I say relentless but from the spot height at 586m, just as one thinks Randygill Top is only now a short distance away one drops very steeply about 100m. to Leathgill Bridge (actually a natural land feature) followed by its corresponding climb out on the other side to gain Randygill summit. If I had looked carefully at the map contours I would have been prepared for this sting in the tail.

From that spot height I thought I could see figures on Randygill summit and I took a zoom shot. When I arrived there was a small orange tent, a radio aerial and a guy with a large, even for its breed, Alsatian dog. The dog saw me and started to bark with savagery but happily for me the guy had hold. However that dog was obviously very strong and its owner was struggling to retain it and I could see a  possibility of him loosing control. If that had happened I believe seriously that I would now be dead. I couldn't go to the summit cairn snd turned to pick up the track to Green Bell taking a quick zoom shot back to the summit, the dog, and its owner.

Further down the path a runner came up behind. I had noticed little blue flags marking the path. I was informed that I was on the route used by the SAS as a selection tool for applicants to weed out wanna-bees that would not be up to the mark.

I gleaned more from the marshal on Green Bell. The course is a strenuous fifteen mile trek over these Howgills with a full Bergen rucksack. The guy on Randygill was marshalling a checkpoint. TToday was the annual event open to all,  some training to do the selection course for real, and any members of the public who want to have a go either running or walking unencumbered with the rucksack.   Today there were fifty entries and they kept passing me from time to time until I veered from their route well down the other side of Green Bell.

A bonus for the walk described in the book was a short diversion to view the source of the River Lune. I have previously been disappointed on similar searches finding nothing much to pinpoint the exact location amongst a mush of peaty ground, but this one didn't disappoint with its well defined spring and a half decent trickle of water and a well defined streamlet leading off to turn west alongside the A 685 and now named River Lune.The first section is named on the map as Dale Gill and this leads into Greenside Beck, but it is quite obvious the these two form the proper origination for the River Lune. I gained a sort of smug satisfaction from this little visit. 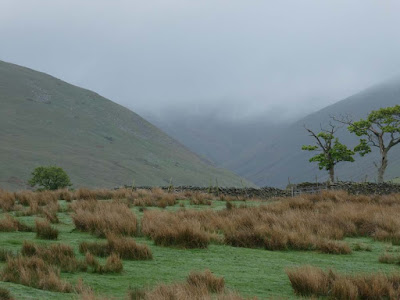