There is a large lay-by on the single track road near Baines Crag. This was a bank holiday so we met at 9:30. There was one other car and another rolled up before we set off. Surprisingly there were only twelve in total when we returned six hours later.

I have had several outings in Littledale before. The terrain is similar to our recent walk in the Hindburn valley with heavily wooded, steep sided valleys and cropped turf and old tracks above,  giving extensive views. Looking down at the wooded valleys with their offshoots gives an air of mystery and secretiveness and there is a real feeling of exploration and possible tempting alternatives for other days.

We passed the abandoned church in Littledale, deconsecrated, stripped out and used as a barn for the nearby Littledale Hall estate.

From the Internet I gleaned that Littledale Hall was built in 1849 for Revd. John Dodson. He had been vicar of Cockerham but seceded from the Established Church because of the Gorham Judgement and retired with his family to Littledale.

Further research informed me that the Gorham Judgement arose from a bishop refusing to appoint a vicar in 1850 who argued that baptism was not "sacramentally effective" and that to "accept Jesus" required an adult decision. That apparently clashed with The Thirty Nine Articles of the Anglican High Church.

I've always thought that dunking babies, thereby having them traumatised and screaming, was not a kind thing to do, but then I would never have been a vicar having to make a decision on that matter of principle, but I reckon one should have the choice whether to "accept Jesus" or not rather than having it forced upon one at birth. The church hierarchy seem to thrive on creating these kinds of arguments and dissensions.

Littledale Hall is now a residential rehab centre for people with drug problems. There is a website giving details but strangely there is nothing about the principals who run this establishment - no names or company details at all. I presume this is a private enterprise that receives candidates mainly sent by and paid for by local authorities?

Beyond the hall Ordnance Survey said we were still on the public footpath but we were battling through waist high bracken until we discovered a substantial farm track a little higher up.

We walked as far as we could to get a view of the upper section of Littledale and were able to see where we had crossed higher up when we were walking the Lancashire Witches Walk in 2016. We then backtracked to pass through the buildings of Littledale Hall and eventually climbed up onto the edge of the Clougha Pike moorland. For me the track through the heather just coming into bloom was the highlight of this walk. I had not been on that part before and the views across to Black Coombe, Caw and the Old Man of Coniston and the rest of the Lakes hills was unusual and dramatic bcause we had enough height to be able to see these hills with the whole expanse of Morecambe Bay stretching out below them. Magic.

We had speculated about being able to match the appeal of our recent walk in the Hindburn valley and we reckoned that they both deserved equal merit. 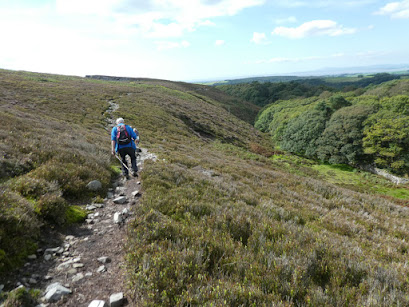 N.b. - The underlining on the captions is happening randomly in New Blogger and whatever I  do I can't remove it. Googling tells me others are having the same problem.

I enjoyed your write up as much as the walk itself. Brilliant.
It may be a while before you see my version for reasons you will gather.

I suppose the vicar died happily, having made his mark - a schismatic event and/or a principle of faith that would be rendered for all time with initial capital letters. The rest of us must make do with the caps that kick off our names. I've always been tempted to sign off official forms as roderick but more recently have discovered what a s--t e.e.cummings was and thus that ambition departed, willy-nilly.

RR - The Gotham thing could have been used by he script writers for The Life of Brian. I seem to remember the followers "schismed" within minutes of being established as a group.

My misguided admiration for Fred Trueman was also shattered many years ago when, in my presence, his reply to the simple question "How are you Fred?" was so disgusting there is no way I feel I could print it here.

A great way to spend the last day of summer, Conrad.

I tried New Blogger some time ago and found it to be a leap backwards. It seems that it still has basic defects.

Phreerunner - I agree it is certainly clunky and not intuitive but it does eventually do everything I need it to at the moment. Once you know where the buttons are it's not too bad but they seem to have introduced intermediate steps here and there making it more tiresome. I am typing this in total contrast using my new iMac desk top where everything is working like liquid honey. I am not starry eyed about Apple but the ease of operation most of the time leaves others in Heath Robinson mode.

Sir Hugh - my last few posts have been with New Blogger and it seemed not too bad although I can't see any real advantage over the old one. Glad you are enjoying your new iMac Conrad. Does it have a magnetic HD, Fusion Drive or SSD?

Afoot - Here is the spec. for my new iMac for you to interpret. The next step is to book my session with Apple to
transfer the stuff from the old machine - I am a bit apprehensive about that at the moment.

Thanks Conrad - an excellent choice with the fusion drive and 16GB RAM.

I am always curious as to why a comment has to be deleted.
Who does the deleting?

BC - my comment appeared twice so I deleted one of them. As the blog owner, Sir Hugh can remove the remaining reference to it if he wishes.

BC - As Afoot says the most common reason for a deletion is a mistaken duplicate posting. That can happen quite easily. It may also be that the commenter has decided they want to edit what they have written. I don't think I have ever deleted any commenter's comment myself. I did delete a whole blog post where I had ranted about the bird killing brigade in a certain area which was picked up by the locals leading to some quite scary exchanges, mostly with other commenters - I had tried to keep my own contribution in some kind of check, but my original post had undoubtedly been inflammatory.