In1968. I was working in Leeds. I had a pleasant excursion to have papers signed by our customer Claughton Manor Brick Company at Claughton in the River Lune valley.

I have passed through there many times since and pleasant memories recur. The financial director's name, Mr. Stirzacker, has remained with me; strange how odd trivialities remain in the mind when more significant ones are forgotten.

The company has made bricks since 1898. Current production runs at around fifty million bricks per year. Clay is excavated from the moorland edge of the Bowland Hills high above the factory and is transported by a mile long aerial ropeway carrying buckets of the material. It all looks somewhat antiquated, but recently their license for extraction was given another eighteen years, and they have a policy of progressive restoration as they work through the available resource.

Our walk followed a steep bridleway to the east of the aerial buckets. The ascent was steeper than we expected and prolonged and combined with hot sunshine it was quite a huff-and-puff.We had passed by the entrance to Moorcock Hall, the residence of the Oystons (less said.)

At the top we crossed under the buckets and by devious means managed to have a limited view of the clay pit and ancillary buildings.

Further on a restored farm house had a view right across the Lune valley with the Lake District hills beyond and the bonus at this elevation of seeing the whole of Morecambe Bay providing a carpet in front of those hills. Here the owner was talking to a farmer type on a quad bike - we had a few words, but further on the quad bike guy stopped and chatted to us. He was the kennel manager for the local hunt. He told us they were continuing the traditions but with the substitution of an aniseed trail. When we asked about how the trail was laid his answer was akin to some inexperienced politician trying to answer awkward questions from Andrew Neil.

We decided on a quick there and back through the wind farm of Caton Moor to visit the trig point. As we passed the closest windmill a couple of hundred yards away I looked up and said to BC "what's that on the blade, a crashed seagull?" My sense of scale was not working properly - we looked closer. Wow! It was a man!

Some work was afoot and there had obviously been an abseil from the top. Such a rare sight demanded much effort holding still my camera on a long zoom.

After this longish unscheduled delay we pressed on to what one might say was the aunti-climax of the trig. As we returned there were now two guys up there and they waived to us. We were tempted to shout out and ask them what was the grade.

A long hot descent on tarmac took us back down to Brookhouse  and then a pleasant stroll up what is perhaps the best section of the river Lune. It had all been a bit overpowering in this unexpected mini heatwave but a most worthwhile and characterful walk. 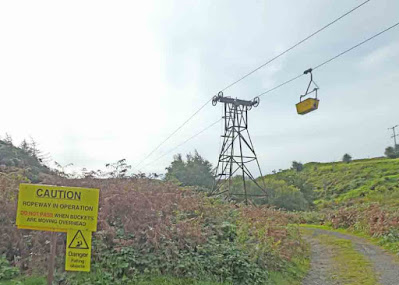 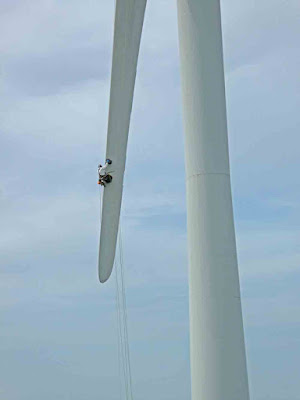 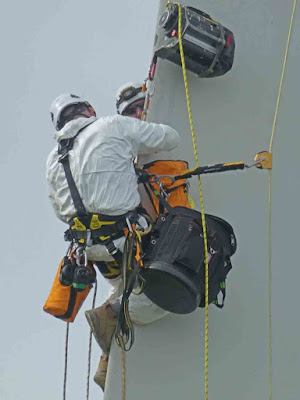 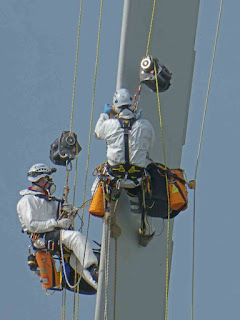 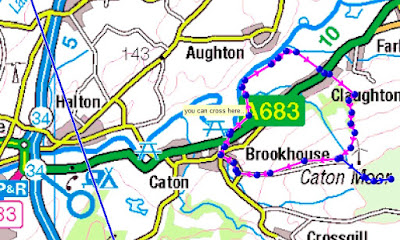