I have just read the latest post from Gayle and Mick http://gayleybird.blogspot.com/ They are planning the Kent to Cape Wrath diagonal for next year. There is mention of a trying day, and an extract from their journal on their LEJOG walk which brought a wry smile to my face because I encountered similar problems at the same place. This prompted me to post this extract from my journal.

There had been terrific winds and rain in the night and The Terra Nova did its business again; no complaints.

The rain stopped briefly as I packed up but started again. The route went on forestry road for a while, but then I spent ages looking for a path branching off up a very steep hillside. Much new forestry road work had been done here and the profile of the road altered, and I suppose the start of my track had been obliterated. In the end I took a compass bearing from a known GPS reading and went straight up the hillside which consisted of felled forest, bracken and thick heather. After fifteen minutes I hit another forest road and then found my track leading off it.

This track went endlessly upwards and I was walking directly into at least a force seven gale and driving rain which persisted most of this very demanding day. The track ended and became a path which then disappeared necessitating walking on a compass bearing across several kilometres of featureless moorland and bog and peat hags to reach a river. The river cut into a ravine and every few hundred yards side ravines fed into the main one and all these had to be negotiated steeply down and up with no path. Even looking at the map and taking GPS readings in these conditions is a trial. At a point which had to be identified I branched away from the river to climb over a pathless bealach and descend to Loch an Daimh. The route now followed the edge of this loch to arrive at last at the bothy. It was 4:30pm. In the past I have poked a bit of fun at bothies, but I’m telling you that when you need one they are the best thing in the world. 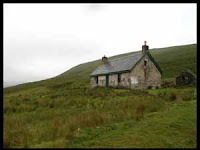 I was not exhausted when I arrived, but fairly damp and starting to get cold, but I was elated to have managed this tough journey properly and under control. It had only been about eleven miles, but it had taken me eight hours.

I had a hot cup-a-soup and then got into my sleeping bag wearing my Berghaus Primaloft jacket and dozed until 6:30pm on a proper bed in the upstairs room.

After I had made a proper meal I decided that the upstairs room was colder than downstairs so I put my Therm-a-rest on the floor and I had found an old duvet upstairs which I put under and over the Therm-a-rest with my sleeping bag sandwiched between them, and I had a surprisingly good night. Prior to retiring I made sure that all my food was stowed in the rucksack and no scraps left about so as not to encourage mice or rats.
Posted by Sir Hugh at Sunday, September 20, 2009