On Wednesday I walked a ten mile round from Sadgill in Longsleddale over Gatesgarth Pass, down to the head of Haweswater, then climbing to Nan Bield Pass via Small Water ,  dropping into Kentmere and finishing over the Stile End bridleway back to Sadgill. 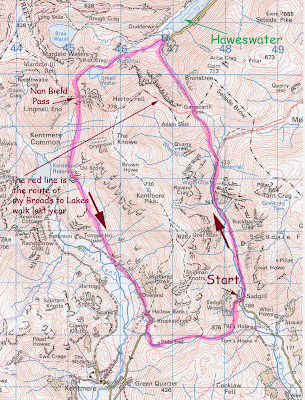 I have walked most of these paths before usually incorporating some of the surrounding tops forming the Kentmere Horseshoe, but in view of low cloud and dull weather I chose this summitless circuit.
Sitting at the stone bench shelter at Nan Bield having a munch and coffee I looked ruefully to the east up the steep rocky path dropping from Harter Fell where I could see the scene of my tumble last July when I cut a vein in my shin ending my intended east/west traverse from Lowestoft to St Bee’s Head on day twenty eight. That attempt had to be renamed “The Broads to The Lakes”.
At the isolated houses on the track to the Kentmere village road I was taken by surprise when I saw a gleaming vintage sports car outside a garage. The owner was inside and said he had spent fourteen years restoring the motor which he described, I am fairly certain, as a Wolseley 21/12 registered in 1933. He had bought the car in Kendal as a pile of scrap, and it is now nearly completed. Subsequent searching on Google failed to find any details of this model, which I was told had a straight-six, 2.7 litre engine with overhead camshaft.
The restorer was also a walker and told me that my route was referred to locally as “The Low Level Route” . Considering I had climbed three major Lake District passes involving 3,200ft of ascent (according to GPS) this struck me as a somewhat coy description.
Posted by Sir Hugh at Friday, March 18, 2011