I have never liked the Ordnance Survey 1:25000 map. The colouration is too uniform and anaemic, and I don't get the immediate picture of the terrain as with the trusty 1:50000, and the one kilometre grid lines are difficult to see.

I have a bad memory of my 1:50 Northern Lakes which I spent good money having laminated. Those maps are massive, and this should never be opened in wind of more than an ant's breath. On top of Hallsfell Ridge nearing Blencathra summit with Tony I disobeyed the rule - the wind was so strong I was carried several feet off the path - the map set off northwards like a paraglider. I imagined some guy in a street in Carlisle heralding its arrival on air, and wondering. That is the second time I recall abandoning a summit attempt because of wind. Now here's a thought: perhaps that wretched map could be put to good use doubling up as a paraglider saving knees on those punishing Munro descents?

My post op walking, has been relegated to farmer's-field-footpaths with hedges, walls, barbed wire fences, and rickety stiles, and gates tied up with orange furry string impossible to unknot.
On Saturday I walked  seven miles with about 850ft of ascent across such terrain, which whilst pleasant to view is irritating to navigate. I was using my Memory Map 3500 which carries OS 1:50 mapping.
The GPS projects a direction of travel arrow, so when following a footpath on the map you can adjust your direction to keep the  arrow on the path on the map, and yourself on the path on the ground. If you let the arrow deviate by, say three millimetres that is enough on the ground to have you on the wrong side of a hedge, necessitating wearisome backtracking. The paths I was walking were new to me, and apparently rarely used being indiscernible on the ground. Now I have to concede the denigrated 1:25 map can be of use on this terrain because it shows field boundaries, but to have the whole country on Memory Map as I have for the 1:50 would be outrageously expensive. 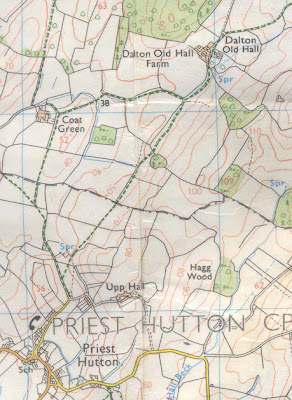 I am looking forward to paths above the cultivation line where I know what I am doing, with my route printed on A4 from the 1:50 map which is usually enlarged from the original, because my printer is set to fill the whole of the A4 if the selected area from the map is smaller, which it usually is.

Apart from "trusty" the writing style of this post is more concise, more direct than usual. Much better, in fact. One comparatively unimportant defect got me thinking: "orange furry string" should be "furry orange string" but I'd be hard put to say why. Ask Terry.

However, a warning about using parts of OS maps as illustrations. The OS can be very tough on this and requires quite prominent waivers.

I've only just noticed but the yellow trace on the map of Britain (indicating Lowestoft to Patterdale) is virtually invisible.

I understand that there is now a middle way for maps. The people whi produce the A to Z guides are now producing OS maps in a booklet format (1:25) and that Lakes are one of the first. Such a format will stop the para gliding effect. I recall my brother -in-law (Yorkshireman) who had new map of the Berwyns and foolishly opened it in a high wind. He chased it for a considerable time whilst I sat down and had a coffee!

l da P - I take your point about "trusty". I am trying to avoid use of well used, partnered words - I may have referred to the 1:25 map as having a "redeeming feature" but avoided that - there are many such examples, and their use tells me that the writer has chosen to be lazy, and not bothered to try and say exactly what they mean.

I have a somewhat inferior English usage book and it gives the following guidelines for adjectival order before the noun:

It doesn't specifically say whether the order should be as listed in each section - if that was the case "orange, furry" would be correct. The way I see it is that I would place first what I wanted to express as the more important attribute, and in this case, for me it was the colour.

I looked up the OS copyright thing and found incomprehensible stuff on their website. A phone conversation lead to total fence sitting by the guy who answered, and he suggested I should email my query to Customer Services which I have done, and now await a reply. I may follow up with a post about this.

If you look at my map of routes now, you will see that it has been revised, hopefully to your satisfaction.

Welshpaddler - I will keep a look out for the A to Z thing. The trouble with selective maps is that I always seem to need the bit that is just off the publication, and that is why I opted for the whole of England. Wales and Scotland on Memory Map. What we need is for OS to produce a map at say !:30 which shows field boundaries. I think Harvey's do something like that, but there again, only for selected areas.

I'm not sure what you implied defining your brother-in-law as a Yorkshireman - presumably your prediction that he would be loathe to fork out for a new map? I was born in Yorkshire, but now see the folk there more objectively - they can be downright rude, but I still love the Yorkshire Dales.

Good luck with your op. Are you having an arthroscopy or a full knee replacement?

The op is an athroscopy and hopefully will do the trick.

I had another bike ride today lots of (in my opinion) cat. 2 hills, but probably described as flat by the Tour guys.

I'm a bit late responding here, but are you aware of Grough Route (www.grough.co.uk/route)? Unless they've changed their pricing in the last couple of months, it costs £2 per month to subscribe, with no contractual tie-in. So, when I want 1:25k maps, I subscribe just for one month and print the sections that I want (there is a limit on pages you can print, but you can buy more for a few pence). It works out much cheaper than buying real maps for all of those areas we walk through but are unlikely to visit again (my local 1:25k maps are very well used; there's a lot of farmland around here!).