Cabin fever has been tested to the limit.

The knee has improved recently. It may be too early to attempt backpacking again, but I have decided to have a go and see what happens. I bought a senior railcard, and I have booked a train ticket departing Arnside at 7:01 am Monday 3rd June, arriving Lowestoft at 2:50pm.

The route, starting at Lowestoft and finishing at Poole, which is the start of the South West Coast Path,  was plotted before my knee replacement. At that time I planned to return in a circle to Lowestoft via The New Forest, Salisbury Plain and The Ridgeway etc., but for the moment I would be more than pleased if I could get as far as Poole. If the walking is not viable I could be back home in three days. it would be interesting to see if I could return in stages using my bus pass.

My son has voiced concern about me walking through the eastern suburbs of London which was something I had not considered, but there will be no wild camping there.

The route should be relatively flat, and I will only need to carry food for one meal giving me a pack weight of around 21 lbs or 9.5kg .

Unfinished business could be nailed. Regular readers will remember that I thought I had done all the Marilyns in England south of Cleeve Hill and Bredon Hill near Cheltenham except for Haddington Hill in Buckinghamshire; that was until I discovered an appendix in the book adding nineteen newly discovered tops, four of which were in that southern area. One of those is near Folkestone, and the others are within easy reach of Poole so we will have to see. 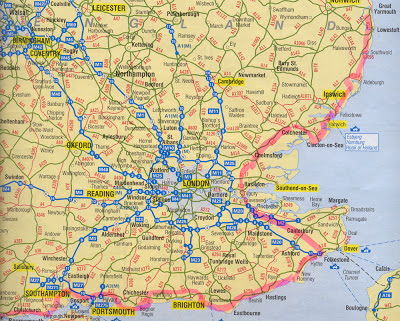