Back in the sixties and my early climbing days there were often  rumours of prominent climbers of the day working on a "secret crag." And even the populated ones were unofficially claimed by a particular doyen as their personal territory for the working of first ascents - Alan Austin and Langdale, and I think White Ghyll in particular, is one example. I will come back to that shortly.

Over the last year or so my Thursday walks with Pete have been restricted to Tarmac only, and as much as possible level walking, and under three miles, in consideration of Pete's advancing years and his rheumatoid arthritis, although the latter is now pretty well controlled with a shed-load of pills. But since my knee op I have been restricted to similar parameters so we are now more equally matched.

We start from the attractive village of Bouth where a Tarmac cul-de-sac road leads for  a mile or so to finish at Hay Bridge Nature Reserve . This road is quite undulating with several fairly steep uphill and downhill sections, and I feel a bit guilty having sandbagged Pete into something a bit more arduous, but he seems to cope well and most of the time he is walking better than  me, especially on the downhill sections. I don't understand the internal mechanics of the knee, but I imagine when walking downhill the joint is allowed to dangle and this seems to cause more pain than walking uphill when the action, in my mind, is more consolidated.

The road is often unfenced which gives an air of freedom, and a less successful attempt at conquering nature. The views down to the Rusland valley to the west and the hummocky hills rising to the east make for attractive walking. We pass a small wooded tarn on the right with a hide being part of the nature reserve, and then a larger and much prettier one on the left - there is a grebe, head erect, traversing quite rapidly.

Harking back to my climbing days I  always had a sort of fantasy of discovering a secret crag, and although I know this is quite unrealistic, especially these days, I can't help being on the lookout, and as we walk down the road I spot one such possibility high on the skyline to the west and manage to get a zoom photo. Looking at that photo now it is difficult to assess the scale, but the crag looks as though it could give a bit of entertainment on a sunny summer afternoon, but all is a bit dingy today, which is demonstrated by the dull quality of the photos on this post, but either you get those photos or nothing at all. The map shows there is a footpath going close to that crag and although it is not access land there are no field boundaries between path and crag so I might have a walk up there one day to have a closer look, but today it would be too much for Pete.

Our outward walk terminates at Low Hay Bridge House where there is also a converted barn being the headquarters of the Hay Bridge Nature Reserve with free access and a wealth of information for nature lovers, and all facilities for meetings and the like.

Total distance there and back 2.84miles. 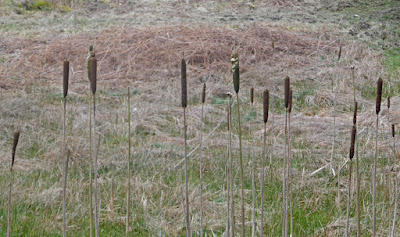 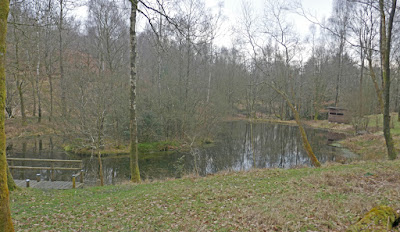 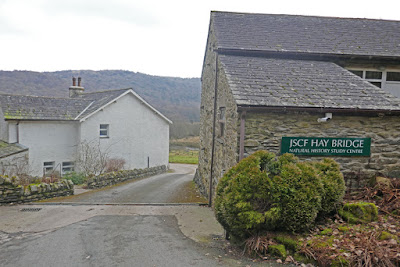 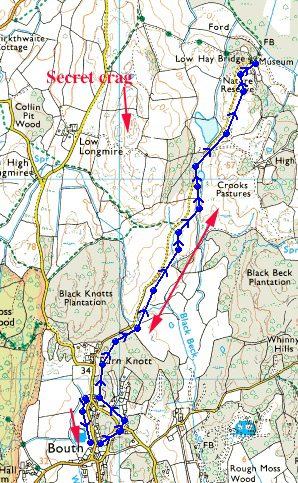