"You hurry to a spot, that's just a dot on the map
You're hooked, you're crooked, your caught in the tender trap...

...and soon there's music in the breeze"

I spend a lot of time browsing the map. There are many locations I have earmarked to visit some day, usually because of some building or  feature set in unexpectedly remote, or out of character terrain. I am a born nosy parker.

Although I have walked the ridges to the north-east and south-west of Bannisdale (see map below) one of my earmarks for many years has been to walk up the track to see the isolated farmstead of Bannisdale Head nestling tightly under the steep head of this wild valley.

This was not a romantic encounter like the song, but it was similarly uplifting, and that phrase "dot on the map" has always fired my imagination.

When ticking off Wainwright's Outlying Fells with Bowland Climber (9th may 2016) we parked near Dryhowe Bridge to ascend Whiteside Pike, and walk the Bannisdale horseshoe. There was just enough room against piles of road stone at the end of the public road. Today those piles had increased and I couldn't find room, nor anywhere else within reason. Looking at the map I saw footpaths came in from Thorn Cottage further north back up the A6, so I drove to set off from there.

At the start a sign indicated I was initially on part of The Millers Way, a long distance path I had not previously heard of running from Kendal to Carlisle named after Mr Carr the biscuit man who moved his business from Kendal to Carlisle in 1831, supposedly using an approximation of this route - looks interesting - could it be dome in bits using public transport?

A boggy climb and traverse got me back over into Bannisdale to emerge only a couple of hundred yards from where I had been unable to park. I immediately realised that if I had continued from the end of the public road there would have been plenty of room to park through the gate just the other side of Dryhowe Bridge - ah well.

All was silence up Bannisdale with intense blue sky, a nippy wind to walk into (...and soon there's music in the breeze")  and providing welcome assistance on the return.  High valley sides with craggy outcrops and intriguing, mysterious gorges gave a sense of enclosure, and just peaking above the skyline at the end of the valley toppings of snow on higher, distant Lake District hills.

The farm house at Bannisdale Head was apparently unoccupied but well maintained, as was the Land Rover track I was walking on. It looks as though the farm and its buildings are used more for storage or an advanced base for farming management on the hills. I found a convenient stone to sit on and had my sandwich and flask of coffee and quarter of an hour of quiet contemplation.

The round trip was 5.5 miles - average speed including the food stop 1.2 mph. That is the longest so far since my knee replacement eleven weeks ago - I was in no hurry. 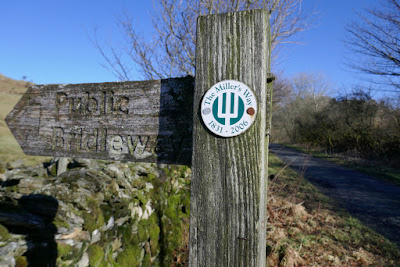 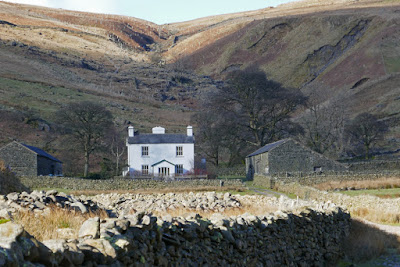 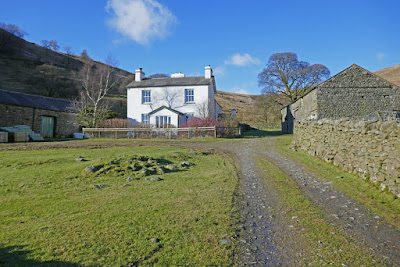 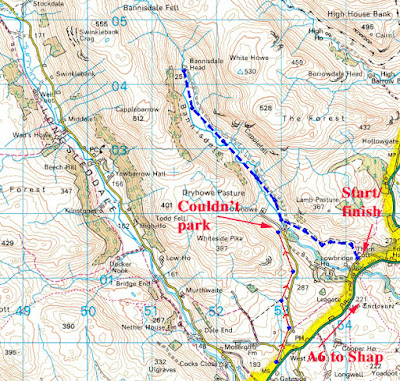