We reckon car logistics have been stretched to their limit now. We both managed to arrive at Salts Mill visitor car park by 9:00 am but only because we had set off in good time - heavy traffic at rush hour hampered us again on the drive to our previous finishing point at Oldfield SD 993 377 where we found our minor road closed near Moor Lodge Farm SD 979 379 enforcing another time consuming diversion. We eventually started walking at 10:00 am.

After all that car time we had a few problems with footpath closures and fiddly navigation until we eventually met up with the River Worth at the bottom of Hey Lane - SD 020 376. From there the walk following that river all the way to Mytholm was the highlight so far on the whole walk - idyllic green-turf-paths with the river sparkling and chortling on our right, and bright sunshine, warmth and a balmy ambience redolent of other summer days.

There is very little modern building in these parts, just single cottages, farmhouses, rows of cottages, and seventeenth century mill owners houses all built from comforting yellowish stone glowing in sunshine today. At Mytholm we left the River Worth now on its way to join the River Aire which we would be encountering later further downstream. A steep road climb took us onto the high ridge heading for Harden with that top-of-the-world feeling and views all the way back to our starting point high up the Worth valley - splendid. At the start of that ridge above Mytholm was an unusual expensively stone built mini housing development like some ostentatious commune for the nouveau riche with everything a bit over-the-top especially the fancy, golden gates.

After crossing Keighley Road we spotted Catstones End, an apparently quarried outcrop on the horizon and we pondered about its climbing potential. I found little information from Googling - BC may do better?

From Harden we walked through St Ives estate with broad paths and mature woodland being aware that there is much more to see there:

Bingley St. Ives, or St. Ives Estate is a 550-acre country park and former estate between Bingley and Harden in West Yorkshire, England now owned by Bradford Council. The park has Grade II listing in the English Heritage National Register of Historic Parks and Gardens of Special Interest. Wikipedia

Old bridleways lead down to Beckfoot and its attractive pack-horse bridge where we now joined the River Aire following to Cottingley Bridge only about a mile from the house at Cottingley where I lived shortly after being married.

This is probably the last attractive part of the Aire before it runs into more industrial surroundings and eventually giving itself up to the Ouse. We arrived st the Leeds Liverpool Canal and walked on the opposite bank back to Salts Mill as the sun lowered and the light became even more golden. This has been the best day's walking so far for this project.

Heavy traffic slowed our return to our starting point and by the time I left BC it was dark, and on the narrow country roads there were no road markings, making for stressful driving until I got back to Laneshaw Bridge and civilisation, and it was 7:30 before I arrived home. 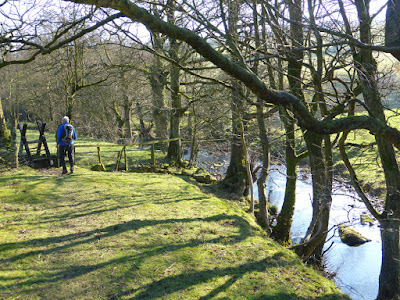 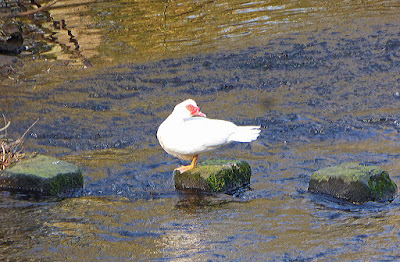 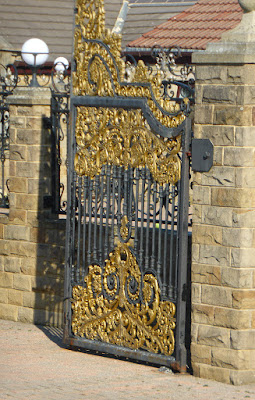 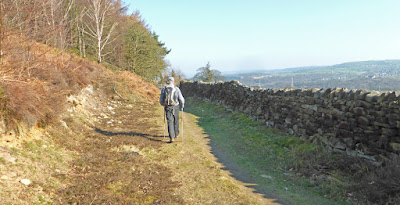 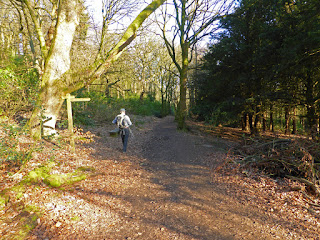 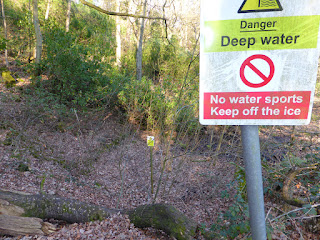 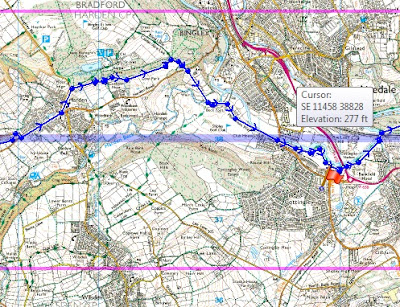