I had plotted the route to start from the east end of Ponden reservoir - Google Earth had shown me  ample parking in the entrance to the road over the dam. I arrived early, took photos in the early morning sunlight - what a fabulous warm day - and drank coffee from my mini flask before BC arrived. BC had identified a better finishing point from the road high above Ponden to the north so we de-camped to leave a car at the new terminus, then we drove to Nelson.

We walked though the attractive park in Nelson and it is to be hoped local authorities will still be able to maintain these spaces often donated by wealthy philanthropists in Victorian times.

We had spotted a supposed hill fort on Little Gib Hill and diverted to investigate - like many such antiquities marked by OS this turned out to be what I call a figment of the imaginations of zealous archaeologists.

At Doughty Farm we were pestered for several hundred yards by a pesky, snappy Jack Russell. Between that farm and Wiil 'o th' Moon farm we encountered the first badly cow trodden fields on the whole of this project so far. That was coupled with a network of baffling paths, hard to navigate, especially with the distraction of that little dog and its mistress chasing behind ineffectively trying to recall it.

Better walking ensued as we sauntered through pretty Trawden then crossed and followed part of our Bronte Way path from May last year south of Wycoller. We chatted with two young lady fell runners - inspirational they were - getting out there doing their stuff.

We were now into a  stretch of wild moorland with a decent path leading to Watersheddles Reervoir -   my kind of walking. We found the path between the edge of the reservoir and the road this time having irritatingly walked down the road on our Bronte Way trip.

From the end of the reservoir we were on the road back to the car, but from the higher branch it was quiet and culminated in fine views of Ponden reservoir far below making us appreciate BC's wise decision to follow this higher ground.

Another excellent days walking with all day sunshine, but much haze in the distance and a massive contrast from The Beast from the East we were experiencing at this time last year.

Worth clicking first photo for slideshow 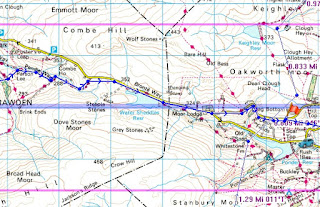 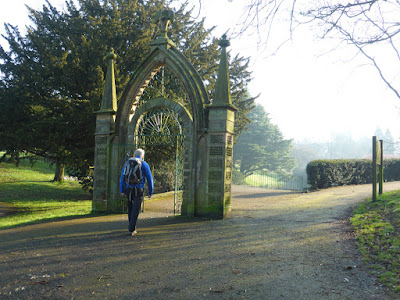