Ok, I know it's not strictly a verb but I like it, and why not?

Finding the source of a river sounds romantic - a picture of a bubbling little stream emerging from a hillside on a balmy summer's afternoon. From my experience it isn't. Sources are usually located high up, in the middle of nowhere with no footpaths where one imagines human foot never trod. When you arrive there is little to see and where the map shows emergence, no sign of water, especially in summertime. But if you want to walk the whole length of a river you have to start at the source. I avoided it with the Severn Way only starting at Shrewsbury a cowardly sixty eight miles from its source.

I fancy doing the Eden Way sometime but this section does not lend itself to inclusion in the first backpacking day and getting it out of the way now would leave a comfortable eleven miler to Kirkby Stephen ( assuming I could get somebody to drop me off at Aisgill Farm.)

It may have been a subconscious indication of lack of enthusiasm or perhaps prescience at this outing when I slept in and started an hour later than intended.

The signs were not good when I left a glorious blue sky sunny morning somewhere the other side of Sedbergh and drove into cloud which persisted until 11:30 am after I had started the walk at 9:50 am. I had only been able to find parking at the railway bridge over half a kilometre south from my start at  Aisgill Farm.

I had a chat with the farmer and I think he had doubts about my ability to find my way in the gloom, and although I don't see myself as an aged gent who should not be venturing into the fells I suppose others do.

I had immediate contact with the River Eden as I crossed a footbridge out of the farm, then veered off until crossing again by a deepish ford at Hellgill force, but just managing to keep my feet dry. The waterfall was not  easy to photograph.

The river swings east and then north from here running over solid limestone with dark brown but clear water pools between energetic waterfalls.

At the well named Hellgill Bridge I peered over the stone parapet to look down perhaps fifty feet below at the river cutting a narrow gorge through the limestone, much overgrown with trees and quite impenetrable and beyond the ability of my camera to show.

There was a track through the moorland veering away from the river until the track had to be left to cross rough country and ascend more steeply to Lady's Pillar, and Eden Springs the source of the Eden. An hour or so earlier the sun had penetrated the cloud and cloudless blue prevailed until I approached Hell Gill Bridge on the return.  As I had expected there was not much to see, just a dry stream bed - I was now at 689m. (2260ft.) and it was much colder, but since the sun had broken through the surroundings were moorland perfection with views in all directions and a few clouds still lingering here and there as inversions below surrounding hills - it was now a good day to be out. I couldn't find the track I had used earlier until nearly back down to Hellgill Bridge and it was time consuming over rough heather and tussocks.

Voices came from behind as I rejoined the track, they came from a couple out on a longer trek than mine I think. Their car was parked at The Moorcoock and as they still had a long way to go and the light was beginning to fade they asked if they could walk out with me and get a lift back to the Moorcock. This couple were good company, helping to lighten the tiredness at the end of a more strenuous day than I had bargained for. The couple (sorry, never asked your names) own the café at the trout farm at Kilnsey and have an interesting history of catering and skiing in the Dolomites and elsewhere. Thanks to them I got a much better shot of the waterfall on the way back. That was where we re-crossed the ford and at this time of day I was less concerned about keeping my feet dry.  I realised I had walked nonstop for just over six hours without a break for the snack and coffee I had brought. We drove off down to The Moorcck through thick fog with some care. Fortunately after that the fog cleared and I was back home for about for 5:30 pm for a well earned hot bath. 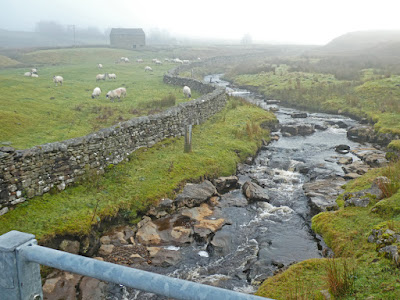