At eight this morning I had to stop the car and take a photo. The Langdale Pikes were illuminated in the morning sun with an intensity of vibrant russet. A view of The Pikes I know is perhaps the most frequent cliché landscape photo in England, but this was exceptional. My photo only goes halfway to capture the ambience and vibrancy I experienced. 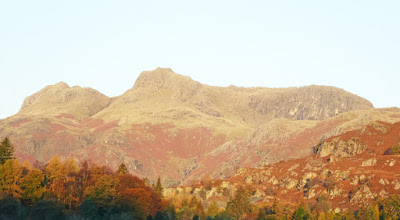 I rendezvoused with BC at The Old Dungeon Ghyll. We drove in my car over Red Bank to our start at Mill Bridge north of Grasmere. At a sheet of ice on this steep hill I had to stop to let an oncoming car through. Re-starting was not easy but zig-zagging with the front wheels got us through.

Our parking at Mill Bridge and the walk down the lane to Grasmere gave us changing views back up to Grisedale Hause and our route of two days ago.

Fifteen minutes in I realised I had left my iPhone in the car. That was a worry on two counts: security, and mapping on Memory Map. BC was carrying Nick Burton's guide to W's Way so the latter wasn't too serious... or so we thought.

Grasmere had our attention for some time - Sam Read's Bookshop, established 1887, had a an eclectic display of titles in the window. The church gave a visit to Wordsworth's family grave, and of course I had to purchase a supply of Grasmere gingerbread from Sarah Nelson's.

We climbed out past Allan Bank, Wordsworth's home for some time, then up to Silver How (395m.) a new Wainwright summit for me - unlike BC, I have have not "done" all the 214 Wainwrights having being distracted by Scotland and France at a time when I may have targeted them, so this was only number fifty for me.

It was now, or to be accurate, shortly after leaving the summit, that we regretted leaving Memory Map and GPS in the car. Up until now Nick Burton's Wainwright's Way has given a well described route but it now seemed to have lapsed into vagueness. How many times have I preached the wisdom of taking a bearing to leave a summit? But no matter, I had my iPad Mini in my rucksack with its own Memory Map - the wretched thing decided to play up and only intermittently gave us any help and we wandered. As it happened we didn't walk much further distance than Burton's route. The tracks he advocates are not shown on the OS map. We descended steeply with much care, on on a perilous path that was more a figment of imagination, until we hit the traversing path leading to Harry's Place and the Langdale road.

A few yards up that road off to the left  a new engineered path runs parallel with the road and a field's width away to arrive at the New Dungeon Ghyll. From here the low level path leads from the National Trust car park back to the Old Dungeon Ghyll.

We both soaked up the views of iconic Langdale climbing crags, the two Scout Crags, White Ghyll, Raven Crag and Middlefell Buttress, and we reminisced  unashamedly.

Back at the Old Dungeon Ghyll we called into the climber's bar for refreshment and entered with trepidation expecting ruination, but it has remained exactly as was and even the famous Festerat Wallendia mural is still there - I am generally in favour of progress, but some things are sacred and we were able to sit there and remember our days of youth without what might have been sorrow if changes had been made..

The topic of the  ODG had an airing in the comments to my post in August last year and BC included an article written by Tony Greenbank, a Guardian journalist  living in Ambleside and well known to us in our climbing world. I reproduce the article below. The other comments on that post are worth a look:

I recommend also BC's excellent account of this pleasurable and nostalgic day:

It is cool in the ancient bar – once a shippen – with its spit-and-sawdust feel. Walkers arrive sweating from their travails over Esk Hause and down by Rossett Ghyll and rock climbers who have climbed on Raven Crag sit with their pints and ropes coiled the modern "butterfly" way on benches in the stalls where cows were tied. Occasionally their eyes fix on a dark, lacquered mural of a black-bearded climber being borne aloft by cherubs, pint in one hand and ice axe in the other.

Above, Venus reclines on a cloud while cooking on a Primus; inscribed are the words Festerat Wallendia. Festering is what rock climbers in the 50s, called languishing in Langdale when it rained, and Wall End Barn was their abode. It was painted by art student Shirley Parfitt, who has since made a career in the world of design in London. Sid and Jammie Cross, the hotel's proprietors, gave her free bed and board during the month she created her masterpiece, using freshly laid farm eggs from the kitchen (not without some protest from Mrs Cross) for her egg tempera method. "There were so many interruptions as the evening progressed," she says. "It was all great fun. In the early hours I might find myself dipping my brush in my beer and sipping my paint water."

Once the rambunctious assembly who inhabited this climber's bar was singing the Red Flag, the song of the Labour party, when through the door from the hotel stepped Winston Churchill Junior (said to be still at school at Marlborough College). "I say you chaps," he broke in during the stunned lull that followed his appearance, "will any of you take me rock climbing tomorrow?" No one spoke. Then Black Jack, a technical college lecturer, now immortalised in the mural, did the honours up Middlefell Buttress, the launchpad for so many climbers since Siegfried Herford and friends first pioneered the climb in 1911.

CLICK FIRST PHOTO TO OPEN SLIDESHOW OF THE REST